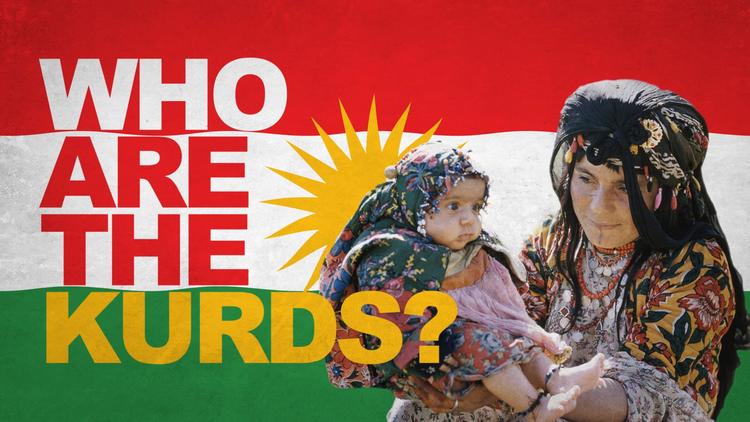 There is something incredibly odd about seeing the black flag of the so-called “Islamic State of Iraq and the Levant (ISIL)” flapping in the wind; particularly when you see it, not on a television screen, but through a pair of binoculars.

Today my journey led me to the front line dividing the Kurdish forces or “Peshmerga” from what has been called the biggest threat to the region and the world– the dreaded guerrillas of ISIL. Talalward is one of several bases in the province of Kirkuk that is now held and defended by forces of the Kurdistan Regional Government (KRG, a super-province of Iraq). Not only is Talalward one of the villages closest to the front line with the so-called Islamic State, it also protects two gigantic oil operations and one core electricity plant, which are just as much visible from the trenches as the ISIL black flag. in addition, this front is closely connected to the main Kirkuk compound K1, a former iraqi army area that was reused after Iraqi troops left, and from there it is only another 15 minutes into the city.

Even more surprising then, in an area like that, is that I found rather relaxed expressions, smiling faces and the offer of hot tea, while several cameras and phones where clicking in an ongoing rhythm, documenting the uneasy frontier. I could not help but wonder about the weirdness of this situation. I was trying to wrap my mind around how to feel about my own journey. After all, the only only frame for such travel I had previously had was a bit of tourism abroad. Given that I’m in Kurdistan for research, the scene I am describing is a sort of 21st century academic tourism, celebrating a bottom-up approach to the gathering of knowledge — one that was applauded by the people I met at the front.

So there, sipping tea and taking pictures, I had the voice of my driver and translator in my ear, giving me a glimpse into various local reactions to the latest movements of ISIL, the problems the Peshmerga face with the local Arab population, and the most prominent front lines of the current conflict, from Sinjar to Kobane. I was even lucky enough to sit in with my translator and host on a gathering of generals coming from the Ministry to check on the front.

Visiting the front was eye-opening. I will not share details on the composition of forces, their equipment or precise locations, in order to not endanger the soldiers. But I can report some basic impressions. I was struck that the fighting did not resemble the almost acrobatic tactics shown in film clips from ISIL and rebroadcast in Western media outlets. What I saw reminded me more of the indecisive, interminable trench warfare of World War I. I conclude that the Peshmerga are not there to take territory but to defend Kirkuk, and that they are dug in for a long fight.

Second, I was surprised by the continued vigor of the Peshmerga military leaders. After their poor showing when ISIL advanced on Erbil recently, they were sometimes derided by European and American military strategists as “old men with a belly.” My impression, in contrast, was that they still have a great deal of esprit de corps, growing from their conviction that Kirkuk belongs to Kurdistan and that those who fall fighting for it are national martyrs, not merely dead soldiers. Some of the older Peshmerga commanders are viewed as legends, who had fought in several campaigns in recent decades, and it seemed to me that their mere presence at the front sparked respect from all ranks and parties. I had a sense that the the men would go through hell or high water for them.

Third, it is not just the old heroes who have joined the front lines. When we were walking into the K1 compound, to meet General Rasul Latif Omar, we saw some colorful fighters. My translator gasped “Oh, PKK.” (The Kurdistan Workers Party or PKK fighters are viewed in Turkey and the US as terrorists against whom Turkey fought a dirty war in its southeast during the 1970s through 1990s; many have now taken refuge in Iraqi Kurdistan, and they played an important role in the relief of the Yezidis at Sinjar). When I asked him how he knew, he responded that they were easily recognizable because of their footgear and clothing. I could not myself make heads or tails of the non-uniform uniforms, which, on all levels from shoes, gear and insignia resembles nothing less but a confusing jumble. So I’ll have to take his word for it that the men in traditional Kurdish clothes with several AK-47’s and MG’s around their shoulders were indeed PKK. I was informed by others in the front line meetings that there are indeed several PKK members fighting at the lines around Kirkuk lines. After all, despite the fact that the territory where Kurdish is spoken is divided among five national states and their own KRG parties disagree upon a few things, they still feel that the Kurdish nation needs to be defended.

I was surprised to discover from these meetings that there was a new sense of solidarity and security in the oil-rich city of Kirkuk itself. Long a site of conflict among Turkmen, Kurds and Arabs, Kirkuk province under the Saddam Hussein regime had seen Kurds expelled and Arabs brought in, in an attempt by the regime to change its ethnic mix. After 2003, many Kurds returned, while some Arabs left. Still, Kirkuk, both the city and the province, remains mixed, with Kurds, Arabs and Turkmen. According to my informants, the ethnically diverse city has actually become safer since the ISIL set up camp nearby. After the Iraqi army fled rather than stand and fight the ISIL advance in the north, the Kurdistan Peshmerga stepped in to provide security and defend the city, substantially increasing their troop strength there. As a result, I was told, the city turned from a site of frequent bombings and conflict into a place of relative stability. The Kurdistan Peshmerga are now holding the many front lines around the city and guarding its most valuable energy projects.

In retrospect, this development, if it is being accurately reported to me, does make some sense. Given a single security force with a firm line of command, there can be no further debate about whose responsibility it is to keep the city safe. Some Kurds even hint darkly that some elements in the now-departed Iraqi army itself had been responsible for some of the bombings, saying that bomb-making equipment had been discovered in a section of the K1 base. Despite the departure of the mostly Arab troops of the Iraqi army, and despite the decline in bombings in Kirkuk, the distrust among Kurds of the Arab population in the area remains high. High, too, are Kurdish feelings of pride insofar as they have demonstrated their ability to Keep both the front line and the city stable and safe.

The fame of their enemy is the only thing that makes these forces in Talalward special. It is that these Peshmerga fighters are unified under the Kurdistan Ministry of the Peshmerga. While you might assume that this line of command would be normal, in fact it is rare and a special characteristic of this region.

Within the Kurdistan Regional Government (KRG, a super-province of Iraq) life, territory and the security sector are divided along party lines between the Kurdistan Democratic Party (KDP) and the Patriotic Union of Kurdistan (PUK). it was only after the U.S.-led invasion of Iraq in 2003 that patterns began to shift, cooperation began to increase and some change occurred, insofar as yet a third political party was brought into government, ironically even called “Change” (Gorran). Still, despite these baby steps toward a more unified command, the armed forces for the most part remain divided. According to recent numbers I came across, there are 200.000 Peshmerga currently deployed (leaving open the question of whether and which paramilitary units are included in this accounting). Given what we know from older figures when there were only 100,000 Peshmerga, about 40.000 of them belonged to the unified forces. It is unclear whether it was the unified or the party forces that have grown, or whether the older estimates were even accurate in the first place.

In any case, with this politically and military tangled situation a given, it is all the more surprising and encouraging to find a united front at one of the most vulnerable spots of the Kurdistan region.

Verena Gruber is in a graduate program at the Centre for Middle East Studies, Lund University, Sweden, and is spending the semester doing research in Erbil, Iraqi Kurdistan.