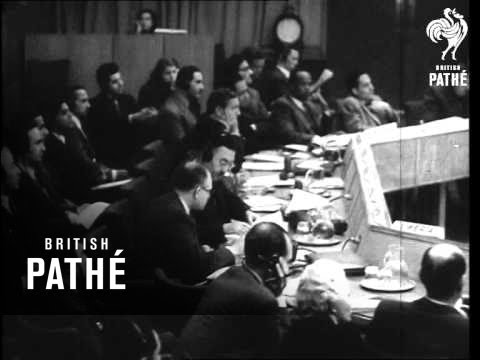 The British Foreign Secretary told Parliament on February 18, 1947 that “there is no prospect of resolving this conflict by any settlement negotiated between the parties.” Further, he said, according to the League of Nations mandate, the legal basis for Britain’s rule over Palestine, Britain did not have the authority to partition the country as everyone thought would be necessary. Thus, the British government had decided to turn the problem over to the United Nations. The Foreign Secretary did not mention, but it was obviously a significant factor, that Britain could no longer afford to keep nearly 100,000 troops employed in an increasingly vain effort to keep the peace in what was in comparison to India a relatively unimportant area.

In response to Britain’s request, the UN Secretary General on April 2, asked that the General Assembly (UNGA) take up the question of what should be done about Palestine. Five of the member states thought they already knew what to do: Egypt, Iraq, Syria, Lebanon and Saudi Arabia, proposed “The termination of the Mandate over Palestine and the declaration of its independence.” Their motion was rejected by the UNGA which instead, voted to establish a “Special Committee for Palestine” (UNSCOP) to recommend a different solution. It should have been sobering to the members of this, the last in the long line of inquiries, to hear the British delegate say,

We have tried for years to solve the problem of Palestine. Having failed so far, we now bring it to the United Nations, in the hope that it can succeed were we have not. If the United Nations can find a just solution which will be accepted by both parties, [we would] welcome such a solution [but ] we should not have the sole responsibility for enforcing a solution which is not accepted by both parties and which we cannot reconcile with our conscience.

UNSCOP was to be composed of a diverse group, representatives of Australia, Canada, Czechoslovakia, Guatemala, India, Iran, Netherlands, Peru, Sweden, Uruguay and Yugoslavia. As diverse as the committee was, its members shared one characteristic: none of them knew anything about Palestine. And they could not expect that they would get a “balanced” view since the representative of one party, the Palestinians, decided to abstain from collaboration with UNSCOP. In default of the Palestinian voice, the general ignorance of the members of the Committee and sporadic demonstrations in Palestine against its inquiry, the Jewish Agency dominated the proceedings.

Despite these problems, UNSCOP set out, or at least signed, a generally fair and informative appreciation of “the Elements of the Conflict” in its Report to The General Assembly. In summary, it portrayed two populations, one European, technologically advanced, united and determined, numbering about 600,000, and the other, numbering 1,200,000, Asian, divided both religiously and geographically into about 1,200 autarkic, self-governing communities and “native quarters” of the few cities, suffering from all of the inherited problems of colonialism, living in one small (26,000 square kilometer/10,000 square mile) area of which “about half …is uninhabitable desert” with seasonal and limited rainfall and access to ground water only from fragile and (what ultimately have proven to be) endangered aquifers. Palestine was almost totally without minerals other than the potassium and sodium salts of the Dead Sea.

The delegates must have thought there was little to divide.

UNSCOP accepted as given, probably on legal advice, that it should work within the intent and functioning of the League of Nations mandate. In retrospect curiously, UNSCOP did not apparently consider the utility of negotiating with and between the Palestinians and the Zionists. Nor, as in various contemporary and subsequent instances of decolonization did it regard the majority community as the presumed legal heir to the colonial government. Only the Arab states thought of turning the “case” over to the International Court.

Viewing the mandate document as tantamount to a constitution for Palestine, UNSCOP emphasized that the Mandatory Power (Britain) had been obliged to “secure the establishment of the Jewish National Home,” to “facilitate Jewish immigration under suitable conditions” and to “encourage, in co-operation with the Jewish Agency…close settlement by Jews on the land…” while it “speaks in general terms only of safeguarding or not prejudicing the ‘civil and religious rights’ and the ‘rights and position’ of the Arab community in Palestine.”

In attempting to balance these unequal obligations, the Committee observed, the “Mandatory Power has attempted, within the limits of its interpretation of the ‘dual obligation’ of the mandate, to provide some satisfaction of Arab political desires,” but such moves “were generally rejected by the Palestinians and vigorously opposed by the Zionists.”

UNSCOP was told that the Zionists demanded the right of “return” for European Jews in numbers defined only by the “economic absorptive capacity of the state.” The Zionist representatives declared, however, that “The immigrant Jews [would] displace no Arabs, but rather [would] develop areas which otherwise would remain undeveloped.” In an earlier communication (March 19, 1899) to an official of the Ottoman Empire, Theodore Herzl had written that the Zionist movement was “completely peaceful and very content if they are left in peace. Therefore, there is absolutely nothing to fear from their immigration…Your Excellency sees another difficulty, in the existence of the non-Jewish population in Palestine. But who would think of sending them away? It is their well-being, their individual wealth which we will increase by bringing in our own.”

The basis of the Zionist claim to Palestine was, as from the beginning of the movement in Theodore Herzl’s words, “Palestine is our ever-memorable historic home.”

In a separate opinion, the Representative of India held that the Jewish contention that they were the “original” natives was both historically questionable and, if held to be the basis of a legal claim, would be a recipe for chaos since virtually all modern states would be open to similar claims based on ancient history. As he wrote,

To found their claim on their dispersion from Palestine after a period of approximately 2,000 years, whatever religious sentiment may be attached by them to the land occupied by their Prophets, appears to me to be as groundless as anything can be. A multitude of nations conquered various countries at various times and were eventually defeated and turned out of them. Can their connexion, however long, with the land which they had once conquered provide them with any basis after the lapse of even one century? If this were so, Moslems might claim Spain, which they governed for a much longer period than the Jews had governed part of Palestine…[moreover] this claim cannot be made by those who were subsequently converted to Judaism. Khazars of Eastern Europe, Turco-Finn by race, were converted to Judaism as a nation about 690 A.D. Can their descendants possibly claim any rights simply because the ancestors of their co-religionists had once settled in Palestine.

There is no indication that UNSCOP as a whole reacted to the Indian delegate’s demarche. But it was, in part, foreshadowed by the Palestinian Arab Higher Committee which “postulate[d] the ‘natural’ right of the Arab majority to remain in undisputed possession of the country, since they are and have been for many centuries in possession…”

The Arab Higher Committee also made two further arguments: first, that “the term ‘Arab’ is to be interpreted as connoting not only the invaders from the Arabian Peninsula in the seventh century, but also the indigenous population which intermarried with the invaders and acquired their speech, customs and modes of thought in becoming permanently Arabized.” It is the descendants of this mixed group, they said, who the current Palestinian “natives.” And, second, they claimed “acquired” rights, which derived from the various British promises during and immediately after the First World War.

Thus, the Palestinians “have persistently adhered to the position that the Mandate for Palestine, which incorporated the Balfour Declaration, is illegal.”

UNSCOP found the Arab claims weak. It held that the Palestinian claim to “natural” rights is flawed by the fact that “they have not been in possession of it [Palestine] as a sovereign nation…[and] Palestinian nationalism, as distinct from Arab nationalism, is itself a relatively new phenomenon.” Moreover, Great Britain “has consistently denied that Palestine was among the territories to which independence was pledged.” Finally, the Committee noted that the 1936 Royal Commission had pointed out that “there was a time when Arab statesmen were willing to consider giving Palestine to the Jews, provided that the rest of Arab Asia was free. That condition was not fulfilled then, but it is on the eve of fulfilment [sic] now.”

UNSCOP admitted that “the Jews would displace Arabs from the land if restrictions were not imposed…” [And found that since this] would seem inevitable…continued development of the Jewish National Home…envisages the possibility of a violent struggle with the Arabs.” It concluded by quoting Lord Balfour saying that “The general lines of [the Balfour Declaration] policy stand and must stand.”

So, UNSCOP recommended that following the British withdrawal, there should be a short interval during which time Palestine and the incipient Jewish state would be held under some sort of trusteeship while Palestine would be prepared to be partitioned into two states that would continue to be unified economically.
Meanwhile, the living circumstances of 250,000 or so displaced European Jews would be alleviated. The Committee ducked the question of whether or not that meant that the Displaced Persons would be allowed to enter Palestine. Finally, it noted that violence, carried out until recently “almost exclusively” by “underground Jewish organizations” would “render increasingly difficult the execution of the solution to be agreed upon by the United Nations.” But it offered no means to lessen the violence or to avoid the likelihood of war.

After reviewing the reports, listening to emotional appeals by various delegates, individuals and groups and following orders transmitted by their home governments, the delegates to the UN General Assembly voted (Resolution 181) on November 29, 1947, 33 to 13 with 10 abstentions, despite strong opposition by Arab member states, to recommend partition of Palestine.. The key feature was that it awarded the incipient Jewish state, whose citizens-to-be owned or controlled less than 6% of the land, 55% of the Mandate.

William R. Polk, MA (Oxford) PhD (Harvard) was teaching at Harvard when President Kennedy invited him to become a Member of the Policy Planning Council, responsible for North Africa, the Middle East and West Asia He served for 4 years under Presidents Kennedy and Johnson, During that time he was a member of the three-men Crisis Management Committee during the Cuban Missile Crisis and head of the interdepartmental task force that helped to end the Franco-Algerian war. Later he was Professor of History at the University of Chicago, founding director of the Middle Eastern Studies Center and Founder and President of the Adlai Stevenson Institute of International Affairs. At the request of Israeli Prime Minister Golda Meir, he negotiated with Egyptian President Gamal Abdul Nasser the cease fire that ended Israeli-Egyptian fighting on the Suez Canal in 1970. He was called back into the White House by the President’s special representative, McGeorge Bundy, as his strategic adviser to write a possible treaty of peace. (He has written three — abortive –peace treaties.) He is the author of some 17 books on world affairs, including Backdrop to Tragedy: The Struggle for Palestine; The United States and the Arab World; The Elusive Peace, the Middle East in the Twentieth Century; Understanding Iraq; Understanding Iran; Violent Politics: A History of Insurgency and Terrorism; Neighbors and Strangers: The Fundamentals of Foreign Affairs and numerous articles in Foreign Affairs, The Atlantic, Harpers, The Bulletin of the Atomic Scientists and Le Monde Diplomatique . He has lectured at many universities and at the Council on Foreign Relations, Chatham House, Sciences Po, the Soviet Academy of Sciences and has appeared frequently on NPR, the BBC, CBS and other networks. His most recent books, available on Amazon, are Distant Thunder: Reflections on the Dangers of Our Times and Humpty Dumpty: The Fate of Regime Change.