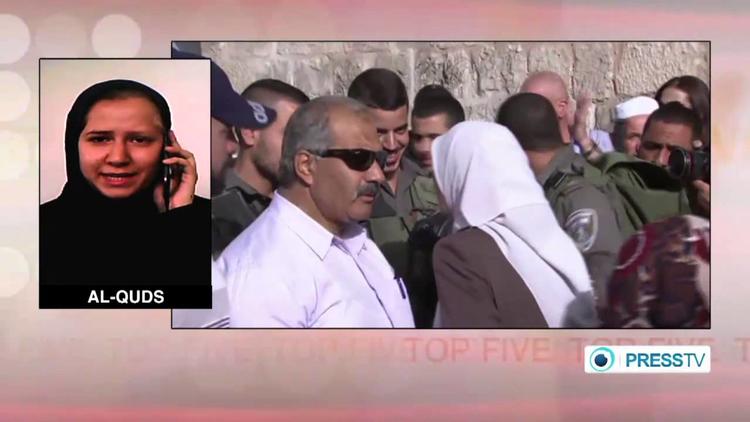 JERUSALEM (Ma’an) — Hundreds of Palestinian Muslim worshipers were allowed to access the Al-Aqsa mosque compound in the Old City of Jerusalem on Wednesday at noon after being prevented from entering the Muslim holy site the day before and in the morning.

Director of the Al-Aqsa Mosque, sheikh Omar al-Kiswani, told Ma’an that Israeli police reopened some of the gates of the compound, allowing Palestinian worshipers of all ages to enter the compound.

The change in the Israeli authorities’ policy followed heavy clashes with security forces in the morning that left 15 Palestinians injured by rubber bullets and shrapnel from stun grenades.

Israeli police spokesman Micky Rosenfeld said on Twitter that five police officers were also wounded, while three Palestinians were detained in the clashes.

Palestinians were protesting not only the fact that they were barred from the compound, but also the presence of Israeli housing minister Uri Ariel, a right-wing extremist who has called for the destruction of the Al-Aqsa Mosque and Dome of the Rock and the construction of a Jewish temple in their place.

Sheikh al-Kiswani said that during clashes earlier on Wednesday, Israeli troops smashed some of the Al-Aqsa Mosque’s windows and doors and fired hundreds of stun grenades and tear gas canisters inside the mosque.

Israeli officers, he added, attacked dozens of worshipers with pepper spray as well.

The ban on Muslim worship inside the Temple Mount was reportedly imposed on Tuesday morning at dawn ahead of the holiday of Rosh Hashanah, which celebrates the Jewish New Year.

Because of the sensitive nature of the Al-Aqsa compound, however, Israel maintains a compromise with the Islamic trust that controls it to not allow non-Muslim prayers in the area.

The compound, which sits just above the Western Wall plaza, houses both the Dome of the Rock and Al-Aqsa mosque and is the third holiest site in Islam.

It is also venerated as Judaism’s most holy place as it sits above the site where Jews believe the First and Second Temples once stood.

Al-Aqsa is located in East Jerusalem, a part of the internationally recognized Palestinian territories that have been occupied by the Israeli military since 1967.