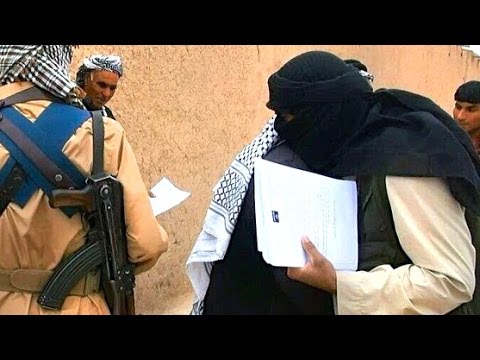 All Mosul women must now wear either black or white niqab.

A young Mosul man tells NIQASH how his social life, and the lives of others his age, has been cruelly interrupted by the fact that Sunni Muslim extremists now control their city. The young man says he was set to marry his sweetheart upon graduation – however now that all women must be fully veiled and universities are closed, he can neither meet her, nor finish his studies.

Baha is a young man in Mosul, whose full name cannot be disclosed here. He is one among many young people in the city, now under the control of Sunni Muslim extremists, whose social lives have been severely curtailed by the group known as Islamic State, or IS.

Of course, Mosul has always been a conservative city with its culture deeply rooted in tribal tradition. So young people in Mosul were never able to socialise freely anyway, or easily fall in love with anyone they wished to. However things are even more restricted under the IS group, or Daash, as it is known locally – Daash is the acronym for the group in Arabic.

Baha had fallen in love with a young Mosul woman called Maysoun. He was in his fourth year at university and studying to be an engineer. He had already asked Maysoun’s father for permission to marry his daughter once but her father had refused him because, as he said, Baha was still a student and living off his parent’s income.

However Baha felt sure that as soon as he graduated and got a good job as an engineer, Maysoun’s father would change his mind.

However when Daash was able to take control of Mosul in early June this year, the love story between Baha and Maysoun had to be put on hold.

It was always fairly unusual to see a young man and young woman together here. Mosul’s society was a fairly closed one. And there were not really many places that young couples could go to meet. Mosul’s tribal traditions and years of insecurity after 2003 didn’t help either. But the need to love and be loved caused many local youth to improvise; they would invent ways to see one another and communicate, even if it was just for a few minutes in a market place, on a Facebook page or via a text message on a phone.

But many of these things were made even more difficult by Daash’s arrival.

For one thing, Baha’s studies were curtailed when the extremist group closed the local university and other government institutions. For another, this was the only place where Baha and Maysoun could actually see one another, even if at a distance.

This is not Baha’s only problem either. “Daash has forced all local women to wear the niqab,” he says angrily; the niqab covers almost the whole face, leaving only the eyes visible. “So I wouldn’t be able to recognize Maysoun, even if she was walking right next to me.”

The couple had previously contacted each other using text messages on their mobile phones and via Facebook. But when Daash first came to the city, mobile services and the Internet were cut off for some time. These services are now up and running again but Maysoun still has not replied to any of Baha’s lovelorn messages.

“But I haven’t seen any women in white veils leave the house,” Baha notes. Perhaps Maysoun never left the house, he adds. Then he pauses. “I don’t know what the penalty might be for girls who refuse to marry a member of Daash,” he says. “But it couldn’t be less than a flogging.”

Baha is well aware of what happens to those who practise any “unlicensed” acts of love in the new, self-declared Caliphate that Daash are running. Several days ago, two men were stoned to death for adultery. This was even though everyone knows that under Islamic law, there have to four witnesses to the actual act of adultery before such a punishment can be meted out. Obviously this is practically impossible.

Baha believes that the punishment by stoning was just supposed to show off Daash’s power. He can’t rule out the possibility that the victims who died were in love, just like he is. They just had bad luck and fell into the hands of Daash, who enslave their prisoners, behead people and punish ordinary people just for smoking or for saying the wrong thing.

Baha is well aware of all this and so to try and communicate with Maysoun, he created another page under a different name on Facebook. For over two months, he has written of his love and longing and he waited for Maysoun to confirm his friendship request.

But he has waited in vain. Instead of getting a message from her, he received a letter decorated with Daash’s distinctive black flag, that suggested he pledge allegiance to Daash’s leader, the Caliph, because this was his only way to true salvation.