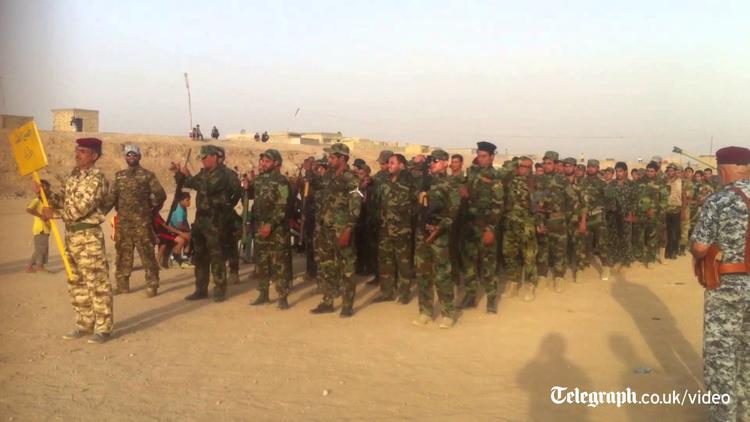 The pan-Arab, London-based daily, “Al-Sharq al-Awsat” (The Middle East) reports that the major Shiite militias of Iraq are denouncing Prime Minister Haydar al-Abadi for welcoming US air support in the fight against the so-called Islamic State of Iraq and the Levant (ISIL).

Prime Minister al-Abadi himself rejected conventional US ground troops for Iraq on Wednesday, even as Gen. Dempsey said that they might ultimately be necessary. The militias are going further, saying Yankees go Home altogether.

Hamza Mustafa reports from Baghdad that Hadi al-Amiri, head of the Iran-backed Badr Corps, warned that the American plan is to take credit for the victories of the Iraqi armed forces and the popular militias. He called for a rejection of the plan and dependence solely on Iraqi military and paramilitary to defeat ISIL. The Badr Brigades are the paramilitary arm of the Islamic Supreme Council of Iraq (ISCI), led by Shiite cleric Sayyid Ammar al-Hakim. Al-Hakim condemned the exclusion of Iran from the international coalition opposing ISIL. The new foreign minister, Ibrahim al-Jafari also objected to the exclusion of Iran . His party, the National Reform Trend, is close to al-Sadr.

The Bloc of the Free (al-Ahrar) led by Shiite cleric Sayyid Muqtada al-Sadr called on al-Abadi to reject the US plan. Muqtada al-Sadr warned the US against trying to reoccupy Iraq and threatened, “If you return, we will return.” This was a reference to his Mahdi Army, which had subsided in importance after the US withdrawal. Muqtada boasted that the militia had inflicted heavy casualties on US troops and forced the US out. He also said that if the Mahdi Army “Peace Brigades” discovered an American presence in any province where they were fighting ISIL, they should immediately withdraw from the fight. (For the US Air Force to give close air support to Iraqi troops, there have to be US Special Operations forces on the ground to paint lasers on the targets and to coordinate with the Iraqi Army).

The Shiite militias appear to have been key to the breaking of the siege of Amerli, where ISIL had planned to massacre the 20,000 Turkmen Shiites living there. The US did give close air support to them and the Iraqi Army, which they didn’t seem to mind at the time. But now they are all rejecting any US involvement. It is not clear that the Iraqi Army, which suffers from low morale, bad training and corruption, can do the job against ISIL by itself, without the aid of the militias.

Al-Sharq al-Awsat reports an anonymous Iraqi politician as saying that former prime minister Nouri al-Maliki made a mistake when he continued to rely on the militias and did not take advantage of the fatwa/ religious legal ruling of Grand Ayatollah Ali Sistani in favor of the regular Iraqi Army to build it up and take recruits away from the militias.

It is difficult to tell how serious these militia leaders’ pronouncements are, since they might be attempting to save face with their followers even as they benefit from the US air cover. On the other hand, Asa’ib Ahl al-Haqq actually did in the past kidnap US troops, and the Mahdi Army fought them tooth and nail in spring of 2004, inflicting high casualties on them. Since President Obama’s air campaign requires Special Ops forces like Navy Seals or Green Berets to be on the ground with the Iraqi Army, they should apparently watch their backs. The people they are trying to help against ISIL don’t seem to appreciate their being there. And many of them seem to prefer Iran’s help.

from a couple of months ago: The Telegraph: “Iraq Shia militias mobilise in face of threat from Sunni-led jihadists ”