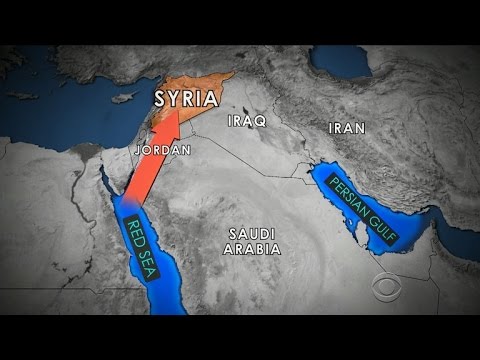 The London pan-Arab daily “Hayat” [Life] reports this morning on the air strikes conducted on ISIL positions in Raqqah, Syria, by the United States and several Arab allies.

The Syrian government acknowledged that the US gave fair warning it would bomb Raqqah to the Syrian ambassador to the UN. That is, the US may not militarily be coordinating with Syria, but it does inform the regime of enough information to avoid a shoot-down.

Not only ISIL positions but also some targets of the Jabhat al-Nusra or Succor Front (the al-Qaeda affiliate in Syria) were struck by the US and its allies. Once you enter a war, it doesn’t stay limited.

The US deployed not only fighter jets but also drone strikes and Tomahawk missiles, presumably fired from a destroyer from the Sixth Fleet in the Mediterranean. It targeted suspected arms depots, the mayor’s mansion (used by ISIL as its HQ in Raqqah), and checkpoints, among other things. Dozens of ISIL fighters were said to be killed and more wounded.

Saudi Arabia, Jordan and UAE all taking part alongside US in air strikes tonight against #ISIS in #Syria No European nations

Apparently “backed by” does not mean “joined in the bombing” in the cases of Bahrain and Qatar. Qatar may have flown escort, but word is that it didn’t actually drop bombs.

Some 80% of Raqqah’s 240,000 inhabitants, i.e. about 190,000 people, are said to have remained after ISIL took over the city, despite its harsh and arbitrary rule. It is inevitable that US and allied bombing on important Raqqah military targets will kill a certain number of civilians. That is, Raqqah is roughly the size of Grand Rapids, Michigan or Salt Lake City, Utah. Imagine if fighter-jets were dropping bombs on targets within those small cities?

The some 22 sorties flown on Monday will have killed some ISIL terrorists, blown up some weapons warehouses, and destroyed some checkpoints. But ISIL are guerrillas, and they will just fade away into Raqqah’s back alleys. The US belief in air power is touching, but in fact no conflict has ever been quickly brought to an end where US planes have been involved.

The ISIL guerrillas will fade away, perhaps inside the city, where you can’t bomb them without killing a lot of civilians (and they will video the victims for you). Then there will just be occasional drone strikes of the sort that were relatively ineffectual in Afghanistan and FATA in Pakistan.

The US dropped enormous numbers of bombs on Iraq since 2003, and in the end its sponsored government lost 40% of the country to ISIL. Bombing positions in Syria in the absence of an allied ground force is highly unlikely to be decisive in and of itself.