Bravo to Ben Affleck and Nicholas Kristoff for telling Bill Maher off about his chronic case of Muslim-hating bigotry. (He would say he doesn’t hate Muslims, only their religion, but then those who hate gays say much the same sort of thing).

Maher and Sam Harris like to demonize Islam and by association Muslims. Ben Affleck de-demonized them by appealing to the banalities of everyday life. Most Muslims, he said, just want to have a sandwich and get through their lives. This is true.

Addressing the arguments of Maher and Harris is like nailing jello to the wall. They shift between cultural practices that are now objectionable in the US (but some of which were common here until recently) and an assertion that Muslims are unusually violent. But this latter is not true. As for Islamic law, it clearly forbids terrorism.

See Terrorism and the Other Religions

Maher’s and Harris’s charges against Muslims in general are ridiculous. Neither one has ever lived in a Muslim-majority society or knows the languages or cultures. They just retail invidious calumnies second-hand. Almost anything polemicists like Sam Harris say of Muslims can be said of others; i.e. they are just describing the human condition, unfortunate as it often is. In the 1990s an ABC poll showed that 10% of Americans sympathized with far right wing white supremacist groups like the Michigan Militia. My recollection is that polling showed that a significant proportion of Chinese sympathized with the 9/11 attacks and to this day only a third think al-Qaeda committed them (i.e. it wasn’t viewed as a fundamentalist act but as an anti-imperialist one [this point of view is execrable; I’m just reporting it]). Note that in this last instance, the attitudes have nothing to do with religion but rather with nationalism/ imperialism, a binary pair that explains the world much better than religion/atheism. The same statistics, if glibly given by Maher or Harris for Muslims, would damn the latter and their tradition; but what about the Chinese? Is Communist-Capitalism or the Confucianist heritage to blame here?

The dispute decided me to reprint my essay on Maher and Muslims from a couple of years ago, below:

Comedian Bill Maher puts himself in the company of “9/11 liberals” who believe that Islam as a religion is different and decidedly worse than all other religions. He said Friday that ‘at least half of all Muslims believe it is all right to kill someone who insults ‘the Prophet.’ His bad faith is immediately apparent in the reference to 9/11, not the work of mainstream Muslims but of a political cult whose members often spent their time in strip clubs.

Now, it may be objected that Maher has made a career of attacking all religions, and promoting irreverence toward them. So Islam is just one more target for him. But that tack wouldn’t entirely be true. He explicitly singles Islam out as more, much more homocidal than the other religions. He is personally unpleasant to his Muslim guests, such as Keith Ellison. His reaction to the youth of the Arab Spring gathering to try to overthrow their American-backed dictators was “the Arabs are revolting.” Try substituting “Jews” to see how objectionable that is.

Maher ironically has de facto joined an Islamophobic network that is funded by the Mellon Scaife Foundation and other philanthropies tied to the American Enterprise Institute, etc. which is mainly made up of evangelical Christians, bigoted American Jews who would vote for the Likud Party if they could, and cynical Republican businessmen and politicians casting about for something with which to frighten working class Americans into voting for them.

Maher is a consistent liberal and donated $1 million to the Obama campaign, so he is in odd company in targeting Muslims this way. So what explains this animus against Muslims in particular? The only thing he has in common with the Islamophobic Right is his somewhat bloodthirsty form of militant Zionism. He strongly supported the Israeli attack on helpless little Lebanon in 2006, in which the Israelis dropped a million cluster bombs on the farms of the south of that country. He talks about how the besieged Palestinians of Gaza deserve to be “nuked.” His interviews with Likudnik Israeli officials are typically fawning, unlike his combative style with other right wing guests.

In short, Maher is in part reacting as a nationalist to Muslims as a rival national group, and his palpable hatred for them is rooted not in religion but in national self-conception. It is a key tactic of militant Zionism to attempt to demonize and delegitimize Muslims; you don’t have to apologize for colonizing or imposing Apartheid on Palestinians, after all, if they aren’t really human beings. In addition, like many Americans, Maher sees the United States, Europe and Israel as ‘the West’ locked in a rivalry with an alien, Islamic civilization that is intrinsically fanatical and backward (his fellow-traveller on this issue, Pamela Geller, uses the word ‘savage.’) Maher is aware of the history of Christian bloodthirstiness, of course, but he often speaks of it as being in the past. He seems to see contemporary Muslims as having the same sorts of flaws (Inquisition, Crusades) as medieval Christianity.

Maher is not important, but his thesis is widely put forward, and it matters in real people’s lives. There is a nation-wide campaign by religious bigots (most of them sadly evangelical Christians) to prevent American Muslims from building mosques in their communities, and one of the reasons often given is ‘fear’ that the Muslims are homicidal and so the mosque is a conspiracy to commit murder waiting to happen. Maher’s singling out of Muslim as different willy-nilly encourages people to treat them as different, i.e., to discriminate against them.

It is significant that Maher tries to pin the label ‘murderer’ on the Muslims (or half of them?) Because one of the centerpieces of classical Western hatred of Jews was the blood libel, the allegation that they stole the babies of Christians and sacrificed them in secret rituals. It is hard to see what the difference is between that and arguing that some 3 million American Muslims are walking around like a grenade with the pin pulled out. Both blood libels configure a non-Christian group as homicidal, and locate the impulse for their alleged killing sprees in secret religious beliefs opaque to the normal Christian.

Refuting Maher would be tedious and, as others have noted, like nailing jello to the wall, since he doesn’t have a cogent set of testable theses about Muslims, he just despises them. For what it is worth, It is fairly easy to show that Maher’s specific assertions about Muslims, and more especially about American Muslims, are simply not true. Most reject militant groups, and nearly 80% want a two-state solution on Israel and Palestine, i.e. they accept Israel assuming Palestinian statelessness is ended.

Crowd politics is different in various parts of the world and it is certainly true that riots can be provoked in each culture by different things. It is a straw man to say Muslims “would” kill people for insulting Muhammad. How many such killings happen each year? where? And it stacks the deck against them to single out their motive from other possible impetuses to violence. Is the complaint that they are more violent than other people (not in evidence)? Or that their motives for violence are peculiar (depends on how you classify them)? In the United States, the police beating of Rodney King resulted in 3000 shops being burned down in Los Angeles. Race seems to be the thing that sets off riots in the US. Rioting over race relations is so common that major such incidents, as in Cincinnati, often do not even get national press.

The touchiness of Muslims about assaults on the Prophet Muhammad is in part rooted in centuries of Western colonialism and neo-colonialism during which their religion was routinely denounced as barbaric by the people ruling and lording it over them. That is, defending the Prophet and defending the post-colonial nation are for the most part indistinguishable, and being touchy over slights to national identity (and yes, Muslimness is a kind of national identity in today’s world) is hardly confined to Muslims.

In India, dozens of Christians have sometimes been killed by rioting Hindus angry over allegations of missionary work. Killing people because you think they tried to convert members of your religion to another religion? Isn’t it because such a conversion is an insult to your gods?

In Myanmar, angry Buddhists have attacked the hapless Muslim minority, sometimes alleging they were avenging an instance of the rape of a Buddhist girl (i.e. these are like lynchings in the Jim Crow South).

Or then there have been Sri Lanka Buddhist attacks on Tamil Christians. In fact, Sri Lanka Buddhists have erected a nasty police state and shown a propensity for violence against the Tamil minority, some elements of which have had revolutionary or separatist aspirations (not everybody in the group deserves to be punished for that).

And, militant Israeli Jews have set fire to Muslim mosques in Palestine and recently tried to “lynch” three Palestinians in Jerusalem. If Maher thinks only Muslims are thin-skinned, he should try publicly criticizing Israeli policy in America and see what happens to him.

Since Iraq didn’t have ‘weapons of mass destruction’ and wasn’t connected to 9/11, it is hard to avoid the conclusion that 300 million Americans brutally attacked and militarily occupied that country for 8 1/2 years, resulting in the deaths of perhaps hundreds of thousands of Iraqis, the wounding of millions, and the displacement of millions more, mainly because Iraq’s leader had talked dirty about America. Now that is touchy.

Americans tut-tutting over riots in the Arab world appear to have led sheltered lives. In most of the world, crowd actions are common over all kinds of issues, beyond the ones of race, class and college sports teams that routinely provoke them here. When I was living in India there were always items in the newspaper about a bus driver accidentally running over a pedestrian, and then an angry mob forming that killed the bus driver. Neighborhood nationalism. The same sort of crowds gather when a blaspheming author drives his discourse into the sanctity of their neighborhood. It is appalling, but I’m not sure what exactly you would do about that sort of thing. It certainly isn’t confined to Muslims…

Maher is using his position as a comedic gadfly to promote hatred of one-sixth of humankind, and that is wrong, any way you look at it. 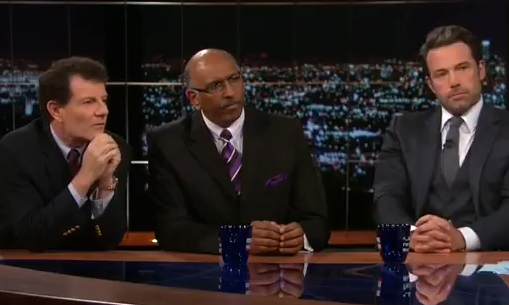