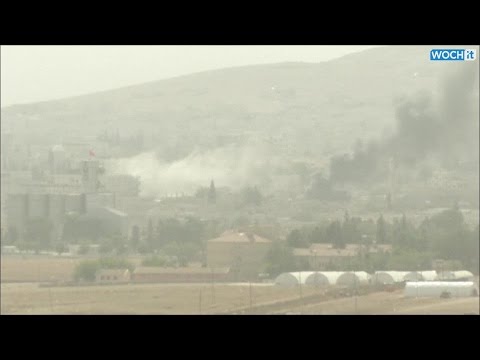 Following international media reporting, it is easy to think about war only in terms of uniforms, boots and steel. But the war against the Islamic state has a different face in Iraq. Contrary to the popular game where scissor beats paper, paper will be the biggest threat to the steel of scissors of both Iraqi and Kurdish defenses. Money is scarce. And the longer this dry period continues, the more it will become the first piece of domino to fall and set a landmine in motion.

Since the beginning of this year, Baghdad has not paid the Kurdistan region the constitutionally fixed 17% of the federal budget due to a dispute over arguably vague regulations on oil sales in the same constitution and the Kurdistan Regional Government (KRG) stretching its definition of these terms by establishing final realities on the ground. I am referring to the transformation of an already existing oil smuggling route to Turkey into a solely Kurdistan pipeline to Turkey without Baghdad’s approval.

Since this first financial freeze, the Kurdish regional government has been using up its reserves and has so far not been able to pay employees for four month. In a country where an estimated 60-70% are employed by the public sector, that is a problem. Yet, it seems that Iraq’s non-existing banking system comes with an advantage in this situation. As people get paid in cash, people tend to stack the cash up out of habit. Plus, being used to a more flexible interpretation of the phrase ‘being paid by the end of the month’, people have prepared for the worst case already ahead of time – in the old fashioned way by literally saving money in the mattresses and buying women gold jewelry as a last resort investment. And now the mattresses are becoming thinner and gold is being sold again on the markets but the discussions with Baghdad are still ongoing and in the meantime there is no money flowing. The really bad news on top of it is that there seems to be no end to the debates in sight. Not even the official deadline to the negotiations seems to have any relevance in these disputes. Instead, the whole scene resembles more of a poker game to test how far the nerves of the partner can be stretched by bluffing until the first chicken budges rather than it being about finding actual solutions.

In the meantime, the Kurdish region is literally draining money. As I hear, even big companies can get only 10.000 dollar a day from the few banks around, western unions and other money wiring institutions are closed more often than not, and in order to buy internationally cash has to be sent to turkey by carrier to be banked from there. Outside of businesses it gets even more irritating: there is no money for electricity, for water, for rent, for food, for nothing – and yet, fascinatingly enough, things still seem to work. But the appearance of normality is just a cover to the ticking time bomb that actually lies beneath it.
And winter is coming.

In a position like that, I guess it is actually lucky that most fighters on the Kurdish front lines are not professional soldiers: they are not there for the money or career but out of belief to risk their lives for the defense of their nation and the glory of their family. Because, if they were soldiers of profession and actually working on payment alone, the Islamic state would have an easy walk into the rest of Iraq with a smile on their face and some checks in their hand.

A cold wind from the west
The conflict has recently been praised for accomplishing something that a hundred years of national struggle was not able to do: to put the Kurdish issue to international attention. However, there is a side effect that comes with this cure. The attention to the Kurdish area made ‘Kurdistan’ more a part of Iraq than before – at least in the security considerations. While always a part of Iraq officially, the fighting argument for any international business to work in the KRG even as Iraq was unstable was that ‘this is Kurdistan, not Iraq’. And Kurdistan is different! They have different visa laws and regulations in combination with a relatively secular population, a relatively connected infrastructure, and a relatively functioning system of ‘how to do’ bureaucracy and business – at least relative to the rest Iraq. And they also have a significantly higher level of security than the rest of Iraq. But now, with all the attention – and the additional attention, and obvious confusion, of international observers by hearing and talking about Kurds in Iraq and Kurds in Syria and Kurds in turkey only adds to a less refined understanding of their differences and to a more general suspicion against all of it. I have even seen maps circulating where cities in Iraq and Syria where confused as to which belongs where – a sign to having reached a last station of confusion to the issue that is split between at least three countries, six Kurdish parties, and four Kurdish regions.
But more than just confusing people, the increased attention has lead to a higher security alert for anything relating to the word ‘Kurd’, no matter whether it ends in -is tan or -is. And this higher level of security in turn leads to less foreign companies retiring and hence even less money coming into the country, enforcing the already existing cold breeze by a freezing wind from the west.

And winter is coming.
More than holding up as a metaphor for the financial deadlock in Iraq and the Kurdish region, winter is also a hard truth that will soon hit the region and trigger another ticking bomb: the humanitarian situation. Around 20% of the KRG population is refugees. They come from Syria, from Mosul, from sinjar. Some have been in the KRG for two or three years, others have just arrived. And people are still pouring in. the local Kurdish population is very receptive to the refugees as most of them have been refugees themselves during the times of saddam Hussein. But what started as a warm welcome has turned into a minimal acceptance now. Due to refugees hiding out in local schools, hundreds of children have been suspended from school. What sounds like every student’s dream is a disaster in a country that is not particularly known for its good education. Not only is a bigger portion of the population less literate, the teachers do not have a job either. With the teachers not being paid, an entire area of consumers falls from the market, which triggers other people to lose their jobs on that effect and so forth. And that comes in addition to the streets being filled with begging and mourning people.

A friend of mine recently said that the best solution to the problem is for people to go home. What sounds like a radical statement at first is probably the only true solution to the issue. Winters in the mountains are cold and wet. The houses and tents refugees live in hardly have walls around them. Many people will get ill and there is neither money nor doctors to treat them. And all the international help for the refugees is creating is a resentment from the local population for them being overlooked entirely in the process. Therefore, coming back to my friend, being able to send a large portion of the refugees back to their homes, will take a huge load off likely misery and potential tension from the situation and hence could be the way to defuse the bomb. Unfortunately, people cannot return home until a trustworthy security and stability returns in at least Sinjar, Mosul and Kobane. With the limited capacities in the region, however, it is likely that winter will hit the region before the international training of local Kurdistan paramilitary, the Peshmerga, will ever yield the fruits necessary to establish and hold the security for people to return to their homes. Instead, the fruits will have to wait until spring.

So, dear reader, if you want to hear it or not, I am afraid, the worst is yet to come. Let’s hope for a mild winter.