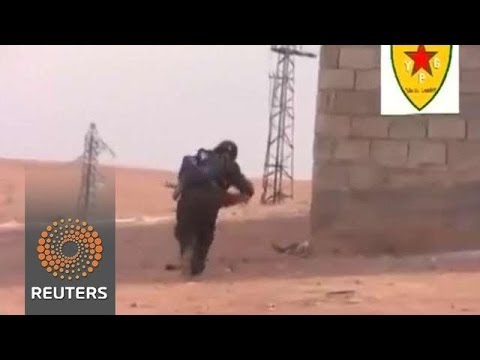 Ismat Sheikh, commander of the Kurdish forces at the border town of Kobane (Ain al-Arab) that is besieged by ISIL tanks and artillery, says that he expects massacres of its inhabitants if it falls to the Sunni Arab extremists.

He warned that ISIL fighters are less than a mile from his front line.

Despite US air strikes, ISIL has drawn up some 25 tanks and a number of artillery pieces to pound Kobane repeatedly.

There was also heavy close-quarter fighting in the east and the south of the town between Kurdish guerrillas and ISIL units on Friday.

Last week over 60,000 Kurds were forced to flee to Turkey as ISIL advanced into the Kurdish region of Syria.

Most Syrians speak Arabic, but the Kurdish minority speaks a language akin to Persian.

The Kurds at Kobane have called upon armed Kurds everywhere to come defend the town, warning of a massacre.

Although Turkish Prime Minister Ahmet Davutoglu pledged not to allow Kobane to fall, he later backtracked, saying that Turkey has few options for intervening directly in Syria.
—–