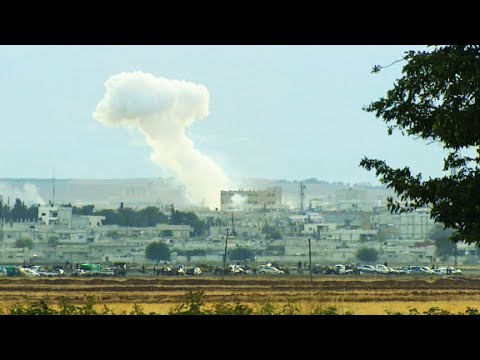 Senior members of the Sunni Muslim extremist group, the Islamic State, have disappeared from Mosul and Tikrit. Sources suggest they defected for a number of reasons: they fear the end is nigh for their group, the threat posed by unhappy former allies who have already assassinated some of their number and because of promises of money and safety.

Last week was a tough week for the Sunni Muslim extremist group known as the Islamic State, or IS. It had incurred serious losses of manpower in strongholds in both Syria and Iraq.

Figures released by the Iraqi Ministries of Defence and the Interior suggest that the IS group lost around 400 fighters in Iraq and reports from Syria say as many as 500 IS fighters have been killed there, particularly around Kobani where there is fierce fighting but also in strongholds like Raqqa, where airstrikes by an international coalition are having an impact.

And it seems that some of the leaders in the IS group now feel that the writing is on the wall and that the IS group won’t be able to hold onto power for much longer.

Confidential information from inside Iraq military intelligence obtained by NIQASH says that several senior leaders in the IS group have disappeared from areas the group controls – most particularly from inside Mosul, the northern city the group considers it’s Iraqi capital, and from parts of the Salahaddin province.

NIQASH’s source inside Iraqi intelligence says that most of the IS group leaders who disappeared are field commanders, men responsible for administration of combatants and territorial sectors. Most of them are Iraqis too – they are not from among the IS group’s Arab or foreign fighters. And apparently the group of defectors also includes one Ali al-Hamadani, who is thought to be very close to the group’s leader Abu Bakr al-Baghdadi, as well as another senior leader whose name is unknown as yet but who was allegedly responsible for al-Baghdadi’s personal protection.

Asked as to why these senior members may have defected, the source told NIQASH that it was down to the success of local and foreign infiltration into the organisation. The senior members had been promised money and protection, their future safety guaranteed if they left the IS group and gave up information about the group’s plans and movements.

It is also thought that the senior leaders are leaving because they fear that the IS group will not last much longer in Iraq and that they might eventually be killed. If they are caught though, they will also be killed as the sentence for betraying the organisation, as decreed by its leader, al-Baghdadi, is also death.

There has also been a rumour that al-Baghdadi had been moving a large amount of money around, smuggling it out of Iraq and investing it with friendly businessmen in the Gulf States in order to ensure that the IS group has financial stability – in case, one imagines, they lose the money-making territory they currently control.

After rumours about the defection of these senior leaders began to circulate, the IS group held one of their traditional demonstrations of strength and power, organising a parade of vehicles and manpower through Mosul’s streets.

Locals say that other senior members of the IS group –including the group’s spokesperson, Abu Mohammed al-Adnani, the IS-appointed governor of Mosul, Abu Bakr al-Khatouni, and the group’s military leader in Tal Afar, Abu Ala al-Afri – all returned from Syria to take over the posts left empty by the deserters.

After the IS group’s military parade ended, there was a wave of arrests in Mosul, during which many of the former police and military men still living in the city, who had repented for their past jobs, were taken away. They are apparently now being held in former government buildings that the IS group uses as prisons there.

One of the other reasons for the defections are the ongoing threats presented by armed groups inside Mosul, says Zakaria al-Hattab, who leads one of the anti-IS group militias working inside the city. There have been a number of IS members assassinated by unknown assailants in the city.

“Armed factions in Mosul are not yet able to confront the IS group openly,” says al-Hattab, who is currently in Erbil in the semi-autonomous region of Iraqi Kurdistan. But, al-Hattab, adds, he and a group of others are forming militias to try and do exactly that.

The majority of the IS leaders responsible for Mosul’s security and services are Iraqis and possibly also longer-term residents of the city. “Everybody knows them and everybody hates them,” al-Hattab explained to NIQASH. “And the tribal leaders in Mosul who are against the IS group have already made threats against the group’s senior members, saying they will chase them out of the city and kill them once IS is defeated. That’s what has scared these men and they’ve decided to leave before it’s too late.”

“The IS group leaders who defected left because they realized that the whole world was waging war against them,” suggests Rashid al-Samarrai, a local security expert. “They also know that the international coalition is going to benefit hugely from information they’re gleaning on the IS group’s plans and its hiding places.”

Additionally, al-Samarrai says, a lot of the most recent recruits to the IS group in Iraq are locals and former members of Saddam Hussein’s army and intelligence services. Many of them undertook religious training only after, or shortly before, they joined the IS group.

“Senior leaders in the IS group are military personnel who have been trained in warfare,” al-Samarrai says. “They only embraced radical religious thinking a few years ago and their belief in this system is actually fairly weak when compared to the core membership of the IS group, who have embraced radical religious ideas since they were young. The latter group would find it much harder to betray the organisation because they truly believe in it.”