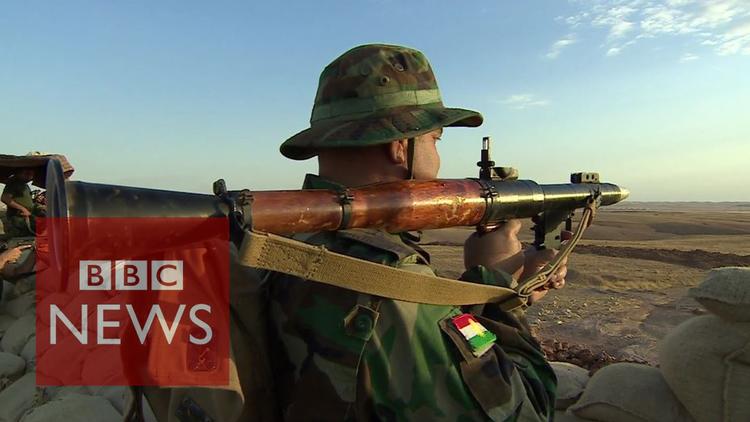 In an interview with Samira Ali Mandee of RFE/RL’s Radio Free Iraq, General Jabbar Yawar, secretary-general of the Peshmerga Ministry of Iraq’s Kurdish region, discusses the ongoing fight against Islamic State militants, cooperation with Iraqi and outside militaries, and the mood on the front.

RFE/RL: Could you tell us about the security developments along the front line between your Peshmerga forces and Islamic State (IS) militants?

General Jabbar Yawar: The line is about 1,050 kilometers long, with ongoing gunfire and clashes along its entire length. We have recently made advances on the ground, particularly after the support we got from U.S. warplanes and more recently British and French warplanes, as well as the aid we have received from the U.S.-led coalition that now has German, French, Australian, and Canadian officers in [Iraqi] Kurdistan.

Yawar: We have plans for the liberation of all Kurdistani territory that falls into the hands of the terrorist groups. Rabee’a is an important crossing on the Syrian border and it will influence the outcome of military operations in the area. And it will help us in the quick deployment [of our troops] into the other areas of Kurdistan, over the length of the 1,050-kilometer front line.

RFE/RL: In addition to the air cover provided by the international coalition for the Peshmerga forces in their confrontation with IS gunmen, what kind of support are you getting from the coalition’s military experts?

Yawar: It is varied. We are coordinating with these officers. We will have coordination between the coalition’s air forces and the forces on the ground.

RFE/RL: How many Western military experts are there?

Yawar: It varies. Some countries have 10, 20, 50 experts, but the largest contingent is American. There are about 1,800 U.S. experts in Iraq, with some of them in Kurdistan. They provide their operational fighting expertise and provide a variety of training to the Peshmerga forces. They also help us in deploying weapons and munitions to the Peshmerga.
Kurdish Peshmerga forces clash with Islamic State militants in the town of Daquq, south of Kirkuk, on September 30.

RFE/RL: What about your coordination with the Iraqi Army? Did the army take part in liberating Rabee’a and the other areas that have been liberated?

Yawar: No, they did not take part in the Rabee’a operation, but in some cases they participated with their helicopter forces and the Iraqi Air Force. Before that, they took part — about 100 of them — in the Mosul Dam operation and took part with the Peshmerga in the Sulaiman Bek operation and in clearing the highway between Kirkuk and Baghdad. Up to now, their participation has been limited because there are no Iraqi forces in nearby regions such as Mosul or Salahuddin.

RFE/RL: What about the participation of armed Kurds from Iran or Turkey in your fight against IS militants?

Yawar: When the terrorists began their attacks on Kurdistan, all the Kurdish fighters from Iran, Turkey, and even Syria stood alongside us in Sinjar, Mosul, around Kirkuk and other areas, helping their Peshmerga brethren.

RFE/RL: There have been calls for help from the Syrian border town of Kobani, which is now besieged by ISIL gunmen. Are there any plans to help the Kobani Kurds?

Yawar: We are ready to provide help, but the problem is that Kobani is geographically separated from the other cantons. It is about 70 kilometers into areas that are in the hands of the terrorists, including some Arab villages. It is difficult for infantry forces to reach them, but we have been told by the United States and the coalition that they will help our Kobani brethren by striking the terrorists’ positions, and coalition warplanes have indeed attacked those positions around Kobani and Raqa.

RFE/RL: As a military expert, do you believe that coalition air strikes are enough to stop the IS militants’ advance and to liberate Mosul and the other regions in Diyala and Anbar?

Yawar: [The air strikes] help the Peshmerga in stopping the terrorist attacks and in supporting Peshmerga attacks on the terrorists’ positions, but they will not be enough for the future liberation of all the Mosul, Salahuddin, Anbar, and Diyala areas. Larger forces will be needed on the ground, whether they be federal government forces in coordination with the U.S. and coalition air forces, together with Peshmerga forces, or through the presence of ground forces from those countries.

In the future, we will need forces on the ground. The areas controlled by the terrorists are large.

RFE/RL: Then you support the participation of coalition ground forces to support the Iraqi forces and those of the Peshmerga?

RFE/RL: The Iraqi government has reportedly not paid the salaries of employees in Kurdistan. What about the salaries of Peshmerga who have been fighting against IS militants for months? Are they being paid by Baghdad?

Yawar: The Kurdistan government pays the Peshmerga salaries. It pays for everything, including the cost of military operations and all the equipment and materiel.

RFE/RL: Are you satisfied with your armaments? There have been calls by the Kurdish government to arm the Peshmerga in order to enable it to confront and stop IS attacks. How do you feel about what you have received so far from Western countries?

Yawar: What has been provided has enabled the Peshmerga forces to confront the terrorist attacks and to attack their positions. We thank all those countries for what they have provided to the Peshmerga Ministry, but we still need more.

What we have received are standard weapons, and we require new weapons to defeat the terrorists and to liberate the areas they have captured in the region.