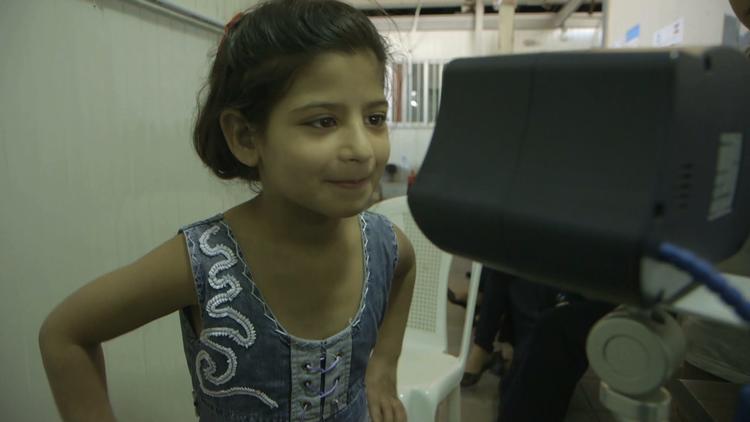 I was scrambling to take notes when the First Lieutenant of the Jordanian Security Forces joined my conversation with security personnel in one of the small offices of Ruba’a al-Sarhan. “No other country would do this for Syria’s civilians,” he declared. Located close to the Syrian border in the al-Mafraq governate, Ruba’a al-Sarhan is the Joint Registration Center run by the UNHCR and Jordanian Security. It is also the only official registration center for Syrians entering Jordan, though several informal reception posts (precarious tin constructions) dot the hilly border and make the journey for Syrians a bit shorter. It is the one place all Syrians must visit, where officials decide who gets to stay (onto al-Za’tari or al-Azraq camps) and who gets sent back.

The lieutenant wasn’t excited at the sight of an American student who was sharing soft drinks with the center’s personnel, prying into national security matters for her college thesis. Nonetheless, the lieutenant used this opportunity to detail the high costs that the Jordanian military incurs in being a good neighbor. Since the beginning of the failed revolution, Jordanian border guards have facilitated border crossings for refugees and provided food, water, and ambulances to the victims of the violence starting just kilometers away. His implicit message, of course, was a plea for greater financial assistance from the U.S.

The Jordanian military does, after all, fulfill a tall order — primarily a U.S order. They have largely succeeded in containing the fighting between Jabhat a-Nusra, the Free Syrian Army, and al-Assad forces to the Dera’a-side of the border (minus the occasional shells that fall on Ramtha and other border villages. All the while, the military’s intelligence networks and border guards keep tight watch of the 375-kilometer border and repel Da’ash’s [ISIL’s] attempted incursions. Indeed, so much border drama tension has led Jordanian Security to repeatedly close border crossings, leaving hundreds of Syrian families stuck and impeding Free Syrian Army (FSA) South Front leaders from moving back and forth between countries.

Border and registration procedures become more complicated when dealing with Syrians who didn’t deliberately leave their homes for Jordan, but rather were rushed to the borders, both from civilian neighborhoods and the sites of skirmishes.
For every regime tank that fires on civilian apartment buildings and Palestinian refugee camps, or barrel bomb that devastates neighborhoods of southern Syria, in Dera’a, Quneitra, and the Damascus countryside, a new wave of Syrians arrive at Jordan’s border. The same goes for various members of the armed opposition whose battle injuries largely exceed the capacities of south Syria’s field hospitals.

Jordanian Security and intelligence are present at each point on the route that Syrian trauma patients take while receiving medical care in Jordan. Members of Jordan’s Civilian Defense escort each injured Syrian to their first stop at Ramtha Government Hospital using the ambulances that are stationed at the border. If and only if these patients have or collect the funds, a police officer escorts and supervises each patient, lady officers for injured females, during their next stop at private, specialized hospitals, mainly in Amman. And after they have received the most urgent surgeries, or their hospital bed is needed, the fates of these patients are decided at the Ruba’a al-Sarhan. Almost everyone needs further treatment, but only some are sent to Za’tari (to be escorted by police to their appointments at a later date). The rest are sent back to the dangerous zones in Syria from which they came.

There are several reasons why Jordanian Security has taken such an involved role in controlling the movement of Syrian trauma patients in Jordan. Health professionals at the private hospitals that receive Syrians proudly state that they don’t inquire into their patients’ backgrounds or affiliations. “Even if Bashar’s son came here, I would treat him,” as a doctor at Bayader Hospital put it. Yes, Jordan is opening these spaces to civilians and non-civilians alike, but its intelligence and security apparatus are making up for the neutral humanitarianism. While suspicions of Jordan providing indirect support to non-moderate groups in Syria keep circulating, spaces like hospitals continue to be very sensitive.

Most of these private hospitals began receiving Syrian patients from the borders less than a year ago, when Syrian doctors in Jordan organized to request entire floors of private hospitals in Amman. Loose networks brought these doctors together and their informal groups operate just outside the scope of recognition of the Jordanian state. That’s because under Health Ministry regulations, Syrian doctors are prohibited from practicing medicine in Jordan. They may only manage the logistics of patients’ transfers, while Jordanian doctors are expected to perform all surgeries and treat patients. Yet the Jordanian government turns something of an acquiescent blind eye to the Syrian doctors who clearly run these wards. Jordanian doctors help give the guise of compliance by briefly visiting the Syrian floors each day to sign off on official paperwork and register for the surgeries of Syrian patients.

Yet most Syrian doctors provide their crucial service to Syrian trauma patients in fear. Dr. “Al Ghouta” described the protocol for hiding in the hospital’s basement and Dr. “Dariya” showed me the fake patient ID he uses to disguise himself during the Health Ministry’s monthly visits.

The recent history of these doctors further exemplifies their steadfast dedication to serving the victims of violence in Syria. Their positions in Jordan are precarious, but let’s not forget that most of them also managed to escape the regime’s targeting of doctors in Syria and the continuous threat of fire on field hospitals where many worked. These doctors use their connections to provide synchronized responses to daily events in south Syria and to personally monitor trauma victims as they make their way to ICU’s in Amman.

Three and a half years later, spillover of Syria’s violence is the norm, to the extent that formal policies in Jordan are in place to manage it. Three and a half years later, about half of Syrian doctors have left the country, on to the next phase of helping their compatriots in more feasible ways (www.physiciansforhumanrights.org/syria-fact-sheet) For those who don’t have the luxury of just turning off the news, accommodating for this violence is business as usual.

Katy Montoya is a senior at Swarthmore College, majoring in Political Science and minoring in Arabic Language. Her fieldwork in Jordan over the past two summers is the basis of her research on state-supported and informal civil networks for Syrians inside Jordan. This research was made possible by the support of the European Research Council’s WAFAW project (www.wafaw.org) and by the J. Roland Pennock Fellowship in Pubic Affairs.