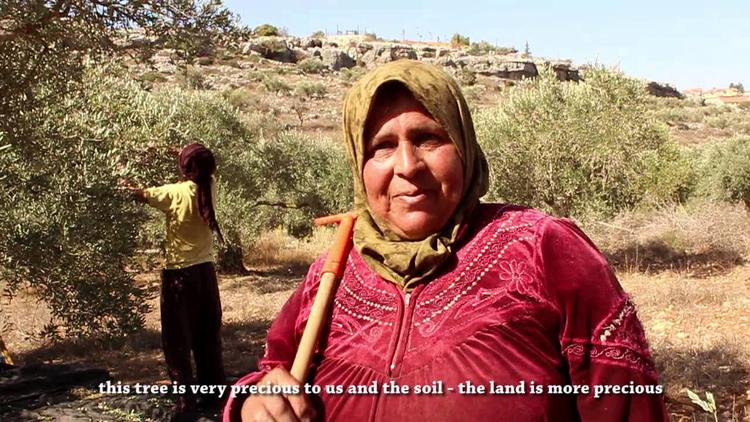 SALFIT (Ma’an) — A large group of Israeli settlers on Saturday morning violently beat a young Palestinian woman while she was picking olives from trees in an orchard in the village of Yasuf in the Salfit district in the central West Bank, a Palestinian official said.

The assault is the third such attack on Palestinian olive pickers in three days, creating concern about unchecked settler violence as the olive harvest kicks off across the West Bank.

Ghassan Daghlas, a Palestinian Authority official who monitors settlement-related activities in the northern West Bank, told Ma’an that 25-year-old Alaa Fathi Atiyani and her children were picking olives in a field in the al-Masamic area outside of Yasuf village at the time of the alleged assault.

He said that ten settlers arrived from the nearby Kfar Tappuah settlement and assaulted Atiyani, beating her “brutally.”

Daghlas said Atiyani sustained serious bruises all over her body as a result of the attack.

Daghlas added that Israeli troops arrived later and claimed to have arrested the assailants.

An Israeli military spokeswoman said that “clashes” took place “between settlers and Palestinians” in the area and Israeli police arrested four people.

The assault is the third such attack on Palestinian olive pickers in three days, including the second on the village of Yasuf.

On Friday, settlers from Kfar Tappuah attacked the village and burned down several olive trees belonging to a villager. None of the assailants were reportedly detained by Israeli authorities after that assault.

Because the attacks occur outside of the village, they largely fall in Area C, which is under complete Israeli military control and thus beyond the purview of Palestinian security forces, who rarely intervene.

Villagers are thus subject to the whims of Israeli authorities, who rarely intervene in the violent attacks or prosecute the perpetrators. Arrests, meanwhile, are largely symbolic, and assailants are rarely charged.

Attacks on the fall harvest are a key way that Palestinians are forced out of their homes and their lands confiscated for settlement construction, as the loss of a year’s crop can signal destitution for farmers with no other way to support themselves.

According to a 2012 report on Israeli settler violence released by the Palestine Center, a Washington-based nonprofit, every year the olive harvest period sees the highest peak in attacks on Palestinian civilians and property.

Over 7,500 olive trees were damaged or destroyed by settlers between January and mid-October in 2012, according to OCHA.

In 2013, there were 399 incidents of settler violence against Palestinians in the occupied West Bank, according to the UN Office for the Coordination of Humanitarian Affairs.

Al’Ard Right to My Olives