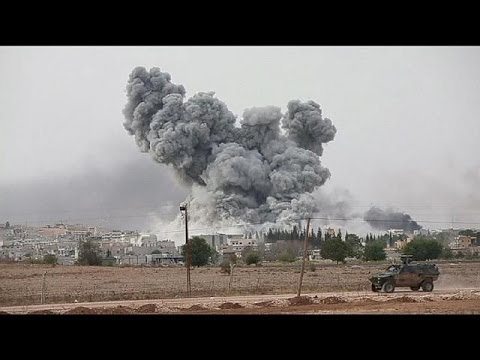 For many Kurds, Ankara’s spectator role in Kobane is a systematic policy to weaken PKK to get more leverage in the peace talks.

The radical ISIL group is besieging the Kurdish town of Kobane in Syria, and so far the Turkish government has done little about it. It is the leftist, separatist Kurdistan Workers Party (PKK) of southeast Turkey and the People’s Protection Units (YPG) — the armed wing of the Syrian-Kurdish Democratic Union Party (PYD) — that are mounting the most vigorous Kurdish response to ISIL’s attacks. Turkish Kurds have mounted substantial urban street protests against government inaction. The death toll in Turkey from the crackdown on these Turkish-Kurdish protests is four times the number of victims in the crackdown on the youth protests against Neoliberal construction projects in summer of 2013 at Gezi Park in Istanbul. The ostensible impetus for the Kurdish protests in Turkey, the crisis in Kobane, is just the tip of the iceberg. Mutual frustration over the Peace Process, launched by the AKP government’s official negotiation with the Kurdistan Workers Party (PKK) since March 2013, is the main issue at stake.

The PKK has become increasingly aggressive as its demands have long been postponed, whereas the ruling Justice and Development Party (AKP) government is dissatisfied with its decreasing leverage over the PKK as the PKK/PYD forces gain international legitimacy for their defensive war against ISIS. Last week, the AKP government launched airstrikes against the PKK for the first time since the declaration of ceasefire in 2013 as well as declared a “road map” to indicate its commitment to peace negotiations. The road map was penned by Hakan Fidan, the chief of the National Intelligence Agency, receiving consultation from jailed PKK leader, Abdullah Ocalan.

Now, all eyes on the PKK commanders in the mountains.
Divisions among Turkey’s Kurds further exacerbate the fragile situation. Last week, the PKK’s longtime rival pro-Islamic Hizbullah announced that the Peace Process has ended because of the recent violence against Huda-Par, a legal political party having ties with Hizbullah, rejecting the claims that they have close relations with ISIS. Both PYD and ISIS find recruits from both rival PKK and Hizbullah constituencies in Turkey and the war spillover may push Turkey’s Southeast into a mayhem if PKK and Hizbullah revive their feud. According to unofficial reports, as many as 600 Kurdish fighters joined ISIS from Southeast Turkey.

As both PKK and Hizbullah allege that mysterious agents provocateurs connive at triggering tension between them, old rumors make a swift comeback with conspiracy theories. In 1990s, both groups suspected that they suffered from false-flag operations by the state intelligence officers. Memories of the dirty war years are still fresh. Although the Kurdish guerrillas committed much violence, it is also true that thousands of Kurds simply disappeared because they were alleged PKK or Hizbullah sympathizers. Assassinations against pro-Kurdish politicians sky-rocketed. Dead bodies and tortured corpses were found in the outskirts of the cities. In a move reminiscent of the dirty-war years, the AKP government recently introduced a new law that grants impunity for National Intelligence Agency (MIT) operations. Such policies of securitization are not going to help in building peace in the region.

The crisis in Kobane could have been an opportunity to strengthen Turkey’s peace talks with PKK. If there is one single key to transforming an intractable ethnic conflict, that is trust. An early attempt for humanitarian corridor supported by Turkish troops could have been a step to increase bilateral trust. Had a sympathetic official discourse about the plight of Kurdish civilians been employed, Turkey’s inaction in Kobane might not have instituted such massive protests. Turkey’s President Erdogan, however, chose to equate ISIS and PKK in his speeches and portrayed the situation as a fight between two terrorist camps. Such language, if persists, would lead an increasing mistrust between pro-Turkish and pro-Kurdish constituencies.

The danger of backsliding is real.

In his theory of revolutions, popularly known as “J-curve” theory, James Davies argues that people’s mood get most disruptive when their increasing expectations are met with a major frustration. For Davies, radicalization does not occur under the most repressive regimes. Instead, a prolonged period of economic and social prosperity followed by a sharp decline is the moment for riots and revolutions. Thus, the crux of the matter is relative deprivation, not real discrepancy. Enjoying unprecedented economic and social benefits in recent history, Turkey’s Kurds demand more as an outcome of relative deprivation. Pro-Turkish constituency, however, increasingly question if it is ever possible to satisfy pro-Kurdish demands. This major gap between two constituencies is partly due to the AKP government discourse. The AKP presented pro-Kurdish reforms through a doublespeak, even at times competing with Turkish nationalist parties, and thus, have boosted the expectations for both Turkish and Kurdish constituencies. Therefore, growing frustrations in both sides may lead symbiotic clashes between Turkish and Kurdish hawks, silencing moderate voices.

The AKP government is at a crossroad. If Turkey needs a Kurdish buffer zone in the Middle East, the peace settlement with the PKK is a significant step forward. Such a step, however, entails not only bullet-point road maps written by intelligence chiefs but also well-crafted bilateral trust building. Equating ISIS and PKK would be a strategic mistake especially when it doubled with a hard-line enmity discourse that revives old feuds.

MUSTAFA GURBUZ is a policy fellow at Center for Global Policy at George Mason University and a research fellow at Rethink Institute in Washington, DC. He is the author of Transforming Ethnic Conflict: Rival Kurdish Movements in Turkey (Forthcoming, Amsterdam University Press).

Euronews: “Calls for a ‘humanitarian corridor’ between Turkey and besieged Kobani”