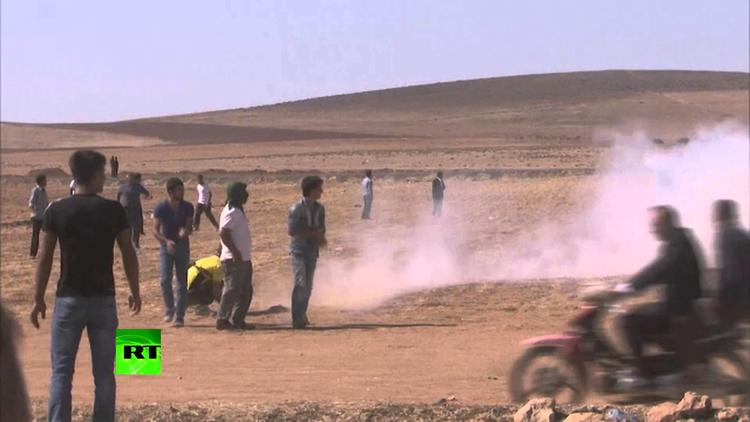 ISIL fighters have advanced into the Kurdish Syrian city of Kobane (`Ayn al-`Arab), with fighting in the streets as Kurds resist, according to the pan-Arab daily, al-Hayat [Life]. Kobane, a city ordinarily of about 50,000, is the third biggest town in the Kurdish part of Syria (the far northeast). ISIL has taken dozens of nearby Kurdish villages, provoking an exodus of perhaps 300,000 refugees, with about 180,000 going to Turkey. Turkey now has over a million Syrian refugees.

Iran is complaining about the West hanging the Kurds out to dry.

Erdogan says he is seeking authorization for a ground operation at Kobane. Erdogan doesn’t typically seek authorization for his actions, however, so that this is his story is suspicious and many Kurds think he does not want to intervene lest he inadvertently help the Kurdistan Workers Party (PKK) guerrillas and their allies. Turkey fought a three-decade dirty war against the PKK from the 1970s to the 1990s, and the organization revived a bit after Washington overthrew Saddam Hussein and so allowed 5,000 of them to take refuge in Iraq (which borders eastern Turkey). Most Turkish Kurds are not separatists, but a small fringe is and Ankara fears any development that might strengthen the fringe and lead to a breakup of Turkey.

On Tuesday, thousands of Kurds demonstrated in cities all over Turkey against Erdogan’s lack of action, with some clashing with police. Ten Kurds were killed and dozens injured. For its part, Turkey called for more coalition airstrikes on ISIL.

Turkey’s secular centrist opposition party, the CHP, demands that its troops stay out of Syria.

CENTCOM (the US military command for the Middle East) announced that US, Saudi and United Arab Emirates war planes had conducted 5 bombing raids on the outskirts of Kobane on Tuesday. Kurds are complaining that they don’t seem to be effective in stopping ISIL’s advance.

My guess is that the US is hampered in precision strikes on ISIL positions and tanks by the lack of personnel on the ground who could paint lasers on them. The US military typically will not allow other forces to undertake this task for fear of their manipulating the US Air Force into attacking their enemies. Hitting a tank from 30,000 feet is almost impossible without smart munitions, and flying low is dangerous because ISIL might be able to shoot a plane down. One officer who had served in WW II once told me that if you bomb a tank and miss, you just get a scratched tank. You can’t do carpet bombing, either, in the vicinity of a city you are trying to save. The UAE and Saudi Arabia likely don’t have the technology to deploy precision-guided bombs or trained laser spotters. I hasten to say that I am not advocating putting spotters on the ground, simply analyzing why air raids are ineffective against a guerrilla group with a small armored unit (likely 25 tanks around Kobane, which is 25 more than the Kurds have).

Bottom line, Erdogan may be right, that these are the last days of Kobane before a deadly darkness falls.