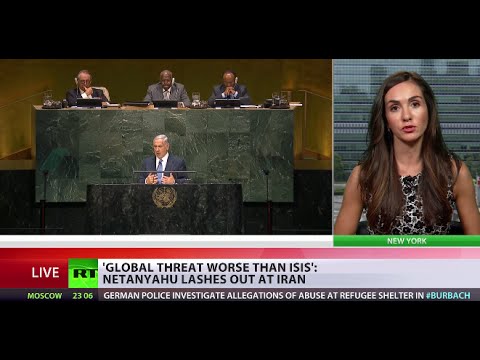 With negotiations to limit Iran’s enrichment in return for easing of economic sanctions on the verge of failure, hopes for a step-by-step diplomacy to dismantle Iran’s nuclear program are once again dashed.

“Once Iran produces atomic bombs, all the charm and all the smiles will suddenly disappear. They’ll just vanish. It’s then that the ayatollahs will show their true face and unleash their aggressive fanaticism on the entire world. There is only one responsible course of action to address this threat: Iran’s nuclear military capabilities must be fully dismantled. Make no mistake – ISIS must be defeated. But to defeat ISIS and leave Iran as a threshold nuclear power is to win the battle and lose the war.”

Therefore, with the threat of military action in the background, economic sanctions are used to compel the regime to end its nuclear weapons program.

Since 2007, with intelligence reports showing Iran had suspended its nuclear weapons program in 2003, the focus of US policy has shifted to preventing Iran from developing even an independent civilian nuclear technology, ostensibly to deny Iran the know-how to develop nuclear weapons quickly in the event of a crisis, what is called breakout technology.

A fundamental question not raised by mainstream media and some established academics and the likes of Netanyahu is if Iran wants the capability to develop nuclear weapons, what could be her reasons.

One possible reason, and the most obvious, is that Israel, less than a thousand miles away, has hundreds of nuclear warheads and the means to deliver them to targets deep inside Iran. As with the United States and the Soviet Union after WWII, if one side has nuclear weapons, it would be difficult to expect the other side not to develop the same capabilities. To refrain from doing so would be to place national security at the mercy of another country, your foe. In fact, once parity is achieved, the relationship between nuclear powers is supposed to stabilize. There would be no temptation to use nuclear weapons, even to put pressure on the other side for political reasons (nuclear blackmail) out of fear of escalation. Rationality, a shared human trait, dictates that neither side would risk nuclear annihilation.

Any nuclear attack would bring massive retaliation that result in mutual destruction. In the case of Iran and Israel, Iran will not be able to destroy Israel’s retaliatory capabilities. Israel’s nuclear weapons are spread on land, in the air and on submarines. But even if Iran could destroy Israel’s capacity to retaliate, the relatively short distances and the prevailing easterly winds will guarantee that its nuclear blasts over Israel would shower its own people with deadly radioactive material in a rather short order.

Second, Iran does not have a modern conventional force while Israel has a large stockpile of latest American made weapons and well-trained personnel to use them. Iranians, in contrast, have been denied access to modern conventional weapons for at least 25 years including defensive systems such as the Russian SAM-300 surface to air missile system largely because of American pressure.

Lastly, there is a large American military presence around Iran. U.S. Navy has been present in Persian Gulf since the 1980s. Since 2002, U.S. ground forces have been stationed in Iraq, Kuwait, and Afghanistan. The United States has invaded and occupied Afghanistan and Iraq in clear violation of international norms and based on manufactured evidence in only the last dozen years. It has armed Saudi Arabia and UAE heavily for the past twenty years with some of America’s most sophisticated missiles and fighter-bombers. Sitting in Tehran, it is difficult for the rulers of Iran not to fear an American invasion. As far as they can see it, if Saddam Hussein had nuclear capability, he would still be in power in Iraq. Nuclear weapons or more likely the capability to build them in a hurry could act as an independent deterrence against the United States and its regional allies.

Given Iran’s weak conventional forces, even nuclear disarmament is only a first step that should be followed by deep cuts in offensive conventional weapons in the whole of Middle East. It is unlikely for Iran, as a rational actor, to abandon the only means of deterrence available to it if the threat of an American invasion remains on the table. Arms reductions by US allies to defensive levels and departure of US forces are the only rational foreign policy options that would insure the security of every state in the region while still fitting into the United States’ and Israeli security interests, even if the central issue of Israeli occupation-Palestinian rights is left untouched.

Israel does not need a conventional force with powerful offensive capability. It has peace treaties with two of its neighbors, Egypt and Jordan. It would have been able to sign a favorable peace treaty with Syria in 2006 if it had wanted to, and the weakened Assad would be at least as ready to sign one today. The Arab League’s 2002 proposal offering Israel both recognition and full diplomatic relations in return for Israeli withdrawal to the 1967 borders is still on the table. As for US’ Arab allies, even with cuts in their armed forces, they will have enough to keep themselves in power. For the US, departure of its ground forces from the region alone can do much to improve its negative image among the Arab and Muslim publics. There is no reason for maintaining a naval presence in the Persian Gulf either. Countries in the region depend on oil revenues for the bulk of their annual national budgets and thus have no logical reason to disrupt the flow of oil. A major obstacle to all of this, of course, is the profitable arms market. US sells 70% of the world’s weapons and most of that in the Middle East. Israel is the seventh largest exporter of arms worldwide.

‘Global threat worse than ISIS’: Netanyahu lashes out at Iran once again