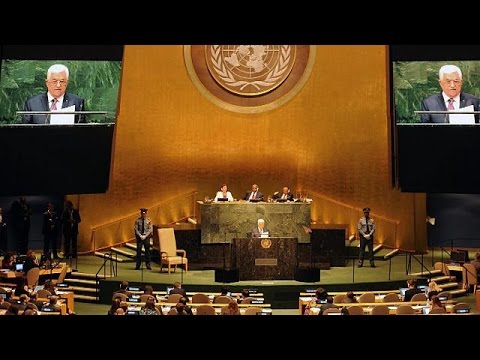 AP reports that Palestine is presenting a resolution to the United Nations Security Council (through its “Arab Group”) calling for a complete Israeli withdrawal from the West Bank, including East Jerusalem, by 2016. Palestine will argue that Israel has systematically and over decades violated all the international laws regulating military occupations, and that it is quickly marching toward being an Apartheid state (Apartheid is itself a form of crime against humanity).

The UN Security Council has five permanent and ten rotating members, but each of the five permanent members can exercise a veto. The United States, despite prevaricating statements attempting to represent itself as an honest broker, has almost always vetoed any UNSC resolution criticizing Israeli actions, even though these actions clearly violate the Hague Regulations on Occupied Territories, the Geneva Conventions, the Rome Statute and other bodies of international law.

So the likelihood is that the US will veto the resolution of Mahmoud Abbas. Though who knows, maybe a lame duck Barack Obama will finally show some spine and simply abstain instead of vetoing. The UNSC can put economic sanctions on Israel if it is defied (just as it has sanctioned Iran and North Korea, two other egregious violators of international human rights norms.)

If the US does veto the resolution, then Washington is clearly saying that it is all right with American elites if Israel goes on stealing Palestinian land on a vast scale and expropriating and oppressing the stateless Palestinians under its boot.

In that case, Palestinian circles are suggesting that Mahmoud Abbas will have no choice but finally to go to the International Criminal Court to charge Israel with crimes against humanity (i.e. systematic war crimes). This step is serious, since the US cannot block the ICC and any judgment it delivered against Israel would be taken seriously in the European Union and many other countries.

Palestine president Mahmoud Abbas … signed a some 15 international treaties and UN legal instruments, including the Geneva Conventions, in preparation for going to the International Criminal Court over Israel’s illegal flooding of hundreds of thousands of Israeli squatters into the West Bank. These squatters have for the most part never paid Palestinians for the land on which they build their homes. They completely exclude Palestinians from their colonies on Palestinian land. Often they prevent Palestinian farmers from harvesting their crops near the settlements. They commit vandalism against Palestinian property and sometimes just shoot down Palestinian civilians. Over time, they aim to make an Palestinian state impossible by turning it prospective territory into Swiss cheese…

. . . the Palestinians signed the UN instruments and treaties that would strengthen their hand when and if they take their case to the International Criminal Court. They are also joining more UN agencies and committees, something both Israel and the US have opposed, since they don’t want Palestine recognized as a state by the international community before Israel itself can set the terms for such a state.

The ICC was established by the 2002 Rome Statute, so that previous generations of Palestinians would not have been able to resort to it. Even then, it could only take up cases of member nations, and since Israel had not signed the treaty and Palestine was not a member state, the ICC could not consider the case of Palestine until recently. Another way a non-member state can be taken to the ICC is if the UN Security Council forwards a case to it. But the US screws over the Palestinians by consistently vetoing any UNSC ruling against Israel.

The Palestinian leadership is said to have unanimously backed Abbas in taking this step.

Abbas said, “We do not want to use this right against anyone, and do not want a confrontation with America. For we have an excellent relationship with it.” He praised Secretary of State John Kerry for his energetic diplomacy on the issue.

“We just could find no other path forward.” Given Israeli footdragging on the prisoner release, Abbas said, he was going to join UN organizations and agencies. He had agreed to put that off for 9 months, but that period has come to a close.

Palestine has gained nothing from the negotiations, since Israel has increased the size of the settlements and announced thousands of new housing units on Palestinian land since August when they began. In essence, Israel has been grabbing up the very territory over which the negotiations are being held– sort of like if you’re talking with friend how to share a piece of cake when suddenly he starts eating it up.