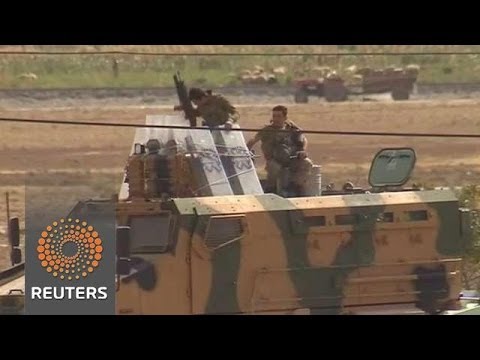 The Turkish parliament voted by a large margin Thursday to allow Turkish troops to make incursions into neighboring countries if necessary to defeat the so-called Islamic State of Iraq and the Levant (ISIL). This authorization is necessary according to the Turkish constitution. Likewise, parliament voted to allow foreign troops involved in the fight against ISIL to be based on Turkish soil. This provision may allow the US to use its Incirlik air force base against the terrorist organization, which Turkey has so far disallowed.

These decisions are a significant turnabout from a month ago, when Turkey seemed reluctant to get involved. What is driving the ruling Justice and Development Party (Turkish acronym AKP) to join the American effort against ISIL?

1. Its European entanglements: Turkey has gotten enormous pressure from President Obama, French president Francois Hollande and UK PM David Cameron to join. For their part, they need the largest Sunni country in west Asia on their side to avoid having the campaign against ISIL look like a Christian-Shiite Jihad against Sunnis. Turkey values its NATO membership and will want to fulfill obligations to other NATO members. President Tayyip Erdogan also very much wants Turkey to be accepted into the European Union, and may figure that proving Turkey’s worth in fighting a Muslim extremism that seems threatening to Europe may gain him some good will in the EU. Also, Turkey fears that if the West does manage to inflict attrition on ISIL, the Baathist regime of Bashar al-Assad might benefit, but Turkey wants to see it overthrown. Being in the coalition allows Turkey to demand that pressure be kept on al-Assad to step down.

2. Turkey has backed the Syrian National Coalition and the Free Syrian Army against the Baathist government of Bashar al-Assad in Damascus. The former two organizations are dominated by a Turkey ally– the Muslim Brotherhood. (Turkey’s own AKP is mildly inflected with a rhetoric of political Islam and just passed a provision allowing middle- and High School female students in state schools to veil, a practice that had been forbidden by 20th century secular governments). In the past couple of years, ISIL has consistently defeated the Free Syrian Army. Turkey wants to build back up the Free Syrian Army “moderate” opposition to both the Baath (socialist Arab nationalist) government in Damascus and extremists like ISIL.

3. Turkey is hoping to persuade the United States to impose a no-fly zone on northern Syria near Turkey. Ankara is convinced that the Syrian Baath government deliberately uses its air power against the Free Syrian Army so as to allow ISIL to win their battles. A no-fly zone would level the playing field, perhaps allowing the FSA finally to make progress and widen its territory. (In my own view, it is highly unlikely that the US will agree to patrol Syrian skies with F-18s, nor would it be legal in international law).

4. Ahu Özyurt argues that Turkey’s business classes, which largely back the ruling AKP, fear negative fallout on investment and stock valuation if ISIL continues to be strong and to neighbor Turkey. She says,

“Economically, supporting the anti-ISIL alliance might be Turkey’s best bet. With every mortar shell hitting Turkey on Sept. 29-30, the stock market lost points and interest rates increased. Over the weekend, Fitch will most likely downgrade the outlook for Turkey.”

5. Newly elected President Tayyip Erdogan and Prime Minister Ahmet Davutoglu had feared taking on ISIL this past summer because it had taken hostage some 40 Turkish diplomats at the Mosul consulate. Last week, a deal was reached for the release of the consulate officials and workers. Had they been beheaded by ISIL, it would have deeply harmed the political reputation of Erdogan and Davutoglu. They would have looked helpless and not in control. But now that the hostages have been let go and are out of harm’s way, Erdogan and Davutoglu no longer need fear looking like Jimmy Carter during the Iran hostage crisis.

6. Turkey has had fruitful negotiations with separatist Kurds of the Kurdistan Workers Party (PKK) about having the latter cease attacks in Anatolia. The leftist PKK and its Syrian branch, the YPG, is now a major guerrilla force taking on ISIL and was largely responsible for rescuing the Yazidis trapped at Sinjar. The Kurdish town of Kobane is now under siege by ISIL, and PKK leader Abdullah Ocalan is warning that if Turkey lets Kobane fall, the PKK will cut off its negotiations with Turkey. (Tens of thousands of Kurds have recently fled into Turkey from Syria in fear of ISIL). Turkey doesn’t want to see the PKK and YPG strengthened, as they may be if they can claim sole credit for fighting off ISIL.

7. Tomb of the grandfather of the founder of the Ottoman Empire is in Syria, but is considered Turkish soil. It is guarded by Turkish special ops forces. If it fell to ISIL, that would make Erdogan and Davutoglu look bad, especially since they champion pride in the Ottoman, Muslim heritage of Turkey that had been viewed negatively by previous, secular Turkish governments.