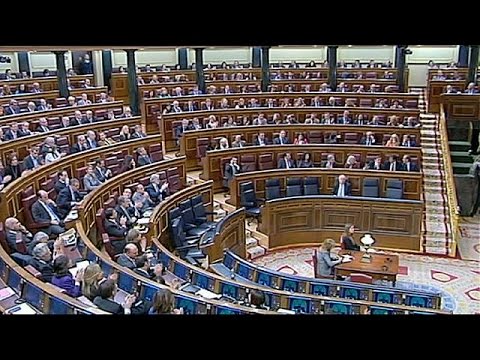 “Spanish MPs have urged their government to recognise the Palestinian state.

The a non-binding resolution presented by the socialists won the backing of all the political groups of the lower house, and would only ask for recognition when the Palestinians and Israel negotiate a solution to their long-running conflict.

“The Spanish Parliament unanimously believe that the recognition of the Palestinian state is the best contribution we can make to achieve peace.”

From Wafa Arabic via BBC Monitoring :

“A Palestinian presidency-controlled news agency Wafa website report posted at 0627 gmt says that the Palestinian Foreign Ministry “welcomed the decision of the Spanish Parliament’s majority on the evening of 18 November, calling on the Spanish Government to recognize the state of Palestine. Foreign Minister Riyad al-Maliki expressed the Palestinian leadership’s gratitude and appreciation of Spain and the Spanish parties which approved this important and historical memo. He said: ‘This recognition reflects an advanced and historical stance of our friend, the kingdom of Spain. It is a step forward in its ties with the Palestinian people. It is in harmony with Spain’s principles and noble values which respect the international law and the resolutions of the international and humanitarian legitimacy’.” The report adds that Al-Maliki called on the Spanish Government to recognize the state of Palestine “in order to initiate serious and successful peace negotiations between the Palestinians and the Israelis based on the two-state solution.”