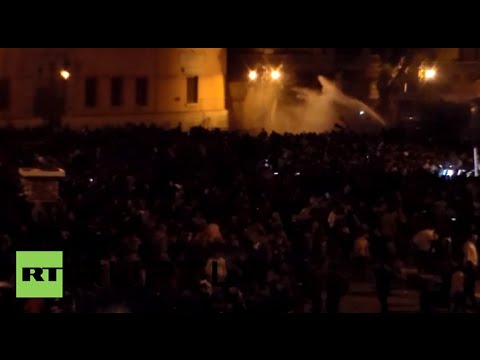 An Egyptian court on Saturday found found deposed dictator Hosni Mubarak and his former interior minister Habib Adly not guilty (or rather just dropped the charges) the killing of nearly 900 young protesters by police in January-February 2011.

Downtown Cairo and some provincial towns erupted in protests. Indeed, these were probably the largest protests since the crushing of the Muslim Brotherhood in August, 2013. The police had closed off Tahrir Square in downtown Cairo, but demonstrators gathered in the thousands in an open space nearby, near the Egyptian Museum. They chanted that the people want the fall of the regime, and denounced the ruling as corrupt. Egyptian police sources maintain that the protests were peaceful until about 6pm, when, they allege, Muslim Brotherhood fifth columnists infiltrated the protests and began turning violent. Two protesters were killed and 11 injured, mainly through severe inhalation of tear gas or being hit by they tear gas canisters. I doubt the Muslim Brotherhood story. Most of the protesters on Saturday were probably leftist youth. The religious fundamentalists had tried to get up demonstrations on Friday, but very few protesters showed up, and the leftist youth boycotted the action, which slammed “secular” government in Egypt.

The bad thing about this ruling is that the judge actually argued that the charges should never have been brought against a former president for actions undertaken as part of his office. Egyptian judges still think that worshiping power is more important than holding officials accountable for crimes. Contrast this attitude to that in France, where police raided the home of former president Nicholas Sarkozy on suspicion that he had taken illicit money for his campaign. To be fair, the Egyptian attitude is more like that of Americans. President Gerald Ford pardoned Nixon, and Nancy Pelosi pledged that there would be no action against Bush and Cheney for their illegal war.

(For background see The New Arabs: How the Millennial Generation is Changing the Middle East

So the verdict is a step away from the principle of the accountability of public officials– precisely one of the principles young people sought to establish by their youth revolutions in 2011 and after.

On the other hand, I do have to admit that the original verdict against Mubarak was jurisprudentially very problematic. The judge argued that since Mubarak surely had had the authority to stop the killings of protesters (leaving aside the question of whether he ordered the deaths, for which there is no documentary proof), he was guilty for not having intervened to stop excessive police use of force. This is more like a logical deduction than a judicial finding.

Still, the grounds for this acquittal are equally if not more problematic. It wasn’t an official duty of Hosni Mubarak when president to have protesters killed. He therefore can’t have the immunity of simply doing his job. And it sends a very bad signal throughout the region to authoritarian rulers that they now again don’t have to worry about accountability (Egypt is a fourth of the Arab world and an opinion leader).

It is a little unlikely that the return of protests will last very long. Most Egyptians seem shell-shocked by the changes of the past 3 1/2 years, and are tired and cautious. The military government has been handing out long jail sentences merely for engaging in peaceful street protests. It is therefore hard to mobilize people at the moment, though it could happen again down the road.

The only silver lining of the current situation is that the old Mubarak political and financial elite, the fulul or left-overs, are being reincorporated into public life. Those who committed criminal acts should not be rehabilitated, of course. But South Africa dealt with former regime elements by having them confess in detail to their crimes, after which they were released. What’s wrong here is that Mubarak and his gang are still unwilling to confess. For left-overs who had not been guilty of committing any obvious crimes, it is probably healthier to have them come back into public life than be excluded and sullen (the wealthy are in a position to make a lot of trouble). One big difference between so far relatively stable Tunisia and unstable Libya is that after the first two years, members of the party of former Tunisian dictator Zine El Abidine Ben Ali were allowed to come back into politics in 2014. In Libya, as in Iraq, the old elite was excluded and stigmatized, and instability ensued. In Egypt there is the wrinkle that the secondary elite, the Muslim Brotherhood, has been more thoroughly excluded from public life than the fulul ever were. Human Rights Watch pointed out that there are Aljazeera and other journalists in jail in Egypt for just doing their jobs, and Mubarak has been acquitted of killing people.

The progressive youth are weeping tears of helpless rage today, as one of the achievements of their revolution– making public officials accountable– has inexorably slipped away. Liberal parties like the Wafd are also upset. The Egyptian judiciary, once a trendsetter for the Arab world, is increasingly making itself a laughingstock.