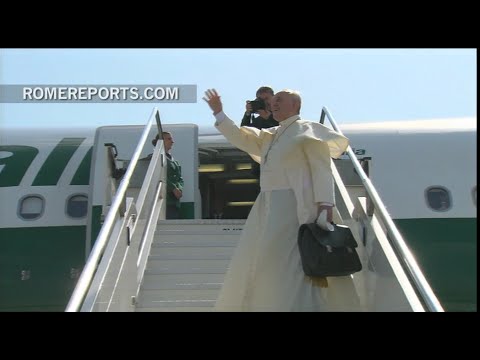 The Vatican has confirmed that Pope Francis will visit Turkey on 3-day official visit from November 28 to 30. However, the publication of Turkey’s official invitation letter in Milli Gazete, a Turkish daily, has caused an enormous stir in the country. As a result, Pope Francis’s visit has stirred controversy among opposition circles of Turkey.

President Recep Tayyip Erdogan’s style in the letter (which was in a similar form sent by earlier heads of state) was criticized harshly. The September 10, 2014 dated letter starts with a cordial address “His Holiness Francis,” which critics said constituted inappropriate exaltation and admiration on the part of Erdogan.

Pope Francis’s visit itinerary is not materially different from the earlier papal visits of Paul VI (1967), John Paul II (1979), and Benedict (2006): except for Paul VI, all the popes visited Turkey on the feast of St. Andrew (Patron Saint of Patriarchate and his feast is celebrated on November 30). Since Turkey is not a Catholic country (0,07% of the 76 million population), the pope’s main objective is in fact to meet the Orthodox Patriarch in Istanbul to advance inter-Christian relations. These trips start in Ankara with official meetings with Turkey’s President, Prime Minister to pay his respects, and public authorities in addition to paying an official visit to the President of Religious Affairs on the first day. The papal journey continues in Istanbul the next day by visiting Saint Sofia Museum and Sultan Ahmet Mosque and a mass celebration at the Catholic Cathedral of the Holy Spirit. The third day, on November 30, is the climax of the papal visit by celebrating Divine Liturgy in the Patriarchal Church of St. George participating in the Orthodox Church’s feast.

Whereas the Vatican has concerns over the current problems and future of Christians in the Middle East with the latest developments and the Patriarchate seeks to improve its ties with the Church of Rome for Turkish authorities it is just another foreign official visit, which would contribute to build good relations between the Christian West and the Islamic East. In fact, the Pope had originally been sent an invitation by Patriarch Bartholomew I of Constantinople earlier but the Pope anticipated an official invitation from the Turkish political authorities in his status of being a “head of state”.

The title of the newspaper article reporting on Erdogan’s invitation was very provocative in nature, claiming that the president had engaged in “unfortunate praises”. In fact, it was simply a custom or a protocol rule, or at least, etiquette to respect another culture. As in the address to the British Queen “Her Majesty” although one may not think that she is “majestic”; the title “holiness” does not necessarily indicate that one thinks the Pope is “holy”. This addressing style was compared with the historical letter (1536) of the Ottoman Sultan Suleiman the Magnificent to the French King François with full of praises of the Sultan and a simple address to the King of France. The news item continues to criticize Erdogan on his “insistently” inviting the Pope, which is not even possible considering the hectic first days of his presidency; as in the same item and in the letter, it is clear that it was only a renewal of the previous President Abdullah Gul’s official invitation.

Inter-faith dialogue has the hope of enhancing mutual respect among the followers of different faiths. It is true that there is a segment of Turkish society that is against inter-religious dialogue, saying that it had been initiated by the Catholic Church especially after the Second Vatican Council and the Muslims had been relegated to being its subject rather than an equal partner in the dialogue meetings. It is interesting that although this dialogue process had been promoted mainly by the Gulen Movement, they also joined the criticisms by emphasizing the “hypocritical praises”. A faith-based group who is experienced in promoting inter-faith dialogue outside of Turkey should be aware of the etiquette rules in addressing the clergy of other faiths and should be more than content when the state is willing to meet the Pope. The Gulen movement, part of the Turkish religious Right, had been a member of President Erdogan’s coalition earlier, but has broken with him and become his biggest critic.

The papal visit will also mark the first official welcoming ceremony at the newly constructed the so-called Ak Saray “White Palace”, which has caused another stir among opposition circles in Turkey. The presidential palace has been criticized for its grandeur and its lavish cost. The president’s supporters maintain that the old and almost derelict offices of the prime minister desperately needed to be replaced. Some groups have asked the Pope not to participate in the official welcoming ceremony at the new presidential palace by urging him to protest Erdogan. They believe that Pope Francis is against capitalism and he would refuse to “legitimize” what they see as luxurious consumerism. The pope, as a guest, however, may not have much choice in the matter.

It is too bad that the papal visit is being dominated by partisan sniping of this sort. There are after all potentially weighty items thatcould be put on the agenda, such as a solution of problems in the Middle East and how the Papacy could contribute in generating awareness in the wider world of potential peaceful solutions– as he had done when he visited Palestine earlier this year. If only he could visit the refugee camps at the Syrian border and experience the tragedy of fleeing people who come from diverse religious backgrounds. This forthcoming visit could also contribute to more mutual understanding between Muslims and Christians especially in the post 9/11 era and improving the project of Alliance of Civilization initiated by the Turkish and Spanish governments.