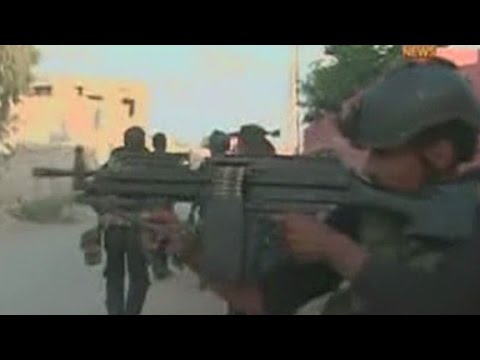 By Mustafa Habib | Baghdad | via Niqash.org —

Shiite militias are making inroads into the mainly Sunni province of Anbar. Previously Anbar’s Sunni tribes have not allowed the controversial militia groups in but now one tribe has invited them to help. Things are becoming ever more complex in Anbar and the arrival of US troops, who, it seems, will be staying at the same base as the Iran-sponsored militias, are complicating things further.

Last week, hundreds of members of Iraq’s Shiite Muslim militias arrived at a military base in the province of Anbar. Up until now the militias – who are not regular Iraqi army but who share the army’s goal of fighting the Sunni Muslim extremist group known as the Islamic State – have confined their activities to areas bordering Baghdad and Fallujah. Their mission seems to have been to protect Baghdad if the Iraqi army, plagued by low morale, corruption and lack of equipment, cannot.

But the Shiite Muslim militias are controversial, not least because they’re not official representatives of the Iraqi government. While they know how to fight and have achieved some important victories recently, many are also backed by Iran and most recently, there have been reports that Shiite Muslim militias have been terrorising the Sunni Muslim populations in areas they control – that is, engaging in their own sectarian cleansing campaigns, in a similar way to what the Islamic State group is doing.

No wonder then, that many Sunni Muslim tribes say they won’t support the Iraqi government until the Shiite militias are withdrawn; they see them as an occupying force. The Sunni Muslim people of Anbar feel this way in particular – they have very strong feelings about Shiite Muslim fighters being in their area.

The Badr forces are headed by Hadi al-Amiri, whom Foreign Policy magazine recently described as “unabashedly pro-Iranian” and “focused on building up his network of Shiite loyalists rather than reconciling with his Sunni enemies”. The Badr forces themselves became infamous during Iraq’s most troubled period of inter-sectarian violence for their brutal tactics.

“In addition there were 200 members of the Peace Brigades that also arrived to participate in an attack on Heet, which is currently controlled by the IS group,” the officer said. The Peace Brigades are another Shiite Muslim militia, an offshoot of the huge Mahdi army headed by the cleric Muqtada al-Sadr.

Apparently the reason that the Shiite Muslim militias continue to arrive in Anbar is thanks to the al-Bu Nimr tribe. The Islamic State group has killed or detained hundreds of members of the tribe because the tribe has supported the Iraqi government against them. Desperate for help, the al-Bu Nimr elders asked for aid from the Shiite Muslim militias.

Despite the fact that some have suggested the alliance between Sunni tribal fighters, Shiite militias and the Iraqi army could prove a successful model of sectarian unity for future campaigns against the IS group, the issue remains a troubling one for many Anbar locals.

Tribal heads elsewhere in the province have called meetings with the al-Bu Nimr leaders because the majority of Anbar’s tribes, who are Sunni, have not allowed the Shiite Muslim militias into the province. The tribes hate these militias as much as, and possibly more than, the IS group itself.

“Most of the tribes in Anbar as well as Sunni Muslim militias like the Islamic Army in Iraq, the Mujahideen Army and the 1920s Revolution Brigades, are strongly opposed to what the al-Bu Nimr people did,” one of Anbar’s tribal leaders, Naseer al-Mohammedi, told NIQASH.

Most of the factions opposed to the al-Bu Nimr tribe’s invitation to the Shiite militias are those who have expressed an intention to remain neutral in the conflict. They will protect their own territory, they say, and they will defend it if attacked. But they won’t support the IS group and nor will they support the Iraqi government, which they mistrust.

At the same time as Shiite militias have entered Anbar, reports indicate that at least some of the 1,500 US military advisers sent to Iraq by US President, Barack Obama, will also be headed here – and possibly to the same Ain al-Asad airbase. Which means that the Iran-backed Shiite Muslim militias must be interacting with the Americans.

Some analysts have suggested that there is now a race on between the US and Iran to see who can wield the most influence on the ground in Iraq – and if it isn’t a race, then it is certainly cooperation, whether tacit or implicit.

Shiite Muslim militias have gained some important victories recently, most notably in Tikrit and Jurf al-Sakhar. On the other hand, much of the action against the IS group has only been possible because of the air cover provided by the US-led international alliance.

The US has also put in a lot of work trying to win the support of Sunni Muslim tribes in the Anbar province – this is something Iran, being a Shiite Muslim-led theocracy, cannot do.

Information from inside Iraq’s security forces says that there are now a number of tribes working directly with Washington, especially on intelligence: their information is behind the success of US air strikes on the IS group.