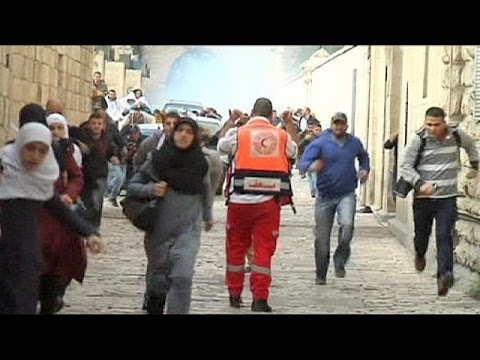 JERUSALEM (Ma’an) — Dozens of Palestinians suffered tear-gas inhalation and several others were injured by stun grenades, shrapnel and rubber-coated steel bullets during clashes in the Al-Aqsa mosque compound area on Wednesday, an official said.

Two were injured in the eye, and 32 with stun grenades, shrapnel and rubber-coated steel bullets in addition to many who suffered severe gas inhalation.

Three Palestinian members of Israel’s Knesset, Hanin Zoabi, Talab Abu Arrar and Ibrahim Sarsour, were able to enter the mosque during the closure and clashes.

Israeli soldiers neared the Al-Qabali mosque inside the compound as they fired stun grenades and tear-gas bombs inside, the director of the Al-Aqsa Mosque, Sheikh Omar al-Kiswani, said.

He said that a fire erupted inside the muezzin’s hall and cables and speakers were also burned and damaged.

Soldiers “deliberately” threw holy books on the floor, he alleged.

Israeli forces detained Tareq al-Hashlamon, an employee of the Islamic endowment department, after assaulting him inside Al-Aqsa, along with another endowment employee identified as Hussam Seder and three Palestinians.

Four Palestinians were also detained, one of them a minor. Two others were identified as Omar al-Kilani and Amin Qirsh.

Meanwhile, Jordan recalled its ambassador to Israel over the violence.

The clashes came amid continued tensions over right-wing Jewish demands to be able to pray inside the compound despite being off-limits in mainstream Judaism, in addition to the expansion of Israeli settlement building in Palestinian East Jerusalem.

Earlier, a police spokeswoman said that “Dozens of masked protesters threw stones and firecrackers at security forces who then entered the Temple Mount and pushed the demonstrators back inside the mosque.”

Because al-Qaeda and its fellow travelers do not speak in the language of Palestinian nationalism, it has been possible for certain quarters to obscure to the US public that they are absolutely manically fixated on the Israeli occupation of Jerusalem. This is what Bin Laden meant way back in the 1990s when he denounced the foreign military occupation of “the three holy cities.” Here is what Bin Laden wrote in 1998 when he declared war on the US:

‘ Third, if the Americans’ aims behind these wars are religious and economic, the aim is also to serve the Jews’ petty state and divert attention from its occupation of Jerusalem and murder of Muslims there. The best proof of this is their eagerness to destroy Iraq, the strongest neighboring Arab state, and their endeavor to fragment all the states of the region such as Iraq, Saudi Arabia, Egypt, and Sudan into paper statelets and through their disunion and weakness to guarantee Israel’s survival and the continuation of the brutal crusade occupation of the Peninsula. ‘

If this is a big part of what is driving the radical Muslim fundamentalists’ violence, then Sharon’s announcement on Sunday is guaranteed to produce a terrorist strike. If what Sharon is doing were the right thing, morally and politically, then he should do it anyway and we’ll just soldier on against the terrorists. But it is wrong in the first place, wrong morally, and wrong in international law and an insult to the United States in completely departing from the roadmap.

How obsessed Bin Laden & company are with what goes on in Palestine is obvious, as I said last week, in the 9/11 commission report:

‘ According to KSM [Khalid Shaikh Muhammad], Bin Ladin had been urging him to advance the date of the attacks. In 2000, for instance, KSM remembers Bin Ladin pushing him to launch the attacks amid the controversy after then-Israeli opposition party leader Ariel Sharon’s visit to the Temple Mount in Jerusalem. KSM claims Bin Ladin told him it would be enough for the hijackers simply to down planes rather than crash them into specific targets. KSM says he resisted the pressure.

KSM claims to have faced similar pressure twice more in 2001.According to him, Bin Ladin wanted the operation carried out on May 12, 2001, seven months to the day after the Cole bombing. KSM adds that the 9/11 attacks had originally been envisioned for May 2001. The second time he was urged to launch the attacks early was in June or July 2001, supposedly after Bin Ladin learned from the media that Sharon would be visiting the White House. On both occasions KSM resisted, asserting that the hijacking teams were not ready. Bin Ladin pressed particularly strongly for the latter date in two letters stressing the need to attack early.The second letter reportedly was delivered by Bin Ladin’s son-in-law,Aws al Madani. ‘

That is why our press and politicians do us an enormous disservice by not putting the Israeli announcement about the Jerusalem Barrier on the front page. This sort of action is a big part of what is driving the terrorists (and of course Sharon himself is a sort of state-backed terrorist anyway). The newspapers and television news departments should be telling us when we are about to be in the cross-fire between the aggressive, expansionist, proto-fascist Likud Coalition and the paranoid, murderous, violent al-Qaeda and its offshoots.