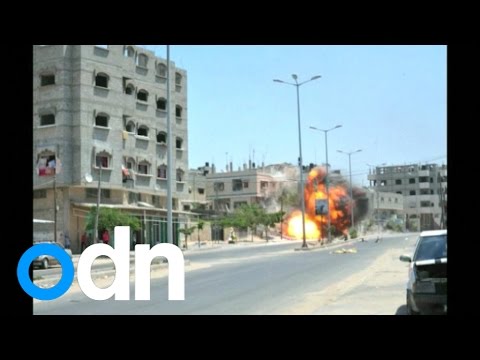 Critics say it is “shameful” that a high-ranking U.S. military official suggested the Pentagon can learn lessons from Israel’s 50-day attack on Gaza this summer.

Dempsey told an audience at the Carnegie Council for Ethics in International Affairs: “We sent a team of senior officers and non-commissioned officers over to work with the IDF to get the lessons from that particular operation in Gaza.” He referred to the group of officers as the “lessons learned team.”

But Ramah Kudaimi of the U.S. Campaign to End the Israeli Occupation said Israel’s tactics should not be replicated.

“It is very disturbing and shameful that U.S. military commanders believe that what Israel did in Gaza is something to be applauded,” Kudaimi told Common Dreams. “Five hundred dead children does not seem to be evidence that Israel was trying to not kill civilians. The seven-year siege on Gaza is not a policy to avoid civilian suffering.”

Israel’s recent seven-week military assault on Gaza killed at least 2,194 Palestinians, at least 75 percent of them civilians and over 500 of them children.

“At least 80 percent of the 100,000 Palestinian homes damaged or destroyed were refugee homes,” the United Nations Relief and Works Agency reports.

The offensive damaged or destroyed over half of Gaza’s hospitals and health centers at a time when more than 11,000 were wounded, a UNRWA and World Health Organization joint investigation found.

Israel struck six UN schools sheltering Palestinians, including in cases where exact coordinates of the shelters were formally submitted by UNRWA to the Isreali military. These strikes alone killed at least 47 people and wounded hundreds.

“It is very despicable that the U.S. continues to white-wash Israeli crimes while funding them through military aid,” said Kudaimi. “Dempsey’s statements are not shocking. Anyone who follows U.S. military policy, knows they too have problematic definitions of protecting civilians.”