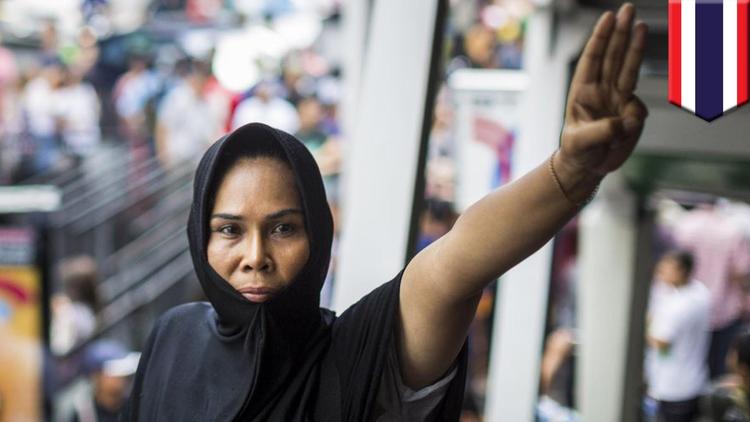 [Taiwan Animators (TomoNews)] “I’m sure you remember this touching scene from ‘Hunger Games: Catching Fire’ where Katniss shows her resolve and will to fight after her friend was killed. She turns to the camera and puts up her hand with the first three fingers outstretched in an act of resolve and defiance.

That three finger salute, symbolizing gratitude, admiration and farewell, has become a symbol for those in Thailand who disapprove of the military takeover of the government this past summer after months of protests.

Just today, five students decided they had enough of Prime Minister (and still kinda general of everything) Prayut Chan-O Cha’s speech in Khon Khan, a city in northeastern Thailand. The students took off their jackets revealing shirts that read simply, “No Coup” and turned their backs on the Prime Minister while giving the salute.

Of course, Prayut quickly had them detained, and they were most likely hauled off to a military camp for “re-education.”

Speaking of which, did you know that having outdoor picnics while reading popular literature is also “deeply frowned upon” as well in Thailand? The military claims they’re only looking out for the citizen’s greater happiness.

I wonder if they’d “re-educate” some Girl Scouts, though. They do that salute thing and they have cookies too. Because nothing says ‘rebellion’ like a plate full of Do-See-Dos given to you by a cute little girl.”