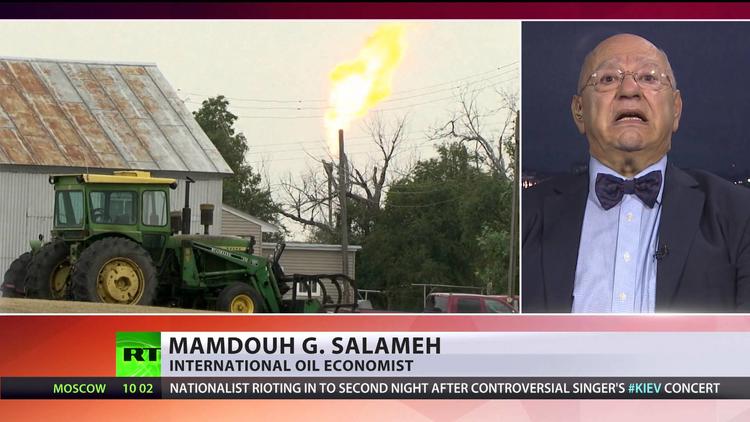 It is clear that among the major losers in the fall in the price of Brent crude petroleum from $115 a barrel last summer to about $75 a barrel today are Russia, Iraq and Iran. Petroleum sales are 50% of Russia’s income, and are also central for Iran and Iraq.

But the big loser will likely be shale oil producers and prospectors in the US, who probably cannot make a profit if the price falls into the 60s.

The cause of the fall, by $40 a barrel, in petroleum prices since last summer is almost completely on the demand side. Asian economies, especially China, are dramatically slowing, and won’t be requiring as much petroleum to fuel trucks, trains and cars to deliver people and goods around the country. Most petroleum is used to fuel transport. Some is used for heating or cooling, as in Saudi Arabia and Hawaii, but that practice is relatively rare. US journalists seem to feel it obligatory to mention US shale oil production as a contributor to the price fall, since prices are a matter of supply and demand, and US supply has increased by a couple million barrels a day. But frankly that is a minor increase in world terms– global production is roughly 90 million barrels a day. Between Iran, Iraq (Kirkuk), Libya and Syria, enough oil has gone out of production to more than offset the additional American oil. It isn’t that there is more oil being pumped, it is that the world doesn’t want it as much because of cooling economies.

The Russian and Iranian governments are said to be panicking , because both need high prices to support their bloated government budgets and popular subsidies.

The value of the Russian ruble against the dollar has fallen 19% this fall.

The Iraqi government of Haydar al-Abadi will also have much less income with which to fight Daesh/ ISIL.

While the fall in petroleum prices is hurting government budgets in Russia and Iran, ironically it may actually help workers. Iran’s economy has improved in the past year despite US sanctions on Iranian oil sales, which have reduced exports from 2.5 mn bpd to 1.5 mn bpd in the past three years.

One silver lining for the Iranian economy of lower oil prices is that they will weaken the value of the riyal and make Iranian manufactures, handicrafts and agricultural produce cheaper to export. This development will benefit millions of Iranians. It is mainly the government, and recipients of government subsidies, who are hurt by the oil price fall.

Nor should it be assumed that reduced oil income will destabilize the ayatollahs in Tehran. Saddam Hussein in 1990s Iraq faced much more severe oil sanctions, and the price fell steeply in 1997, but the Iraqi Baath elite cushioned themselves and survived handsomely until George W. Bush invaded and overthrew them.

Russian made goods may also benefit over time from the lower ruble and a smaller oil income. Putin may become less powerful, but Russian factory workers may see a rise in income because more in the global South can afford to import their products.

As for North Dakota and other fracking states, some of their production may continue because of sunk costs in drilling and infrastructure. But it is likely that new investment in fracked oil will dry up for the next year or so.

Saudi Arabia did not cause the oil price fall, though since 2011 it has been flooding the market to offset the decrease in Iranian exports because of US sanctions. Riyadh, however, is the main geopolitical winner here, which is why the Saudis stopped the Organization of Petroleum Exporting Countries from reducing country production quotas. (That step would have reduced supply and put up prices). As it is, the Saudis can afford to wait as fracked oil is driven out of the market because too expensive, so that they regain their market share.

The Saudis must enjoy punishing Iran and Russia for defying them by propping up the Bashar al-Assad regime in Damascus and the Da’wa Shiite regime in Baghdad.

The lower oil prices are unlikely to hurt electric vehicles or plug-in hybrids, because they are still such a tiny part of the auto market that there is room for sales to grow a great deal. And, even if US prices average out at $2.70 a gallon, that can’t actually compete with free fuel, which is what a lot of electric auto owners get, via their rooftop solar panels or subsidized parking in cities or at work.

Natural gas and petroleum are dead men walking– they are worthless but the markets just haven’t realized it yet. By 2016, solar and wind will be grid parity everywhere in the US with coal and natural gas for heating and cooling buildings. That means it will be as cheap or cheaper to build a solar or wind facility as to build a new coal plant (the latter won’t likely even be allowed because of anti-pollution laws finally being implemented by the Obama administration).

Because it is harder and more expensive to replace petroleum for transportation than to replace coal and natural gas for heating buildings, oil may have a longer run than the other hydrocarbons. But as auto battery costs come down and as more and more buildings have solar panels or are supplied with electricity by wind, gasoline-driven autos will also, over the next 10-15 years, become uneconomical. (Not to mention that Asian demand will revive and even possibly go into overdrive, as India, e.g. turns to automobiles from bicycles.)

That is, Saudi Arabia, Iran, Russia and North Dakota are all up the creek in the medium term. But for the latter three, which have complex economies and in the case of Russia and Iran, sizeable populations, the economic benefit of inexpensive renewable electriicity will likely outweigh the loss of oil income. Everywhere, renewables are likely to put money and power in the pockets of ordinary people and workers, and may spell a weakening of the oil-based rentier state.

Saudi Arabia should enjoy its brief moment of triumph. Its business model is actually a dinosaur, as is that of the rivals it is punishing.