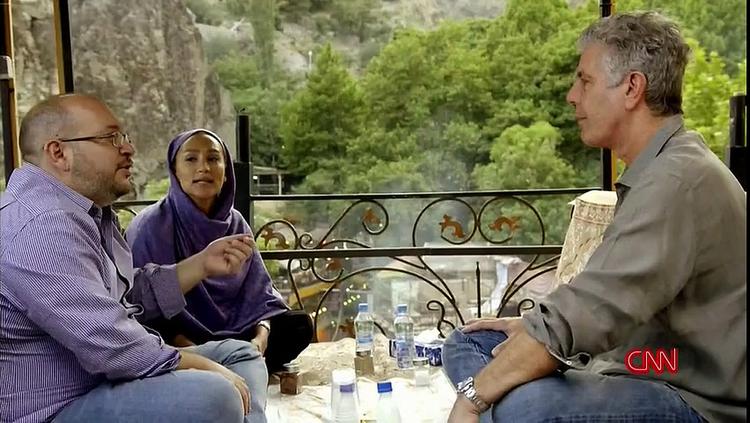 “By the end of this hour I will be seen by many as a terrorist sympathizer, a Zionist tool, a self-hating Jew, an apologist for American imperialism, an orientalist, socialist, fascist, CIA agent, and worse,” the inimitable Anthony Bourdain introduced his vital Gaza/West Bank episode

Bourdain’s take on the Middle East for his television travel programmes is learned and dynamic, nuanced and empathetic. While the big-hearted New Yorker was on assignment in Madagascar, I interviewed him about his recent, lovely episode on Iran and his formative Beirut experience. Bourdain speaks about Iran’s exhilarations and complexities, imprisoned Iranian journalist Jason Rezaian, and falling in love with the Middle East in Lebanon during 2006.

Bourdain: “What makes Iran special is the sheer difficulty of experiencing it as an American– and of understanding the complexities, the history, the context, the contradictions–and the ever changing political realities. It is a beautiful country, with an ancient and very rich culture that seems often to be at odds with its religious leadership. The people you meet in the street are overwhelmingly welcoming.

“Nowhere else I’ve been has the disconnect been so extreme between what one sees and feels from the people and what one sees and hears from the government. Iranians, however they feel about their government, tend to be proud, and opinionated. And their food is extraordinary. Fesenjan, Persian Pomegranate Chicken, is but one example.

“Iranian food is hearty and unpretentious. Food is expensive in Iran. Sanctions have bitten deep. Everyday Iranians feel it, not least in what they can put on their table. This in a culture where custom demands you always prepare and offer more good food than can possibly be consumed.

“Iran is deeply conflicted, exhilarating, heartbreaking. One of the exhilarations is Iranians’ eagerness to communicate, to express themselves, to show the world more about themselves than what we see on the news. An eagerness to be proud, to have fun is something you feel palpably in Tehran. The hospitality from strangers is extraordinary.

“I asked one host what he thought Americans would think of the episode. “They will start coming,” he laughed. I think simply seeing a few ordinary Iranians, doing ordinary things, is a departure from the usual footage of angry ayatollahs.  That alone will shock many. Shamefully, many, many people labour under the most simplistic of misimpressions: Iranians are not Arabs. Iran is not a desert. Not everyone is a fundamentalist. Iran even looks much different than how it does in films.

“Iran was a blank slate for us. We expected our expectations to be upended at every turn. So, unusually for us, we did not have a design or film style or pre-existing reference in mind. I always think about George Orwell. His essays are an inspiration.

“People everywhere I go, I have found, are overwhelmingly, good people, usually doing the best they can, often under very difficult circumstances. It’s worth remembering, never forgetting, that in Iran, there is no freedom of speech. That access to the Internet is restricted, and that having an opinion–or even appearing to have an opinion–can put you in jail. The reality of Iran is that what is permitted yesterday might very well be an offense today. The limits of permissible everyday behaviour, dress, expression, are being tested every minute.

“Iran’s contradictions and its’ perils are extraordinary, too. You can, as our friend, Washington Post correspondent Jason Rezaian found out, find yourself in prison for absolutely no reason at all. Total innocence is no assurance of safety. What we can do to help Jason is to keep his name and his situation in the public eye.  Beyond that, I am open to suggestion.  It is a very delicate line to walk.

“The Milad Tower, 1000 ft high, provides a good vantage point for looking over Tehran, considering it in all its complexity.

“Isfahan is also well worth a trip. Iran’s third largest city is about 200 miles south of the capital.  Its Islamic architecture is beautiful.

“Going to Lebanon in 2006 was when I first fell in love with the Middle East. Everyone should be required to spend time in Beirut before running their mouth about the Middle East. Until you spend time navigating those waters, you really don’t know anything.

“Beirut is as different from Tehran as anyplace could be. Talk about contradictions? You can be rousted by Hezbollah one minute and be drinking Mojitos by a pool surrounded by girls in bikinis ten minutes later. It’s everything good and bad in the world in one gorgeous, mixed up, beleaguered, effortlessly cool, endlessly afflicted city.  Our whole crew, even those of us stuck there during the 2006 war, love the place. It even smells magical. Deeper, more intractable problems can hardly be imagined. But Beirut and Beirutis stand alone as must be experienced.

“Experiencing Beirut and Iran makes me hope we can do episodes on Syria, Afghanistan, Iraq and Yemen.

Anthony Bourdain hosts the wonderful travel programme Parts Unknown on CNN. Alexander Bisley is a political and cultural freelancer for publications including the Guardian

CNN: “Anthony Bourdain on Iran: Not what I expected”