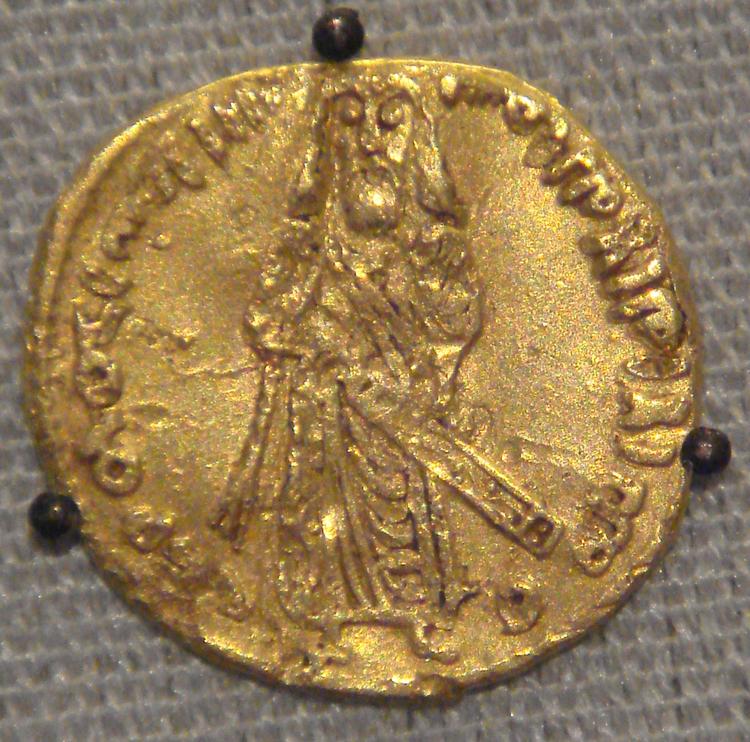 By Tareq A. Ramadan

It has been recently reported by Daesh (what most Arabs call the self-styled “Islamic State Group” or IS) that it will be producing and circulating its own coinage in an attempt to purportedly offset the popularity and usage of secular, Western currencies which they dub the “oppressor’s money” [1]. For Daesh, the issuing of its own coins will, allegedly, be an extension of a policy also aimed at preventing usury (i.e. charging interest) which is a practice forbidden under Islamic law.

According to some of the images released by the group, the denominations and compositions of the coins include both one and five ‘dinar’ pieces struck in gold, one, five, and ten ‘dirham’ coins struck in silver, and both a ten and twenty ‘fils’ struck in copper. The terms dinar, dirham, and fils are all Arabic renditions of ancient Greek terms (denarion, drachma, follis) employed by the Byzantines for their currencies and later adopted by the first hereditary Muslim caliphate under the Umayyads in the latter half of the seventh century. As a numismatist, myself, I have been particularly interested in the genesis and development of early Islamic coinage from the seventh century and years ago published a short piece on, quite possibly, one of the earliest ‘Islamic’-era coins ever to bear the term ‘fils’ (in Arabic) which appeared on a copper coin found in modern-day northern Jordan, an area not that was not particularly far from the Umayyad political epicenter of Damascus in today’s war-torn Syria [2].

While vastly different from the earliest Islamic coins in terms of iconography, some of the symbols slated to be struck on Daesh coins reproduce themes familiar to Middle Easterners. The various imagery and themes depicted on the coins include an ear of wheat, palm trees, the Al-Aqsa mosque (of Jerusalem), a map of the world, a Damascus minaret and mosque facade, a crescent moon, and a circular shield along with a spear (and which convey certain historical, religious, and political meanings). The coins contain no English words, instead bearing all-Arabic inscriptions that collectively read “The Islamic State” at the top of the obverse, the monetary amount (e.g. one dinar) in the middle (with the number of grams below it), and a phrase that roughly translates as “The Caliphate based on the Prophet’s guidelines” (‘Khilafa ‘ala minhaj al nubuwwa’ in Arabic) on the bottom. The reverse side of the coins contain the aforementioned images, the numerical denomination in Arabic, along with an Islamic era date of 1436 (A.H. or ‘After Hijra’ the 622 CE date that marks the beginning of the Muslim lunar-based calendar) which currently coincides with 2014.

Interestingly, Daesh adopted the very monetary units/denominations introduced by Islam’s first political dynasty, the Umayyads- a mostly detested group of leaders often accused of political opportunism and of illegitimately succeeding the Prophet Muhammad and the first four ‘Rightly-Guided Caliphs’ (political successors)who came immediately after him. The Umayyads (political and tribal elites from Mecca who created a vast and expansive empire that ruled from Morocco to India between 661-750 CE and Spain until 1031 CE) represent the first Muslim polity to strike coins in modern-day Iraq and Syria, parts of which Daesh dominates today. The Umayyads, unlike Daesh, designed coins aimed at appeasing the local non-Muslim populations and therefore bore Christian (and to a lesser extent Jewish) imagery that typically (for the first few decades of their rule) included depictions of Byzantine emperors/figures holding crosses while initially containing all-Greek legends. The early Arab-Muslim leaders were catering to an overwhelmingly non-Christian constituency whose support they absolutely needed in order to maintain authority in the newly-conquered Near East. Daesh, however, is trying to appeal to a different crowd-a mainly young, idealistic Muslim one and have been using the internet (twitter, forums, etc.) as a conduit for promoting popular religious phrases, expressions, and symbols in hopes to paint themselves as legitimate representatives of Islam’s seemingly native and authentic political construct known as the ‘caliphate.’

To many (mainly Sunni) Muslims, the caliphate represents an indigenous Muslim political institution and provides a sense of nostalgia for those who grew up hearing or reading about the often romanticized Classical and Golden Ages of Muslim rule when caliphates were the dominant political order in a united Muslim world (although in reality, Muslim political unity was fractured by 750 CE and during the Middle Period between 950-1400, dozens of Muslim dynasties, sultanates, caliphates, khanates, and emirates rose to power, fought one another, and collapsed regularly). For many of its Muslim subjects, the Ottoman Empire (1299-1922), regarded as the last Islamic caliphate, served as the protector of Muslim autonomy and independence in a world that saw the expansion of European colonialism and imperialism encroach upon much of the Muslim World. Many Muslims around the world today share similar sentiments about establishing and preserving ‘Muslim’ sovereignty given that Western powers have engaged in military ventures in several Muslim-majority countries ranging from Sudan, Libya, and Iraq to Syria, Yemen, and Pakistan and who have become increasingly suspicious of both European and American ambitions in their parts of the world.

Highlighting these sentiments are the results of a poll conducted by WorldPublicOpinion.org (in conjunction with the University of Maryland’s START Consortium) between December 2006 and February 2007 and which spanned four Muslim-majority countries (Egypt, Indonesia, Morocco, and Pakistan). When asked about U.S. foreign policy goals, the polls revealed that “Large majorities across all four countries believe the United States seeks to “weaken and divide the Islamic world.” On average 79 percent say they perceive this as a US goal, ranging from 73 percent in Indonesia and Pakistan to 92 percent in Egypt.” Unsurprisingly, given these attitudes, many of those polled across all four countries, in fact two-thirds of respondents, consequently preferred the establishment of a caliphate or a cohesive, single, united Islamic state [3].

Daesh knows its audience well and has engaged in a social media blitz aimed at banking on the grievances of young Muslims around the world while creating a sense of appeal for those who have idealized the caliphate as the only political alternative to the fragmented Muslim world’s corrupt regimes or, in some cases, what they regard as nations with (in some cases, they argue, Western-supported) governments hostile to Islam and Muslims. Considering that Daesh has no regionally or universally recognized territorially demarcated boundaries highlighting the extent or geographic parameters of their political authority/rule, they do control large swaths of Syria and Iraq as well as a population that may include more than ten million people. However, they probably do not have the technical expertise, enough raw materials, or the financial and economic know-how to successfully launch an independent currency that will be successful (or even legal) outside of Daesh-controlled territories. Their leadership under the self-styled ‘Caliph’ Abu Bakr Al-Baghdadi (whose rise to power may have been facilitated by former members of Saddam Hussein’s Ba’ath Party [4]) must know this, but is probably hoping that by producing, releasing and circulating coinage- a series of practices almost always tied to centralized state institutions, that it provides a semblance of permanence and legitimacy in the minds of some mainly young, idealistic Muslims fascinated by the idea and all of the trappings of a modern-day caliphate.

More than anything, the coins, if produced, will serve mostly as propaganda tools that provide the illusion of stability, sovereignty, and statehood in an attempt to appeal to potential recruits.

Tareq A. Ramadan is a PhD Candidate and numismatist in the U.S. specializing in Arab and Islamic Studies and early Islamic archaeology and teaches courses on contemporary Arab society, Islamic Civilization, and Middle East political history.

[2] Tareq Ramadan. AN ARAB-BYZANTINE STANDING IMPERIAL FIGURE COIN FROM JUNDAL-URDUN INSCRIBED WITH THE WORD “FILS”. Journal of the Oriental Numismatic Society, No. 202, Spring 2010 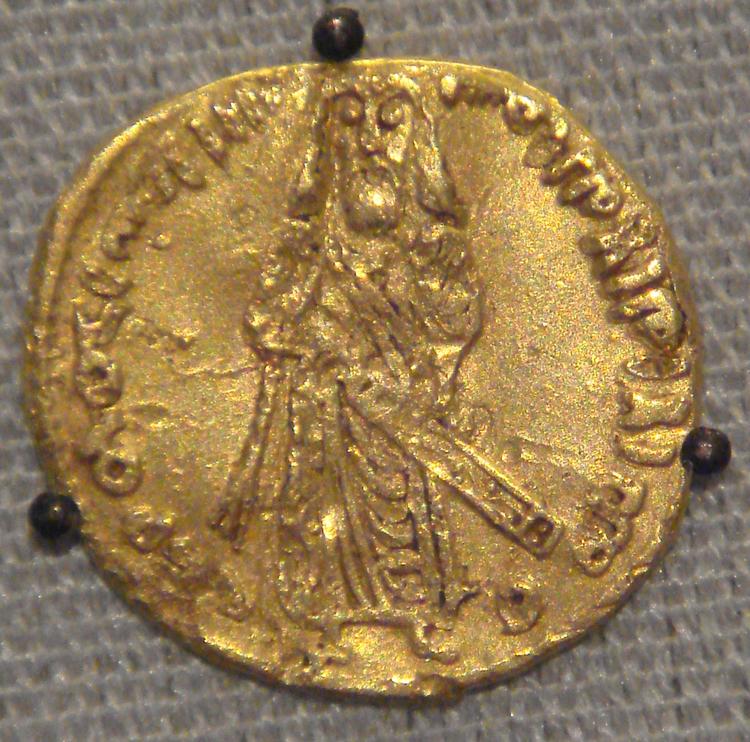 An 8th century coin from the Umayyad Caliphate depicting an early Arab ruler.