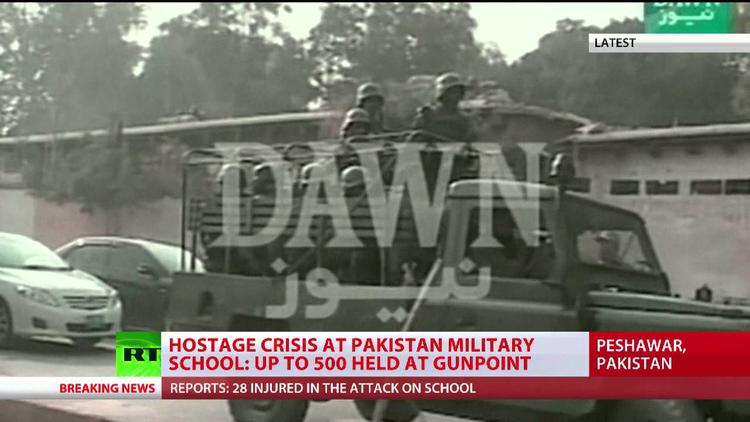 On Tuesday, six members of the Movement of Pakistani Taliban (Tehrik-i Taliban Pakistan or TTP) invaded a school for children run by the Pakistani army in Peshawar

The Pakistani military counter-attacked, with early reports of dozens killed and wounded in the cross fire. Some of the Taliban were wearing suicide bomb vests, and a loud explosion was heard from one of the school buildings.

Unlike the hostage-taking in Australia, which was just a tragedy produced by a lone nut-job, the attack in Peshawar has geopolitical implications and really is the work of persons organized to pressure civilians on policy by routinely blowing them up–the very definition of terrorism.

The Pakistani “Taliban” are a little bit of a misnomer. The word means ‘seminary student,’ and many of those Afghans who flocked to Mulla Omar in the late 1990s actually studied Muslim law and other disciplines. But the so-called Pakistani Taliban are just uneducated men from the Mahsoud tribe in southern Waziristan, an agency of the Federally Administered Tribal Areas [FATA]. People in Waziristan are Pushtuns, an ethnic group with its own language. Most Taliban derive from that ethnicity. Pakistan’s dominant ethnic group is the Punjabis.

Some of the tribesmen of Mahsoud only declared themselves members of the “Pakistani Taliban” in the early zeroes, whereas the Afghan Taliban went back to the 1990s. Many observers believe that the TTP or Pakistani Taliban were behind the assassination on Dec. 27, 2007, of former prime minister Benazir Bhutto. Also in North Waziristan is the Haqqani group of terrorists, who had been with the US against the Soviet Union but in 2001 turned on the US as occupiers.

The ambiguities of FATA are enough for a hundred John LeCarre novels. The Pakistani Inter-Services Intelligence is accused of having used or wanted to use the militant Pakistani Taliban and Haqqani group for its own purposes, laying down a marker on the future of Afghanistan.

In 2009, soon after he came to office, President Barack Obama twisted the arm of then Pakistani president Asaf Ali Zardari (the widower of Benazir Bhutto). He succeeded in getting Zardari to launch a major operation against the Pakistani Taliban for the first time. The Pakistani military targeted many of the Mahsoud in South Waziristan, driving others to North Waziristan. The campaign secured some urban areas.

Since July of this year, the Pakistani air force has been bombing positions of the TTP or Pakistani Taliban in North Waziristan. The more aggressive policy was adopted by Prime Minsiter Nawaz Sharif of the Muslim League. He appears to be trying to build bridges to Afghanistan’s president Ashraf Ghani.

It is amazing that the US finally got what it wanted, a Pakistani government willing to send fighter jets to bomb the Pakistani Taliban. But that there has been almost no television coverage of this sea change.

*North* Waziristan had always been protected by military intelligence and so had become a haven for al-Qaeda offshoots. But in the past 6 months Pakistani army troops have killed nearly 2000 fighters and deeply disrupted what is left of the Pakistani Taliban. The group that took over the school complains of the perfidy of the government’s bombing.

So this school attack was the Pakistani Taliban taking revenge for the government’s disruption of their terrorist activities. This is not a sign of strength but of weakness, and they lashed out at a soft target. They are facing a major defeat. That is its significance.