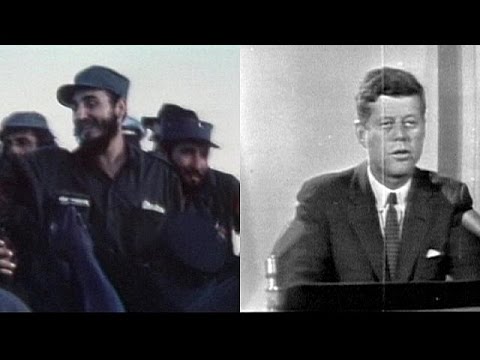 The US sanctions on Cuba were justified by their supporters with reference to the Communist government’s human rights record. That record, bad as it is, however, cannot explain the sanctions. They are rather pique that Cuba defied American hegemony and corporate domination. The sanctions have not overthrown the government of Fidel Castro. They have imposed some hardships on ordinary Cubans.

Let’s consider dictatorial countries with which the US has diplomatic relations; some of them are actually very warm friendships, despite all the arbitrary arrests, censorship, etc. Some of them are even Communist! With Cuba, it had to be personal.

1. Saudi Arabia is an absolute monarchy which doesn’t even allow political parties or any kind of public dissent.

“Saudi Arabia stepped up arrests, trials, and convictions of peaceful dissidents, and forcibly dispersed peaceful demonstrations by citizens in 2013. Authorities continued to violate the rights of 9 million Saudi women and girls and 9 million foreign workers. As in past years, authorities subjected thousands of people to unfair trials and arbitrary detention. In 2013, courts convicted seven human rights defenders and others for peaceful expression or assembly demanding political and human rights reforms.”

2. Zimbabwe. The US has diplomatic relations with the notoriously dictatorial government of Robert Mugabe in Zimbabwe and actually has given the country $400 million in humanitarian aid.

“Both the power-sharing government prior to August 2013 and the new administration have failed to amend repressive laws, such as the Access to Information and Protection of Privacy Act (AIPPA), the Public Order and Security Act (POSA), and the Criminal Law Codification and Reform Act, which severely curtail basic rights through vague defamation clauses and draconian penalties. Failure to amend or repeal these laws and to address the partisan conduct of the police severely limits the rights to freedom of association and assembly.

Sections of AIPPA and POSA that provide criminal penalties for defamation, or for undermining the authority of, or insulting the president, have routinely been used against journalists and human rights defenders. Police often misuse provisions of POSA to ban lawful public meetings and gatherings. Activists and journalists continue to be wrongly prosecuted and charged under these laws. For instance, on May 7, police arrested Dumisani Muleya, editor of the Zimbabwe Independent, and Owen Gagare, its chief reporter, following the publication of an article on the security forces. The two were detained for eight hours, then charged with “publishing or communicating false statements prejudicial to the State.” ”

3. Belarus, a small eastern European country with a population of 9.5 million, which never made the transition to democracy after the fall of the Soviet Union. We have an embassy in Minsk, though the post of ambassador is right now unfilled (there is a charge d’affaires).

Most media are state-controlled, and authorities harass the few independent journalists and outlets that remain. In 2013, police arrested 25 journalists as they covered public protests. Courts sentenced at least four to short-term detention following convictions on misdemeanor charges. The authorities frequently prohibit reporting on public marches and open court hearings.”

4. Sultanate of Brunei: The US has warm diplomatic relations and a US embassy there, despite its disregard for basic human rights

5. We actually have an embassy in Vietnam of all places: Human Rights Watch writes:

“The Vietnam government systematically suppresses freedom of expression, association, and peaceful assembly, and persecutes those who question government policies, expose official corruption, or call for democratic alternatives to one-party rule. Police harass and intimidate activists and their family members. Authorities arbitrarily arrest activists, hold them incommunicado for long periods without access to legal counsel or family visits, subject them to torture, and prosecute them in politically pliant courts that mete out long prison sentences for violating vaguely worded national security laws.

In 2012, police used excessive force in response to public protests over evictions, confiscation of land, and police brutality.

Land confiscation continues to be a flashpoint issue, with local farmers and villagers facing unjust confiscation of their lands by government officials and private sector projects. Those who resist face abuses from local authorities.”

If the US recognizes Vietnam and has an embassy there after all that happened between the two countries, it seems like a minor thing to have diplomatic relations with Cuba.