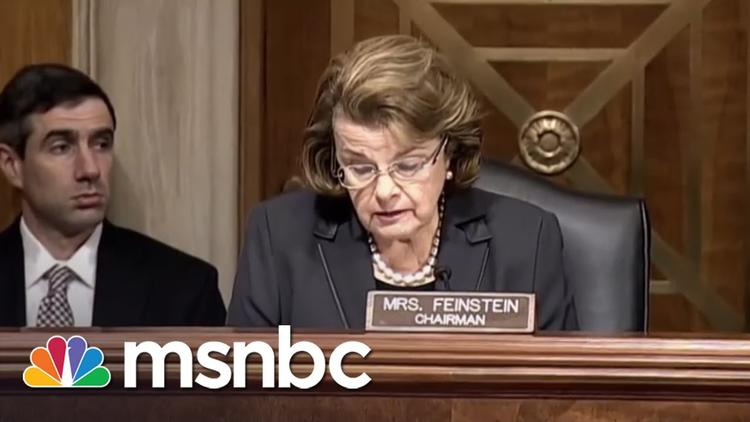 I have argued on many occasions that the language of patriotism and appeal to the Founding Fathers and the constitution must not be allowed to be appropriated by the political right wing in contemporary America, since for the most part right wing principles (privileging religion, exaltation of ‘whiteness’ over universal humanity, and preference for property rights over human rights) are diametrically opposed to the Enlightenment and Deist values of most of the framers of the Unites States.

We will likely hear these false appeals to an imaginary history a great deal with the release of the Senate report on CIA torture. It seems to me self-evident that most of the members of the Constitutional Convention would have voted to release the report and also would have been completely appalled at its contents.

The Bill of Rights of the US Constitution is full of prohibitions on torture, as part of a general 18th century Enlightenment turn against the practice. The French Encyclopedia and its authors had agitated in this direction.

Two types of torture were common during the lifetimes of the Founding Fathers. In France, the judiciary typically had arrestees tortured to make them confess their crime. This way of proceeding rather tilted the scales in the direction of conviction, but against justice. Pre-trial torture was abolished in France in 1780. But torture was still used after the conviction of the accused to make him identify his accomplices.

Thomas Jefferson excitedly wrote back to John Jay from Paris in 1788:

“On the 8th, a bed of justice was held at Versailles, wherein were enregistered the six ordinances which had been passed in Council, on the 1st of May, and which I now send you. . . . By these ordinances, 1, the criminal law is reformed . . . by substitution of an oath, instead of torture on the question préalable , which is used after condemnation, to make the prisoner discover his accomplices; (the torture abolished in 1780, was on the question préparatoire, previous to judgment, in order to make the prisoner accuse himself;) by allowing counsel to the prisoner for this defence; obligating the judges to specify in their judgments the offence for which he is condemned; and respiting execution a month, except in the case of sedition. This reformation is unquestionably good and within the ordinary legislative powers of the crown. That it should remain to be made at this day, proves that the monarch is the last person in his kingdom, who yields to the progress of philanthropy and civilization.”

Jefferson did not approve of torture of either sort.

The torture deployed by the US government in the Bush-Cheney era resembles that used in what the French called the “question préalable.” They were being asked to reveal accomplices and any further plots possibly being planned by those accomplices. The French crown would have argued before 1788 that for reasons of public security it was desirable to make the convicted criminal reveal his associates in crime, just as Bush-Cheney argued that the al-Qaeda murderers must be tortured into giving up confederates. But Jefferson was unpersuaded by such an argument. In fact, he felt that the king had gone on making it long past the time when rational persons were persuaded by it.

Bush-Cheney, in fact, look much more like pre-Enlightentment absolute monarchs in their theory of government. Louis XIV may not have said “I am the state,” but his prerogatives were vast, including arbitrary imprisonment and torture. Bush-Cheney, our very own sun kings, connived at creating a class of human beings to whom they could do as they pleased.

When the 5th amendment says of the accused person “nor shall be compelled in any criminal case to be a witness against himself” the word “compelled” is referring to the previous practice of judicial torture of the accused. Accused persons who “take the fifth” are thus exercising a right not to be tortured by the government into confessing to something they may or may not have done.

Likewise, the 8th Amendment, “Excessive bail shall not be required, nor excessive fines imposed, nor cruel and unusual punishments inflicted.” is intended to forbid post-sentencing torture.

The 8th Amendment was pushed for by Patrick Henry and George Mason precisely because they were afraid that the English move away from torture might be reversed by a Federal government that ruled in the manner of continental governments.

It was objected in the debate over the Bill of Rights that it could be ignored. George Mason thought that was a stupid reason not to enact it:

“Mr. Nicholas: . . . But the gentleman says that, by this Constitution, they have power to make laws to define crimes and prescribe punishments; and that, consequently, we are not free from torture. . . . If we had no security against torture but our declaration of rights, we might be tortured to-morrow; for it has been repeatedly infringed and disregarded.

Mr. George Mason replied that the worthy gentleman was mistaken in his assertion that the bill of rights did not prohibit torture; for that one clause expressly provided that no man can give evidence against himself; and that the worthy gentleman must know that, in those countries where torture is used, evidence was extorted from the criminal himself. Another clause of the bill of rights provided that no cruel and unusual punishments shall be inflicted; therefore, torture was included in the prohibition.”

It was the insistence of Founding Fathers such as George Mason and Patrick Henry that resulted in the Bill of Rights being passed to constrain the otherwise absolute power of the Federal government. And one of their primary concerns was to abolish torture.

The 5th and the 8th amendments thus together forbid torture on the “question préparatoire” pre-trial confession under duress) and the question préalable (post-conviction torture).

That the Founding Fathers were against torture is not in question.

Fascists (that is what they are) who support torture will cavil. Is waterboarding torture? Is threatening to sodomize a man with a broomstick torture? Is menacing a prisoner with a pistol torture?

Patrick Henry’s discourse makes all this clear. He was concerned about the government doing anything to detract from the dignity of the English commoner, who had defied the Norman yoke and gained the right not to be coerced through pain into relinquishing liberties.

Fascists will argue that the Constitution does not apply to captured foreign prisoners of war, or that the prisoners were not even P.O.W.s, having been captured out of uniform.

But focusing on the category of the prisoner is contrary to the spirit of the founding fathers. Their question was, ‘what are the prerogatives of the state?’ And their answer was that the state does not have the prerogative to torture. It may not torture anyone, even a convicted murderer.

The framers of the Geneva Convention (to which the US is signatory) were, moreover, determined that all prisoners fall under some provision of international law. René Värk argues:

“the commentary to Article 45 (3) asserts that ‘a person of enemy nationality who is not entitled to prisoner-of-war status is, in principle, a civilian protected by the Fourth Convention, so that there are no gaps in protection’.*32 But, at the same time, it also observes that things are not always so straightforward in armed conflicts; for example, adversaries can have the same nationality, which renders the application of the Fourth Convention impossible, and there can arise numerous difficulties regarding the application of that convention. Thus, as the Fourth Convention is a safety net to persons who do not qualify for protection under the other three Geneva Conventions, Article 45 (3) serves yet again as a safety net for those who do not benefit from more favourable treatment in accordance with the Fourth Convention.”

Those who wish to create a category of persons who may be treated by the government with impunity are behaving as fascists like Franco did in the 1930s, who also typically created classes of persons to whom legal guarantees did not apply.

But if our discussion focuses on the Founding Fathers, it isn’t even necessary to look so closely at the Geneva Conventions.

Thomas Jefferson wrote in the Declaration of Independence, “We hold these truths to be self-evident, that all men are created equal, that they are endowed by their Creator with certain unalienable Rights, that among these are Life, Liberty and the pursuit of Happiness.”

The phrase “all men” means all persons of any nationality.