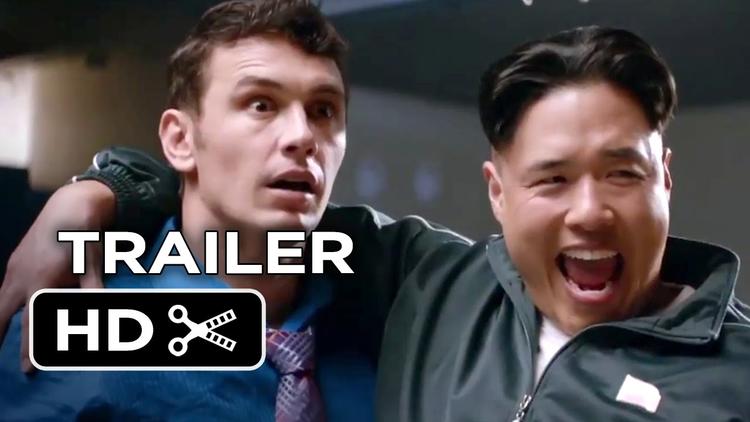 N.B.: Contains spoilers; if interested in the film, go see or stream it first and then read.

There has been a lot of blaming the victim in the commentary on Seth Rogan and Evan Goldberg’s controversial film, “The Interview” (2014). The premise, of an assassination plot against the North Korean dictator, has been called unseemly and it has been hinted around that trouble about it was foreseeable.

In fact, despite an unflattering depiction of the Central Intelligence Agency as manipulative and homicidal, the heart of the film isn’t about violent assassination at all. For all its juvenile potty humor and blue language, “The Interview” is an old-fashioned Hollywood piece of idealism. It is getting a 51% critics rating at Rotten Tomatoes, so let’s face it, it is a B movie, sort of an even more vulgar Harold and Kumar type of outing. But if, in the way of the structuralist critics who put aside questions of quality in favor of plot and theme, we consider the message here, it is one of ridicule for an extremely powerful and yet extremely absurd dictator and regime.

The rather fickle and volatile fictional protagonists, Dave Skylark (James Franco) and Aaron Rapoport (Seth Rogan) put on a TMZ-like entertainment show that involves shocking interviews with stars wanting to come clean about some foible. Once they are invited to North Korea and are recruited by Langley, they bounce around from disgust at the idea of the CIA assassination scheme to tepid commitment to conviction that a better way could be found than political murder to change North Korean politics.

The “assassination” they conduct is therefore an assassination of character, in a live television broadcast. In other words, they use the tools of television sensationalism and celebrity gossip to ambush and humiliate the guest, pushing him over the edge and revealing his true character– and so destroying him politically.

When I was young, American television and film had an unwritten code that the protagonist cannot casually murder someone, even a very bad guy. The good guy or gal could kill, but only in self-defense as a court of law would recognize it. That code long since went out the window, in a way I entirely disapprove of, since having supposed heroes act sadistically and murderously is a pollution of our national ethics.

Ironically, in a film about an assassination plot gone awry, when the protagonists do blow Kim Jong-Un away, it is in self-defense not only of themselves but of the world. In this way, again, the film exemplifies an older Hollywood sensibility. The good guys are good guys in the end, they prefer non-violent means, and commit violence only when forced to deploy it to save lives.

Whether or not the North Korean government was behind the hacking of Sony Pictures and the threats against the theaters that showed the film, it does seem incontestable that Pyongyang is seized by a cold fury at its making.

Last summer the government said, “The US authorities should take immediate and appropriate action to ban the production and distribution of the film, otherwise it will be fully responsible for encouraging and sponsoring terrorism … [and] involves insulting and assassinating the supreme leadership… To allow the production and distribution of such a film on the assassination of an incumbent head of a sovereign state should be regarded as the most undisguised sponsoring of terrorism as well as an act of war.” Pyongyang threatened a “resolute and merciless response.”

The North Korean government, moreover, was likely much more afraid of the ridicule to which Kim Jong-Un is subjected in this film than of the silly assassination plot. That is, the charge of “insulting” should be taken more seriously than that of celluloid terrorism (no, that’s not a thing). Over and over again in recent years we have seen dictators fall, in part because their mystique was pierced and the people lost their fear. Muammar Gaddafi, Hosni Mubarak and Tunisia’s Zine El Abidine Ben Ali all got that treatment. All of them were deposed by people suddenly more derisive of them than afraid of them. The fright at being laughed at on social media is a much bigger threat than mere imaginary death fantasies aimed at the supreme leader.

I think it is a great good thing that Sony decided to allow the film to be streamed at its own dedicated site, and at Google Play, Youtube, and on X-Box. I watched it on my laptop at Google Play for $5.99 and it was all very convenient, if a little awkward for a middle-aged intellectual to be subjected to the endless stream of poor taste here. Alas, it is a frat boy prank film full of dirty language and dirty scenes, so it isn’t for everyone. That is a shame, since I think if the movie had been cleaned up a little and if the falling dictator had been left alive, it really could have been an important political comedy on its own merits. As it is, the paranoid North Korean regime, by its thundering denunciations at the least, and perhaps by more sinister actions, has managed to make it important.