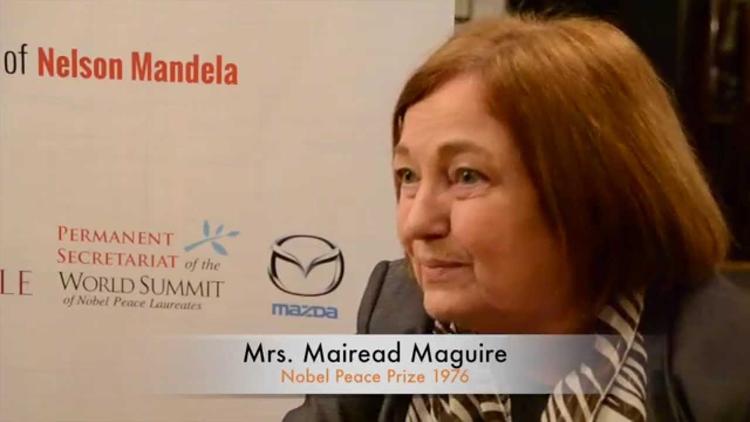 BELFAST (IPS) – I recently visited Assisi, the home of St. Francis and St. Clare, two great spirits whose lives have inspired us and millions of people around the world.

St. Francis, a man of peace, and St. Clare, a woman of prayer, whose message of love, compassion, care for humans, animals and the environment comes down through history to speak to us in a very relevant and inspirational way.

Today, in the 2lst century, as we the human family face increasing violence, we are challenged to admit that we are on the wrong path, and that we need to find new ways of thinking and doing things from a global perspective.

Peace is a beautiful gift to have in life, and it is particularly treasured by those who have known violent conflict, war, famine, disease and poverty. I believe that Peace is a basic human right for every individual and all people.

Love for others and respect for their rights and their human dignity, irrespective of who or what they are, no matter what religion – or none – that they choose to follow, will bring about real change and set in motion proper relationships. With such relationships built on equality and trust, we can work together on so many of the threats to our common humanity.

Poverty is one such threat and Pope Francis challenges us to take care of the poor, and has declared his desire that the Catholic Church be a church of the poor and for the poor. To meet this challenge, we can each ask ourselves ‘how will what I do today help the poor’?.

Pope Francis also has spoken about the need to build fraternity amongst the nations. This is important because building trust amongst people and countries will help bring peace to our interdependent, inter-connected world.

Violence begets violence as we witness every day on our television screens, so the choice between violence and non-violence, is up to each one of us. However, if we do not teach non-violence in our education systems and in our religious institutions, how can we make that choice?

I believe that all faith traditions and secular societies need to work together and teach the way of non-violence as a way of living, also as a political science and means for bringing about social and political change wherever we live.

A grave responsibility lies with the different religious traditions to give spiritual guidance and a clear message, particularly on the questions of economic injustice, ‘armed resistance‘, arms, militarism and war.

As a Christian living in a violent ethnic political conflict in Northern Ireland, and caught between the violence of the British army and the Irish Republican Army, I was forced to confront myself with the questions, ‘do you ever kill?’ and ‘is there such a thing as a just war?’.

During my spiritual journey I reached the absolute conviction that killing is wrong and that the just war theory is, in the words of the late Fr. John L. McKenzie, “a phony piece of morality”.

I became a pacifist because I believe every human life is sacred and we have no right to kill each other. When we deepen our love and compassion for all our brothers and sisters, it is not possible to torture or kill anyone, no matter who they are or what they do.

I also believe that Jesus was a pacifist and I agree with McKenzie when he writes: “if we cannot know from the New Testament that Jesus rejected violence absolutely, then we can know nothing of Jesus’ person or message. It is the clearest of themes.”

During the last 1700 years, Christians have moved so far away from the Christic life of non-violence that we find ourselves in the terrible dilemma of condemning one kind of homicide and violence while paying for, actively participating in or supporting homicidal violence and war on a magnitude far greater than that which we condemn in others.

There is indeed a longstanding defeat in our theology. To help us out of this dilemma, we need to hear the full gospel message from our Christian leaders.

We need to reject the ‘just war’ theology and develop a theology in keeping with Jesus’ non-violence.

Some Christians believe that the ‘just war’ theory can be applied and that they can use violence – that is, ‘armed struggle/armed resistance’ – or can be adopted by governments to justify ongoing war.

It is precisely because of this ‘bad’ theology that we need, from our spiritual or religious leaders, a clear message and an unambiguous proclamation that violence is not the way of Jesus, violence is not the way of Christianity, and that armaments, nuclear weapons, militarism and war must be abolished and replaced with a more human and moral way of solving our problems without killing each other.

In this column, Mairead Maguire, peace activist from Northern Ireland and Nobel Peace Laureate 1976, argues that in a world that has moved far from the Christic life of non-violence, a clear message and unambiguous proclamation is needed from spiritual or religious leaders that armaments, nuclear weapons, militarism and war must be abolished.