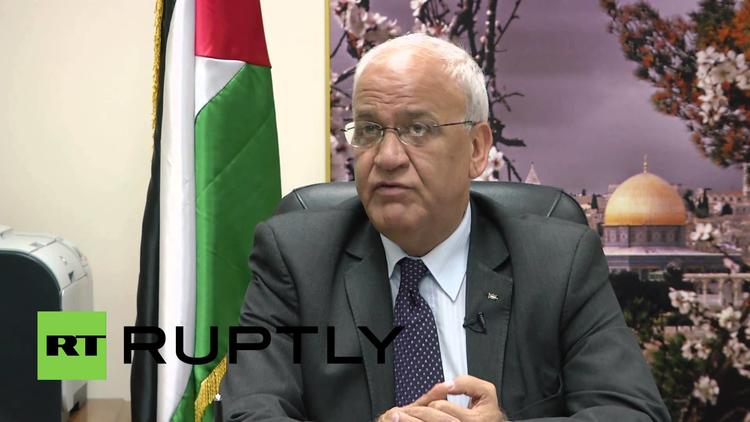 RAMALLAH (Ma’an) — PLO chief negotiator Saeb Erekat said Sunday that a resolution to end the Israeli occupation will be submitted to the UN Security Council “in the coming few hours, or maybe on Monday.”

Erekat told the official Palestinian radio station that he would meet US Secretary of State John Kerry in a European capital in the coming two days.

“We want a clear and specific resolution for a Palestinian state on the 1967 borders with Jerusalem as its capital, resolving all the final status issues, releasing all detainees and refugees and labeling settlement activity illegal and should be stopped immediately, including in Jerusalem,” Erekat said.

Kerry left early Sunday for a series of meetings in Europe seeking to head off an end-of-year UN showdown over the Palestinian bid for statehood.

His first stop was to be Rome where he will meet separately with both Russian Foreign Minister Sergei Lavrov and Israeli Prime Minister Benjamin Netanyahu.

Diplomats say negotiations on a UN resolution to revive Israeli-Palestinian peace prospects are making little headway, with Europeans waiting for a US response to proposals.

Jordan last month circulated a draft Palestinian text to the Security Council setting November 2016 as a deadline for the end of the Israeli occupation.

But the text ran into opposition from the United States, which has veto power, and other countries that felt it lacked balance, diplomats said. It was never put to a vote.

France stepped in last month to try to cobble together along with Britain and Germany a resolution that would win consensus at the 15-member council.

And the Palestinians have said they would like a draft resolution to go to a vote before the end of the year.

The text would call for a return to negotiations with a view to achieving a two-state solution by which Israel and a Palestinian state would co-exist.

Negotiations have hit hurdles over whether to include a two-year deadline for talks on a final settlement to be completed.