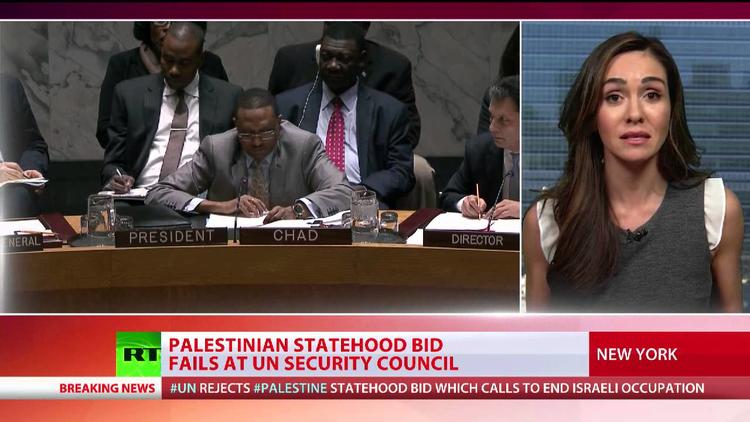 The UN Security Council yesterday voted down an Arab League resolution on Palestine that would have called for an end to Israeli occupation of Palestinian territories within 3 years and a return to 1967 borders. Similar resolutions were passed by the UN Security Council in past, but this time the motion could not collect the 9 votes to pass. It in any case would have been vetoed by the United States (the five permanent UNSC members can shoot down any resolution they like).

It should be noted that France, Russia and China did vote for the resolution, and they represent a significant swathe of the human population, as well as being a majority of the permanent members (the UK abstained, but said it was not because London opposed the resolution in principle). Russia said that the nearly 70 year old conflict was contributing to the production of radicalism in the region.

Palestine president Mahmoud Abbas was approaching the UNSC so as to clear the way, when the resolution inevitably failed, for approaching other forums. It now seems likely that Palestine will join the International Criminal Court by signing the Rome Statute, and will press its case there. But the US has strong-armed Abbas not to take this step, and going to the UNSC helps blunt US condemnations, wince everyone could see that he tried.

Had the resolution been presented to the UN General Assembly, it would have passed overwhelmingly.

The international community has gotten tired of the games the Israelis are playing, in alleging that there is an ongoing ‘peace process.’ There isn’t. The Israelis consistently refuse to negotiate with the Palestinians in good faith, as I argued in The Nation last week. The Israelis are violating the fourth Geneva Convention of 1949 on the treatment of occupied populations, by flooding their own population into the West Bank. They are keeping Palestinians stateless, which denies them all basic human rights.

The world is not going to put up with this situation in Palestine for much longer.