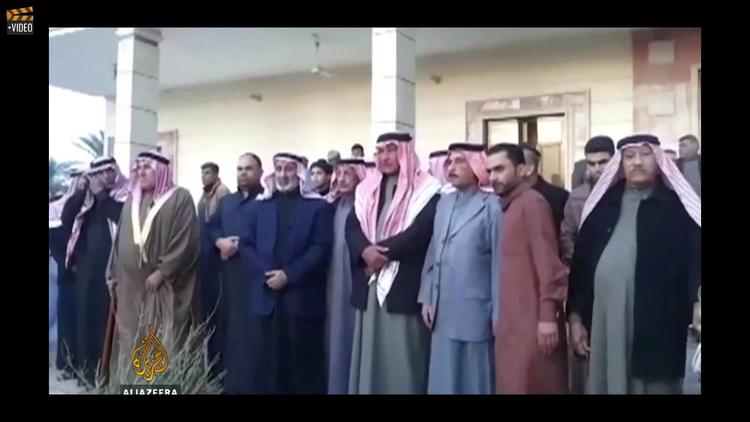 While members of the Sunni Muslim al-Bu Ulwan tribe were fighting extremists in the Anbar province, alongside the mostly Shiite Muslim military, judges in Baghdad sentenced a politician from the tribe to death. The tribe says it feels like Baghdad has stabbed it in the back. Other Anbar locals are left wondering how genuine attempts at reconciliation really are and say they will turn to the US rather than Baghdad.

Late last month, fighters from the extremist group known as the Islamic State began an attack on the Iraqi city of Ramadi. Ramadi and another of the province of Anbar’s most important cities, Haditha, are some of the last parts of the province not under the control of the extremists or their allies.

But this time when the IS group attacked, it was local Sunni Muslim tribes who came together with the Iraqi army to repel the fighters. Members of the al-Bu Ulwan, Abu Risheh and the al-Bu Fahd tribes managed to hold off the IS group’s attack even though the IS fighters came at them from north, west and south. Fighting continues in the area.

The fact that some Sunni Muslim tribes had joined with the mostly Shiite Muslim Iraqi army seemed to be good news for the country. It’s well acknowledged that in order for Iraq to resolve the current security crisis, sectarian and ethnic rifts must be healed and in areas held by the IS group, which are home to a mainly Sunni Muslim population, it is the locals – Sunni Muslims – who must push the extremists out.

But almost immediately there was bad news from Baghdad that seemed to negate the good. It also the dispirited Sunni Muslim tribal leaders who had been fighting the IS group. The news: the Iraqi judiciary had issued a death sentence against a prominent Sunni Muslim MP, Ahmed al-Alwani.

As the BBC reported at the time of his arrest in December 2013, al-Alwani had backed Sunni Muslim protests against the government led by former Iraqi Prime Minister Nouri al-Maliki. Al-Alwani was arrested on charges of terrorism and his capture in Ramadi, after a deadly gunfight, was part of the reason that protests in the area became more heated and violent.

“This verdict is like a knife in our backs from the Iraqi government,” one of the leaders of the al-Bu Ulwan tribe, Hazem al-Alwani, told NIQASH. “The sons of my tribe have been fighting against the IS group for days, helping the Iraqi security forces to prevent Ramadi from falling.”

The case against al-Alwani has been widely criticised. Amnesty International released a statement declaring that the trial had had many irregularities, with al-Alwani denied access to his lawyer and his family, among other things.

The verdict had been postponed previously and now, Hazem al-Alwani thought, the timing of the announcement of a death penalty was strange. “I don’t believe it is a coincidence,” he said. “It seems that there are certain political actors that do not want the Sunni Muslim tribes in Anbar to play any role in the fight against the IS group.”

Part of the problem involves the many Shiite Muslim militias that have also been taking the fight to the IS group. Last week these Shiite Muslim militias – which are unofficial, armed groups that are a law unto themselves and which have been known to act almost as ruthlessly as the IS group – were accused of a variety of atrocities in the areas they had “liberated” from the IS group. Sunni Muslim politicians in Baghdad say the militias killed innocent people and burned houses and mosques in Sunni Muslim-majority areas.

Many locals in Anbar fear the arrival of Shiite Muslim militias like these and they wonder when the Iraqi government will put some of its plans and promises into action. For instance, the idea of forming and arming a National Guard consisting of locals from the areas in which the Guard works. This was supposed to resolve – at least partially – one of the major issues that saw Sunni Muslim locals welcoming the extremists from the IS group into their towns. Before this they felt that the mostly Shiite Muslim Iraqi army soldiers were their enemies, an occupying force. If they could be allowed to form their own security forces from among their own people, they would want to force the extremists out – so the argument goes.

Iraq’s new Prime Minister Haider al-Abadi has been supportive of the idea saying that the government would pay for and help to arm the new National Guard groups. However as yet things are moving too slowly for many of the Sunni Muslim locals in the areas that the IS group partially or completely controls.

“The provinces controlled by the IS group have started to lose patience because the government in Baghdad hasn’t even started forming the new National Guard units,” Iraqiya MP, Nahida al-Dayni, told NIQASH.

Some suggest that a number of the Sunni Muslim tribes in Anbar are trying to circumvent Baghdad altogether.

“There’s secret information that suggests a delegation from Sunni Muslim tribal leaders and local officials from Anbar, Salahaddin, Diyala and the city of Mosul have been meeting since November 29 to discuss the future of their cities,” Karim al-Mahlawi, a tribal leader in Anbar, told NIQASH.

Al-Mahlawi says his cousin was part of one of the delegations and that the delegation took their complaints about Baghdad’s reluctance to act on any of its resolutions to US officials, arguing that some Shiite Muslim political actors were trying to delay the arming of Sunni tribes in Anbar and to prevent the tribes from confronting the IS group.

The US officials apparently said they would do their best to pressure the government about forming National Guard units. However providing weapons to a new National Guard without the Iraqi government’s permission might only anger Baghdad and neighbouring Iran, to whom some of the Shiite Muslim politicians were loyal to.

Additionally Baghdad has some very genuine concerns about what those National Guard units would do next – fight against the Shiite Muslim-led government? Fight one another? Fight the Shiite Muslim militias? Start attacking other provinces?

Sources suggest that Baghdad has actually tried to negotiate with some of the tribal leaders in the Anbar province to get them to stand with the Iraqi government, and to prevent them from negotiating directly with the US. Some of the Sunni Muslim tribes in the area are prepared to do this while others are insisting they should remain neutral.

It is uncertain what will happen next in Anbar. Whatever does happen though, any likely outcome will see the IS group lose territory and power in the troubled province.