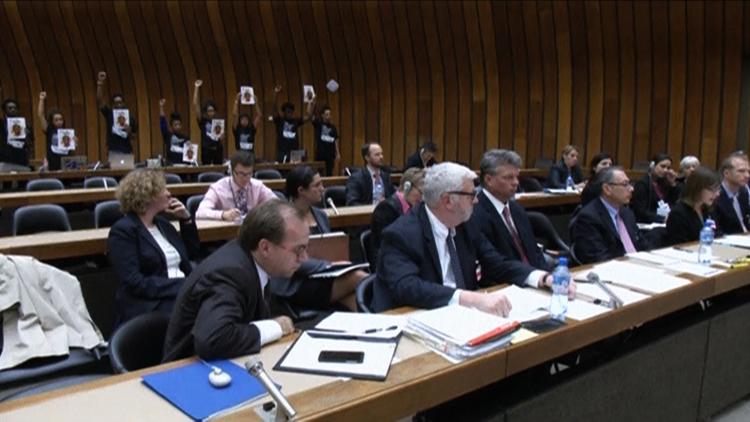 At long last – despite the attempts at sabotage by, and over the protests of the CIA, and notwithstanding the dilatory efforts of the State Department – the Senate Select Committee on Intelligence has finally issued the executive summary of its 6,300-page report on the CIA’s detention and interrogation program. We should celebrate its publication as a genuine victory for opponents of torture. We should thank Senator Dianne Feinstein (whom some of us have been known to call “the senator from the National Security Agency”) for her courage in making it happen.

Like many people I’ve got my criticisms of the Senate report, which you can read about elsewhere. Suffice it to say that we’ve still got work to do if we want to end U.S. torture.

We now know something about the Senate report, but many folks may not have heard about the other torture report, the one that came out a couple of weeks ago, and was barely mentioned in the U.S. media. In some ways, this one is even more damning. For one thing, it comes from the international body responsible for overseeing compliance with the UN Convention Against Torture and Other Cruel, Inhuman or Degrading Treatment or Punishment – the UN Committee Against Torture. For another, unlike the Senate report, the UN report does not treat US torture as something practiced by a single agency, or that ended with the Bush administration. The UN Committee Against Torture reports on U.S. practices that continue to this day.

* The United States still refuses to pass a law making torture a federal crime. It also refuses to withdraw some of the “reservations” it put in place when it signed the Convention. These include the insistence that only treatment resulting in “prolonged mental harm,” counts as the kind of severe mental suffering outlawed in the Convention.

* Many high civilian officials and some military personnel have not been prosecuted for acts of torture they are alleged to have committed. It would be nice, too, says the Committee, if the U.S. were to join the International Criminal Court, where other torturers have already been successfully tried. If we can’t prosecute them at home, maybe the international community can do it.

* The remaining 142 detainees at Guantánamo must be released or tried in civilian courts, and the prison there must be shut down.

* Evidence of U.S. torture must be declassified, especially the torture of anyone still being held at Guantánamo.

* While the U.S. Army Field Manual on Human Intelligence Collector Operations prohibits many forms of torture, a classified “annex” still permits sleep deprivation and sensory deprivation. These are both forms of cruel treatment which must end.

* People held in U.S. jails and prisons must be protected from long-term solitary confinement and rape. “Supermax” facilities and “Secure Housing Units,” where inmates spend years and even decades in complete isolation must be shut down. As many as 80,000 prisoners are believed to be in solitary confinement in U.S. prisons today – a form of treatment we now understand can cause lasting psychosis in as short a time as two weeks.

* The United States should end the death penalty, or at the very least declare a moratorium until it can find a quick and painless method of execution.

* The United States must address out-of-control police brutality, especially “against persons belonging to certain racial and ethnic groups, immigrants and LGBTI individuals.” This finding is especially poignant in a period when we have just witnessed the failure to indict two white policemen who killed unarmed Black men, Michael Brown in Ferguson, Missouri, and Eric Garner in New York City. Like many who have been demonstrating during the last few weeks against racially selective police violence, the Committee was also concerned about “racial profiling by police and immigration offices and growing militarization of policing activities.”

Why should an international body focused specifically on torture care about an apparently broader issue like police behavior? In fact, torture and race- or identity-based police brutality are intimately linked by the reality that lies at the foundation of institutionalized state torture.

Every nation that uses torture must first identify one or more groups of people who are torture’s “legitimate” targets. They are legitimate targets, because in the minds of the torturers and of the society that gives torture a home, these people are not entirely human. (In fact, the Chilean secret police called the people they tortured “humanoids.”) Instead, groups singled out for torture are a uniquely degraded and dangerous threat to the body politic, and therefore anything “we” must do to protect ourselves becomes licit. In the United States, with lots of encouragement from the news and entertainment media, many white people believe that African American men represent this kind of unique threat. The logic that allows police to kill unarmed Black men with impunity is not all that different from the logic that produces pogroms or underlies drone assassination programs in far-off places, or that makes it impossible to prosecute our own torturers.

At 15 pages, the whole UN report is certainly a quicker read than the Senate committee’s 500-page “summary.” And it’s a good reminder that, whatever President Obama might wish, this is not the time to close the book on torture. It’s time to re-open the discussion, to hold the torturers accountable, and to bring a real end to U.S. torture.

Rebecca Gordon writes about political philosophy, theories of justice including questions of race and gender justice, and their application in the world. An adjunct professor at the University of San Francisco, she is the author of Mainstreaming Torture: Ethical Approaches in the Post-9/11 Period Oxford: 2014 (Oxford: 2014). She received her MDiv and PhD from Graduate Theological Union.