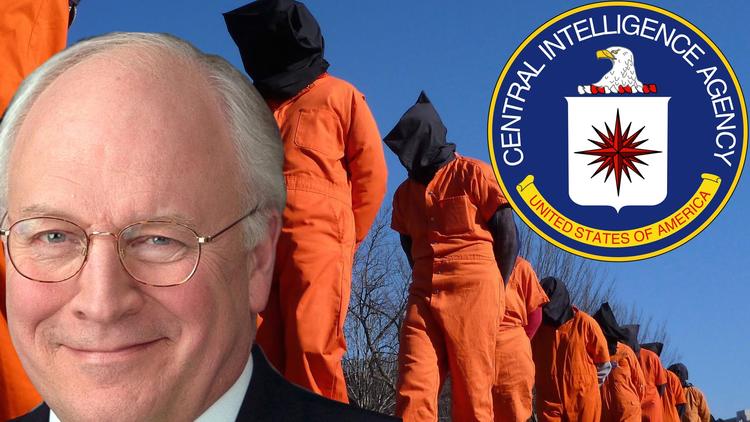 The hall at the International Criminal Court in the Hague was packed today as the trial began of former US Vice President Richard Bruce Cheney [they always give all three names of suspected felons in the newspaper.]

The ICC justices begin with the first charge, that Mr. Cheney ordered the torture practiced by the Central Intelligence Agency on over 100 prisoners, 21% of them later recognized to have been falsely accused. Prisoners were abused anally, waterboarded, slammed against walls, threatened, an arm was broken, one died from exposure. Mr. Cheney denied that these techniques were torture, to the astonishment of sitting senators. And he continues to advocate the continuation of these methods.

Cheney’s attorneys object. “Your honors, there is no evidence that Cheney ordered torture.”

One of the judges leans over the bench. “Is it not true that Mr. Cheney told NBC News on September 16, 2001, “We also have to work, though, sort of the dark side, if you will.”?

Attorney: “That is not proof that he ordered torture.”

Judge: “He used the first person plural, “we,” and he used the imperative, “have to.” The very grammar indicts him. Moreover, he said in 2011 that he continued strongly to urge the use of waterboarding on prisoners. He is committed to the dark side.”

Judge: “The US tried and hanged Japanese war criminals for waterboarding.”

Attorney: “Those individuals actually carried out waterboarding. They did not simply advocate their use.”

Judge: “Julius Streicher was quite rightly hanged after the Nuremberg Trials for having done no more than write newspaper articles urging crimes against humanity.”

Attorney: “Surely you are not calling Dick Cheney a fascist and war criminal?”

Judge: “Let us move on to the next charge. Mr. Cheney launched a war of aggression on Iraq, under false pretenses, that was illegal in international law and has led to hundreds of thousands of deaths.”

Judge: “Iraq had no weapons of mass destruction, and UN inspectors continually said so. In any case, there are only two grounds for war in the United Nations charter: 1) self-defense and 2) UN Security Council authorization of the use of force against a danger to world order. Iraq did not attack Mr. Cheney’s country, and the UNSC did not authorize the use of force.”

Attorney: “The US Congress authorized the war.”

Judge: “Unfortunately for your client, we consider that to be just another war crime by a different branch of government, not exculpatory.”

Attorney: “Mr. Cheney was not the commander in chief and could not order that war. George W. Bush was on top of the issues and in complete control.”

Attorney: “It was worth a try.”

Judge: “They kept Cheney informed of the torture program but not George W. Bush or Colin Powell. This was Cheney’s baby. Not only did Mr. Cheney launch an illegal war of aggression, he set off a chain of further crimes. The Nuremberg judgement observed, “To initiate a war of aggression . . . is not only an international crime, it is the supreme international crime differing only from other war crimes in that it contains within itself the accumulated evil of the whole.” Mr. Cheney is also responsible for the torture at Abu Ghraib, for massacres of non-combatant populations, and for the displacement of 4 million Iraqis. He made a fifth of the country homeless and created millions of orphans and widows.

Attorney: “There is no evidence that Cheney ordered any of those things.”

Judge: “Did he advocate them?”

Judge: “You are stalling. What about the outing of Valerie Plame, the CIA undercover field officer whose cover Mr. Cheney blew? Did not President George H. W. Bush say, “Even though I am a tranquil guy now at this stage of my life, I have nothing but contempt and anger for those who betray the trust by exposing the name of our sources. They are in my view the most insidious of traitors.”? ”

Attorney: “That was Richard Armitage and Bob Novak.”

Judge: “Cheney was the one who ordered Scooter Libby and other staffers to attempt to out Ms. Plame. They assiduously called journalists with this story. It was materials they left lying around that came to Mr. Armitage’s attention. It was only an accident that Novak ran with the story before one of Mr. Libby’s journalistic contacts could be convinced.”

Attorney: “Outing a CIA officer is not a crime in international law, only in US law.”

Judge: “We’ll be sure to forward the dossier to the US authorities.”

Attorney: “The US authorities already dismissed Ms. Plame’s suit on the grounds that Cheney was just doing his job.”

Judge: “That is why we are holding these proceedings at the Hague.”