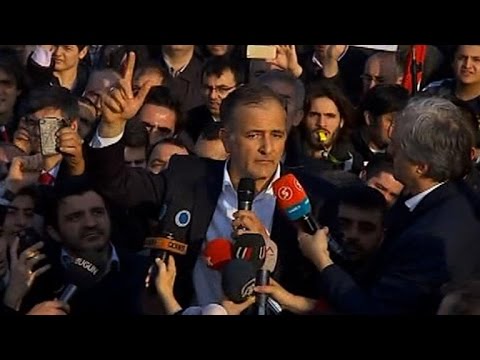 If we read the recent government-ordered police raids against opposition media in reverse, we can get a better sense of how last year’s bribery and corruption investigation (December 17-25, 2013) — targeting figures connected to Turkey’s ruling Justice and Development Party (AKP) — hit close to the mark in exposing unlawful networks of patronage and nepotism in the highest AKP ranks.

The tense atmosphere began with last summer’s protests in Gezi Park against the “mall and mosque” building frenzy of the AKP’s successful, if unbridled, “Islamic capitalism.” (For more on the intersection of market capitalism and conservative values, see Vali Nasr’s The Rise of Islamic Capitalism.)

The array of social groups that rose up in protest against the AKP government found and continue to find the neoliberal order of the AKP lacking in concern for the environment, labor rights, women’s rights, pluralism and the rule of law, and oppose what they see as the pious and materialistic attitude of the Turkish Islamic bourgeoisie.

It came as some surprise that one of these opposition groups turned out to be a former AKP ally, Hizmet (or “Service”) — a transnational Islamic social movement of interfaith dialogue also known as the Gülen movement. The current AKP claim, a flimsy one at best, is that the movement’s leader, Fetullah Gülen, is the terrorist head of an armed illegal organization attempting to overthrow them. Last week they issued a warrant for his arrest (under Article 314 of the Penal Code).

In doing so, the current government has emulated the secular-military authorities of the 1997 “soft coup” era, which had charged Gülen in 2000 with “establishing an illegal organization in order to change the secular structure of the state.” (But it was under AKP rule that he was actually acquitted of charges in 2006 and 2008.)

The slapdash use of terrorism laws to silence political opposition has become a trademark AKP tactic. Doctors, lawyers and journalists who tried to help protestors at Gezi were also drawn up on such charges. (See this Amnesty International report) In the eyes of the ruling party, it seems that any dissent is indicative of an attempted “coup” against the government and dissenters can be charged accordingly.

There is a level of absurdity here. The Istanbul Beşiktaş soccer fan group çArşı was even drawn up on charges of “terrorism” due to its involvement in the Gezi protests. They are accused, like the writers and journalists arrested last week and all the rest, of undertaking to overthrow the government in a “coup” (Article 312 of the penal code). A çArşı leader quipped, “If we had the power to undertake a coup, we’d make Beşiktaş [the league] champion.”

And in a fury that can only be described as “blind,” the AKP has spent a year increasing the scope of its legal, executive, and judicial power and patronage, squashing the bribery and corruption investigation, and laying the groundwork for this December’s counterattack against Gülen and the media groups with which he is associated. The government reassigned thousands of police, charged hundreds of protesters, changed laws, and consolidated the power of the executive branch. (See this Human Rights Watch report) They also established a new system of “criminal courts of peace” that serve the AKP’s legal needs in criminalizing legitimate activity.

And they are attempting to remove the authority of Union of Chambers of Engineers and Architects (TMMOB) to file legal cases against the AKPs rampant urban renewal projects, which often involve the expropriation of public land. This gives the AKP full freedom to undertake massive, unregulated development projects like the presidential palace (completed), the third bridge (under construction), the Çamlıca mosque (under construction), the third Istanbul airport (planned) and Canal Istanbul (“the second Bosphorus”, planned). As is often overlooked in the international media, the Gezi redevelopment plan was only one site in a vast network of real estate speculations in Istanbul’s construction “boom”. (For an interactive map of mega projects in Istanbul, see: http://www.megaprojeleristanbul.com/)

Since December 17, 2013, the AKP has further established the purity of a one-party state, in which, ironically, strong election returns have justified anti-democratic measures. The new order in Turkey champions crony capitalism and conservative values over democracy and pluralism. The vast patronage and nepotism networks that keep this apparatus functioning now include not only the judiciary and the legislative branches of government, but the gendarmerie and the police.

On December 17 last week, the first anniversary of the bribery investigations, President Erdoğan, speaking from Konya, stated that that date conjured up nothing but Şeb-i Arus (the “Night of Union”), which is the celebrated occasion of the death of Jelaleddin Rumi, the thirteenth century Islamic mystic and founder of the Mevlevi dervish order. His “mystification” of party corruption was a message to his supporters and opponents to forget about all of it in an embrace of Rumi’s creed of openness and oneness.

December 17 also happened to be the tenth anniversary of Turkey’s unanimous acceptance by the EU to become an official candidate country. Membership prospects have gone from bad to worse in ten years, and in light of the recent wave of arrests, Freedom House has called on the EU to freeze the accession process. Two years earlier Erdoğan had given the EU a hard deadline to decide on Turkey’s membership: 2023. The implication was that he would still be in power then.

The AKP not only has a vision to maintain its hold on power until 2023, the centennial of the establishment of the Republic of Turkey, it actually has an advertising campaign that promotes this vision. In a democracy one can always dream … But in what kind of political system does blind loyalty to the party and the leader take precedence over the rule of law?

Erdağ Göknar is Associate Professor of Turkish & Middle Eastern Studies at Duke University and core faculty member of the Duke Islamic Studies Center. Göknar teaches the popular “Geopolitics & Culture from Bosnia to Afghanistan” course. Orhan Pamuk, Secularism and Blasphemy: The Politics of the Turkish Novel (Routledge, 2013) is his latest book. He is also a regular contributor to ISLAMiCommentary.