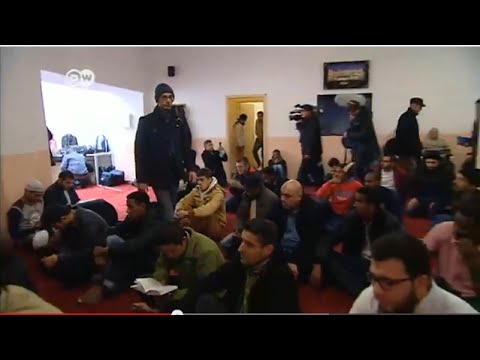 The thinly veiled hate group PEGIDA, which says it is against the “Islamization” of Germany (by which it means it wants German to be Muslimrein or purified of Muslims), staged a demonstration of 18,000 in the eastern city of Dresden on Monday, in the wake of the Paris terrorist attacks. Some of those who marched dressed up like German Chancellor Angela Merkel, but in a Muslim scarf. (PEGIDA was not able to get very many people out except in Dresden, suggesting that they are primarily a regional movement resentful of the imperfect integration of the formerly Communist east into the new Germany.) About 4,000 in Dresden joined a counter-demonstration.

Monday’s was the second big demonstration in Dresden sponsored by PEGIDA. DeutscheWelle reported on the unease of Dresden Muslims (2.5% of the city) in the aftermath of the first demo:

The right wing Alternative for Germany party has aligned itself with the PEGIDA movement.

On Monday, in response to PEGIDA, Merkel affirmed that “Islam belongs to Germany.”

Some 57% of Germans say in polls that they feel threatened by Islam. A country of 80 million, Germany has 4 million Muslims, 2/3s of them Turks. About half of these Turks of Muslim heritage, however, hail from the Alevi Shiite minority in Turkey, and many Alevi families became secular leftists in the 1960s and 1970s. So most Turkish Muslims are not interested in Sunni fundamentalism. Moreover, only about half of resident Muslims are citizens, so they are not in a position to ‘Islamize’ anything, even if they wanted to– which most do not. In polling, Germans give unrealistically high estimates of how many Muslims they think there are in the country.

Germans have very small family size and the country is projected to fall from 80 million to only 60 million by 2050, thus falling behind France, which is growing through immigration. Merkel’s government appears to favor emulating the French policy, encouraging immigration, to avoid Germany losing its economic and demographic leadership role in Europe.

But growing through immigration involves becoming a truly multicultural society. And Merkel had earlier opposed multiculturalism, declaring that experiment dead. She now, however, seems to be changing her mind about that, impelled by a desire to distinguish her center-right Christian Democrats from anti-immigrant and intolerant political forces much to her right.

On Tuesday, the cosmopolitan city of Berlin, the country’s capital, replied with a massive demonstration in favor of tolerance. Similar pro-tolerance rallies throughout the country were joined by 100,000 persons.

Remarkably, Chancellor Angela Merkel joined the Berlin rally. Not only that, but she had unambiguously affirmed that Islam belongs to Germany.

Wulff’s successor as president, Joachim Gauck, in 2012 walked back Wulff’s pronouncement. He said, “It isn’t Islam that belongs to Germany or forms part of our Western culture; but the Muslims, who live here, do belong to it.”

Gauck thus seemed to want to draw a distinction between Islam, which he saw as alien to German traditions, and German Muslim citizens, who, he admitted, formed part of the German nation. This sounds to me like the people who say it is all right to be gay as long as one doesn’t practice it. Gayness would be rejected, but gays accepted as people. That’s the kind of distinction Gauck seemed to be drawing between the alienness of Islam and the belongingness of German Muslims.

Merkel seems to have been closer to Wulff’s view than to Gauck’s. She said in Sept. 2012, “to say that Islam does not belong to Germany– I find it surely false.” So, she was asked, “if Islam forms part of us.” She replied, “I find, yes.” On Monday, she made it clear that she did agree with Wulff.

Wolfgang Bosch, a Rhein-Bergisch Christian Democrat MP, objected. “Which Islam is meant? Does that apply to Islamist and Salafi movements?” He added, “Also the Sharia does not at all belong to Germany.

At the Berlin rally, Merkel spoke for tolerance:

“To exclude groups of people because of their faith, this isn’t worthy of the free state in which we live. It isn’t compatible with our essential values. And its humanly reprehensible. Xenophobia, racism, extremism have no place here.”

President Joachim Gauck added, “Germany has become more diverse through immigration – religiously, culturally and mentally. This diversity has made our country successful, interesting and likeable.” Gauck is a former East German dissident and Protestant pastor.

One leader of AFG, Bernd Lucke, insisted, “If we’re honest about it, Islam is foreign to Germany,” according to Reuters.

Just as a historical note, the Habsburg Empire that ruled Spain, Portugal and parts of northern and central Europe, including some of what is now Germany in the 1500s and 1600s, ruled over many Muslim subjects, including in Morocco and West Africa. The unified German state of the late 19th and early 20th century ruled over Muslims in what is now Tanzania. Goethe paid homage to the Iranian Persian poet, Hafez, in his “East-West Divan.” Germany has produced some of the greatest modern scholars of Islam. The heritage of Islam in historical Germany is not inconsiderable.