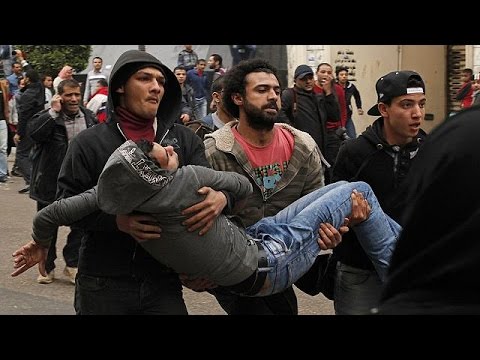 In a great irony, the Egyptian government attempted to cancel the commemoration of the January 25 revolution four years ago, on the grounds that the late King Abdallah of Saudi Arabia needed to be mourned. The Saudis played a sinister behind-the-scenes role in undermining budding Egyptian attempts at democracy, and appear to be complicit in the coup against the Muslim Brotherhood government of Muhammad Morsi in 2013 (though to be fair, that government was very widely hated).

As it was, dissidents from the left and from the Muslim religious right did manage to mount rallies to protest the authoritarian turn of the current Egyptian government. The police reacted horribly, deploying live ammunition at the protesters– killing 18 and wounding 52.

National security police and plainclothesmen had a heavy presence throughout the capiteal of Cairo.

About 1,000 leftists marched in memory of secular activist Shaima al-Sabbagh, who was killed at a Talaat Harb Square rally in downtown Cairo on Saturday.

The government of Abdel Fattah al-Sisi has just banned protests by fiat in the absence of a parliament. It has also conducted a fierce and largely successful campaign to silence and marginalize the Muslim Brotherhood, which is being blamed for the violence in the Egyptian press. Tens of thousands of Muslim Brothers are in jail, in addition to some liberals and leftists.

Supporters of the revolution rue that two of its leaders, Ahmad Maher of the April 6 Youth Group and Alaa Abdel Fattah, a blogger, are in jail on charges of illegally protesting, while dictator Hosni Mubarak and his sons have been released from prison at least for the moment.