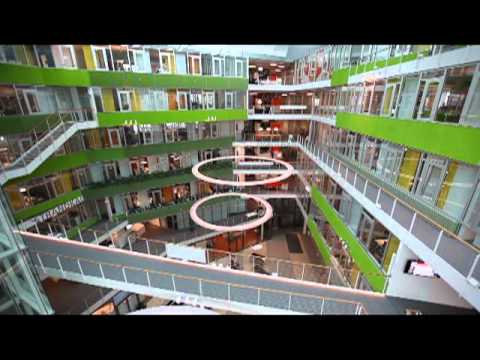 An app that combines the affordability of ride sharing with the reliability of taxis. Playgrounds built as sponges for reusable greywater. From Finland to California, the cities of the future are here.

1. A bus that will pick you up anywhere in the city with the use of a smartphone app.

By 2025, public transportation in Helsinki will be so good that no one living in the city will have any reason to own a car.

That’s the goal the city announced earlier this year, and Helsinki is serious about it. The Helsinki Regional Transport Authority is piloting an on-call minibus service called Kutsuplus. The service uses an algorithm and a smartphone app to combine the affordability of ride sharing with the on-call service of a taxi.

Riders hail buses on a smartphone; an automated system routes and reroutes the fleet to create the most efficient service for patrons heading in the same direction. It’s cheaper than a taxi and more convenient than a bus.

Free wi-fi and storage for bikes or strollers are included, too. Compared with traffic jams, parking fees, and car maintenance, on-demand public transit in Helsinki is looking pretty good.

At Herron Park in South Philadelphia, monkey bars and sliding poles sit on top of a recycled rubber play surface that absorbs water like a sponge. Meandering pathways direct water into gardens filled with native Pennsylvania trees and shrubs. Even the basketball court is designed with an asphalt mixture that percolates water into the soil below.

Nearby, Wharton Street Lofts offers apartments with city views from the building’s green-roof deck, while a greywater system captures and reuses rainwater on-site. Just a few years ago, both locations were almost entirely covered in concrete and asphalt.

The 2011 plan commits $2.4 billion to turn the city from grey to green within 25 years. It’s a blueprint for a new urban landscape that sends water into the soil instead of down the pipe.

3. Finally, an easy way for property owners to invest in renewable energy.

Sometimes bold innovations on a local scale can set the stage for change nationwide. In 2008, the City of Berkeley launched a pilot program to make it easier for property owners to invest in renewable energy.

Berkeley’s program served as a model for the nationwide Property Assessed Clean Energy (PACE) program. Today, PACE financing is available to commercial or residential property owners in more than 800 municipalities. When property owners invest in efficiency upgrades or renewable energy, they save money, reduce carbon emissions, and supply green jobs. With the widespread success of PACE, local governments are clearing the way for investments.

Shannan Stoll wrote this article for Cities Are Now, the Winter 2015 issue of YES! Magazine. Shannan is a freelance writer living in Washington state.

Via a Creative Commons License