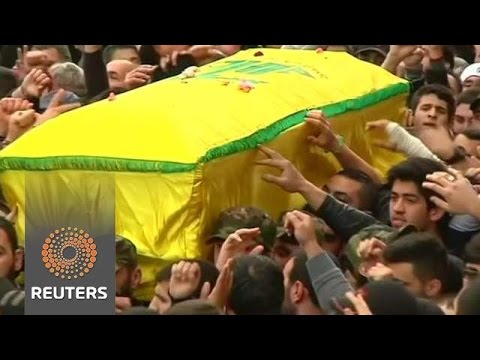 There are several questions around the Israeli helicopter gunship strike on Mazari` al-Amal in Syria’s Quneitra Province, which killed Hizbullah personnel and an Iranian general. First, what were the latter doing there? Second, why did Israel strike them?

The Israeli cover story, that Hizbullah was planning attacks inside Syria from Quneitra, does not make any sense to me. Hizbullah does not control the Syrian territory abutting Israel. Rather, the Golan and much of Quneitra province have fallen to the al-Qaeda affiliate, the Support Front (Jabhat al-Nusra) and a patchwork of other rebels, including some moderates. The Syrian army and its Lebanese and Iranian allies have been pushed northeast toward Damascus, and their counter-offensive this winter failed miserably. Hizbullah does control territory on the Lebanon-Israel border. So if the strike was out of fear of Hizbullah machinations against Israel, why hit them relatively deep in Syrian territory where they couldn’t do anything to Israel, rather than on the Lebanese border where they could?

Two explanations for the Israeli strike on Mazari` al-Amal occur to me:

1. It was merely opportunistic. The Israeli government has a vendetta with the Mughniya family, which Israeli forces pushed out of their farms in what is now northern Israel in 1948 (there were 7 Shiite villages that were erased in northern Israel). Imad Mughniya was assassinated in 2008 in Damascus, likely by Israeli intelligence, after a career as a sanguinary guerrilla who fought the Israeli occupation of south Lebanon 1982-2000. His son Jihad had recently emerged as a capable Hizbullah commander and was among those killed on Sunday. Hizbullah is notoriously penetrated by moles for Israel, and if one of them specified Mughniya’s location and that of an Iranian general, the Israelis may have felt that the opportunity was too good to pass up.

2. The Israelis are deliberately trying to throw the war to al-Qaeda by weakening Syrian defenses southwest of Damascus and helping the radical Support Front take territory nearer Damascus. Why they would want to do this is not clear (you’d think they’d be upset to have al-Qaeda as their direct neighbor in Golan, as they do now. They are always complaining about having Hamas-controlled Gaza as a neighbor but they aren’t fazed by having al-Qaeda as one?)

So personally I think the explanation that they just had an opportunity to take out people they saw as dangerous to them or to their goals in the long term is the more likely one. But they have at least to be all right with the likely outcome that al-Qaeda has been strengthened on their borders.

The Christian-owned Lebanese newspaper an-Nahar asks the essential question, of what in the world Hizbullah commanders and a general of the Iranian Revolutionary Guards were up to in Quneitra Province (southwest of Damascus) near the Syrian part of the Golan Heights (part of Golan has been occupied by Israel since 1967).

The answer is that they were trying to roll back advances by al-Qaeda/Support Front and its radical and moderate de facto allies, southwest of the capital and near the border with Israel. As a result, an-Nahar reports, the rebel forces said they welcomed any strike on Hizbullah, from no matter where it originated (i.e. even if it was from their common enemy, Israel). A leader of the moderate Brigades of the Sword of Syria said the foreign Lebanese Hizbullah had come into Syria to help the al-Assad regime massacre the Syrian people.

A Syria Press bureau reporter and the Syrian activist Maher al-Hamdan told An-Nahar that Mazari` al-Amal, where the Lebanese and Iranians were located, is between the districts of al-Mashati and Hadar to the north, Tel al-Ahmar and `Ain al-Nuriya to the south, rebel-held Taranja to the west, and Nab` al-Fawwar and `Ain al-Nuriya to the east. It is a fertile agricultural region, inhabited by only about 100 persons. (Quneitra is a province southwest of the capital of Damascus, the southern 80% of which has fallen to al-Qaeda and the northeastern 20% of which is still in regime hands).

The area has a Syrian government military barricade belonging to the 220th unit of military security. Al-Hamdan said that the weapons there are machine guns and heavy artillery, and the Israeli strike targeted these Syrian forces, which are the first line of defense for the Bashar al-Assad regime.

The Israeli raid, then, was not limited to hitting Hizbullah, since this area is considered a target rich environment for Israel. Al-Hamdan remarked that the area had military equipment of Russian provenance to spot drones, as well as Russian advisers, a Hizbullah military unit, and Iranian Revolutionary Guards tasked with protecting the Russian advisers.

In the past 6 months, the regime had lost 80% of Quneitra province as well as the entirety of the Syrian-held portion of the Golan Heights, to al-Qaeda/Support Front and its allies. And then last October rebels took al-Hara and its strategic hilltop, Tel al-Hara. At the same time, the rebels captured modern Russian military equipment there. The al-Assad government then sent troops into the region in a counter-offensive. 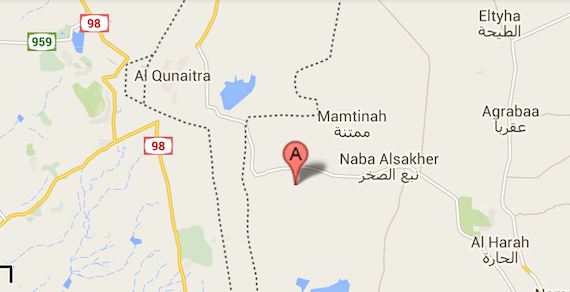 The Damascus regime rushed to build military posts in Tel al-Sha`ar and Tellat Ahmar, as well as forward operating bases in Mazari` al-Amal and nearby places. Some 24 Syrian garrisons were reinforced in this way after the fall of Tel al-Hara, and the regime made an attempt to recover its lost territory in the area, supported by Iranian Revolutionary Guards and Hizbullah.

The counter-offensive failed, so the regime adopted a defensive posture in the area to protect the 20% of Quneitra province that had not fallen. Hizbullah commander Jihad Mughniya was in charge of this defensive effort.

An-Nahar’s sources allege that in addition to the 5 Hizbullah personnel and the one Iranian Revolutionary Guards Corps (IRGC) commander killed, One Russian expert was lightly wounded, and 13 Hizbullah and IRGC personnel were wounded.

There had been no battles in Quneitra for about 20 days between the regime and al-Qaeda and other rebel forces, after the al-Assad loyalists had failed to take the town of al-Baath. The al-Assad forces had occasionally shelled al-Qaeda positions. 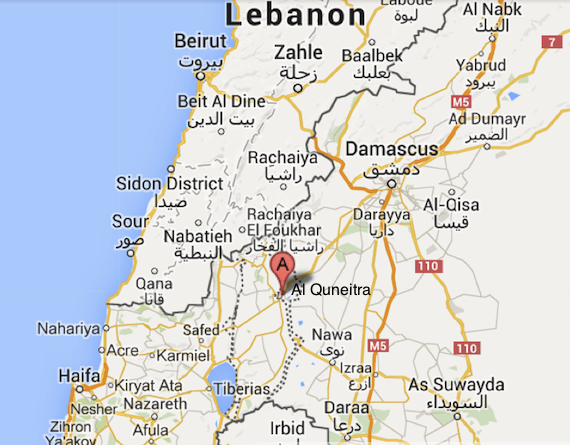