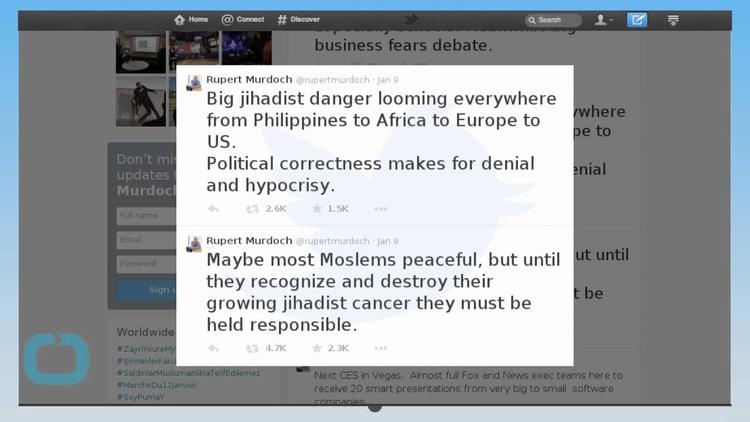 Rupert Murdoch is the billionaire press lord and major shareholder in News Corp., which own Sky News and Fox Cable News. He tweeted after the Paris attacks:

Maybe most Moslems peaceful, but until they recognize and destroy their growing jihadist cancer they must be held responsible.

Big jihadist danger looming everywhere from Philippines to Africa to Europe to US. Political correctness makes for denial and hypocrisy.

But J.K. Rowling, author of the Harry Potter series and more recently The Casual Vacancy, wasn’t having any of it. She slammed the press lord for his notion of imposing collective guilt on mere co-religionists:

I was born Christian. If that makes Rupert Murdoch my responsibility, I'll auto-excommunicate. http://t.co/Atw1wNk8UX

She had also written, concerning the Muslim who saved Jewish hostages:

The courageous and compassionate actions of Lassana Bathily remind us what 'humanity' ought to mean #Paris http://t.co/6tQHEbsOWI

Rowling appears to have worked some magic on Murdoch, who sheepishly admitted her point about the Muslim heroes who pushed back against the Paris atrocities. Chastened, he worte on Sunday:

Extraordinary scenes in Paris today, but do not forget the heroic sacrifice of Ahmed Merabet, Muslim police officer whose funeral was today.

Rowling also retweeted a couple of other interventions supporting her point against Murdoch’s collective guilt thesis– this one:

.@dom209 The Spanish Inquisition was my fault, as is all Christian fundamentalist violence. Oh, and Jim Bakker.