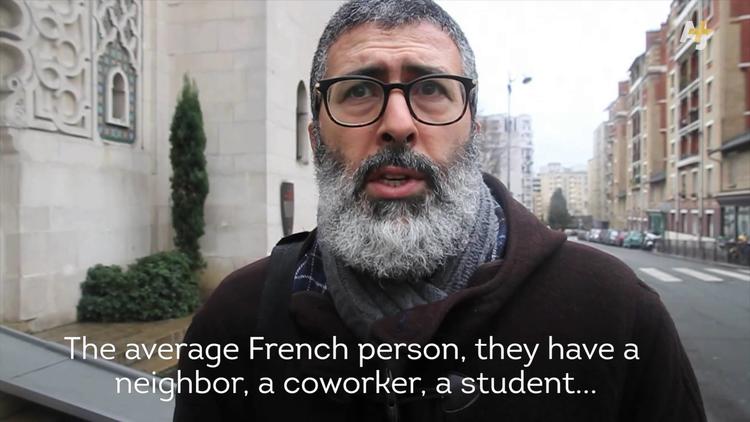 French President Francois Hollande addressed the Institute of the Arab World on Friday, in a bid to reassure French Muslims, who fear being the victims of a collective guilt campaign or reprisals after the attack of radicals on Charlie Hebdo.

“It is the Muslims who are the first victims of fanaticism, fundamentalism and intolerance…

We must remember that . . . Islam is compatible with democracy, and that we must reject lumping everyone together or mixing them up with one another, and must have in France French of Muslim faith who have the same rights and the same duties as all citizens.

They must be protected. Secularism helps in this regard since it respects all religions… Anti-Muslim actions, like Antisemitism, must be denounced and severely punished…

France was formed by movements of population and the flux of immigration. It is constituted by the diversity of what is in France. A number of my compatriots have attachments in the ARab world, coming from North Africa or the Near East. They might be Jews, Muslims, Christians, they might be believers or no. But they have a link to the Arab world and they have contributed, generation after generation, to the history of France.

In contrast to the racist discourse of the National Front, which paints Muslims as alien and dangerous and non-Muslim French as monochrome, Hollande adopted an almost American diction of celebration of immigrant communities.

He made the argument that it isn’t importing religion into government (as many states in the Middle East unfortunately do) that guarantees minority rights but rather secular government, which tolerates all religions equally. He is being a little idealistic about actual French secularism as it is enshrined in law and practice, but the general principle is correct. Secular government can neutralize religious competition for the state of the sort we have seen in post-Bush Iraq, with all its disasters.

Hollande surely made waves when he put anti-Muslimism on exactly the same level as Antisemitism, and pledged to be as vigorous in combating the one as the other. I haven’t heard any other Western leader go so far as to equate these two.

Otherwise, his acceptance of the Muslim French as full French citizens is extremely important in the hothouse atmosphere of European politics today, where many right wing parties determinedly “other” the European Muslims.

Hollande underlined that France has always received immigrants (otherwise the French would be speaking Celtic languages like Breton (which some 200,000 still do in Brittany in the north). The country is named for a German tribe that immigrated in amongst the Celts, and it speaks an imported language descended from the Latin of Roman conquerors and settlers. It is made up of distinct culture regions, not only Britanny but also Provencale, the Basque country and Alsace-Lorraine. For all residents of France to speak French was an accomplishment of the Bourbons and then the Republic during the past two and a half centuries.

Modern France has actually seen many waves of labor migration– Italians in the nineteenth century, Poles in the early twentieth, North Africans after WW II. Its modern history in this regard has been much more like that of the United States than is commonly relized. In the nineteenth century, France was an early industrializer but underwent a demographic transition so that it had relatively low population growth. Focus-Migration France writes,

In order to alleviate this, France concluded labour recruitment agreements with Italy (1904, 1906, 1919), Belgium (1906), Poland (1906) and Czechoslovakia (1920). At the beginning of the 1930s, France was the second most important country in the world for immigration after the USA by absolute numbers. At that time there were about 2.7 million immigrants living in France (6.6% of the total population).

After the Second World War and during the economic upturn of the 1950s and 1960s, France once again recruited (predominantly male) workers from Italy, Portugal, Spain, Belgium, Germany, Poland and Russia. At the same time, immigration from the former colonies increased due to wars of liberation and the process of decolonisation. As a result of the Algerian War (1954–62) and the subsequent independence of Algeria in 1962, a large number of French settlers and pro-French Algerians moved to France.

In saying that “France was formed by movements of population and the flux of immigration. It is constituted by the diversity of what is in France…” Hollande is presenting an image of France as diverse and dynamic because of its diversity, rather than as closed, racial or culturally exclusive (and thus stagnant). It is a hard case to make given the current atmosphere, and it may well lose the next election. But it is the only healthy way forward. Narrow ethnic nationalism, aside from being built on falsehoods, is a recipe for exclusion and discrimination and vast social pathologies.
—