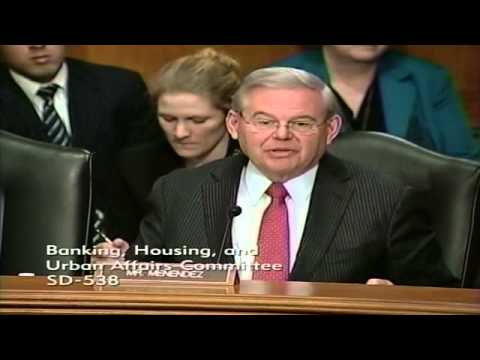 WASHINGTON — A key U.S. senator says he and nine other senators are holding their support for a bill imposing new sanctions on Iran over its controversial nuclear program.

U.S. Senator Robert Menendez (Democrat-New Jersey), co-sponsor of a bill that would impose new sanctions on Iran if there is no deal by the end of June, said at a January 27 Senate hearing that he and nine other Democratic senators sent a letter to President Barack Obama telling him they would not support passage of the bill until March 24.

Menendez and the others said they would support the bill after March 24, “if Iran fails to reach agreement on a political framework that addresses all parameters of a comprehensive agreement.”

The letter says the 10 senators are “hopeful” that diplomacy will succeed but added that they are “deeply skeptical” Iran is ready to make concessions to prove its atomic program is peaceful.

The letter is a victory for Obama, who has vowed to veto any new sanctions bill while talks with Iran are ongoing. The letter comes after U.S. House speaker John Boehner (Republican-Ohio) announced an invitation for Israeli Prime Minister Benjamin Netanyahu to speak to Congress on the threat posed by Iran, without consulting the Obama administration beforehand.

Republicans hold 54 seats in the U.S. Senate. To pass the legislation over a veto, as co-sponsoring Senator Mark Kirk (Republican-Illinois) has been pushing for, they would need the support of those Democrats.

U.S. Deputy Secretary of State Anthony Blinken, testifying at the hearing, said that he had not seen the letter but welcomed the news.

“We appreciate the recognition that our negotiators could use additional time and space,” he said.

All but two of the signatories to the letter were co-sponsors of a previous version of the bill introduced in the last Congress.

The draft legislation sponsored by Senators Kirk and Menendez is not the only proposal floating on Capitol Hill.

The Kirk-Menendez bill is scheduled for markup in the Senate Banking Committee on January 29.