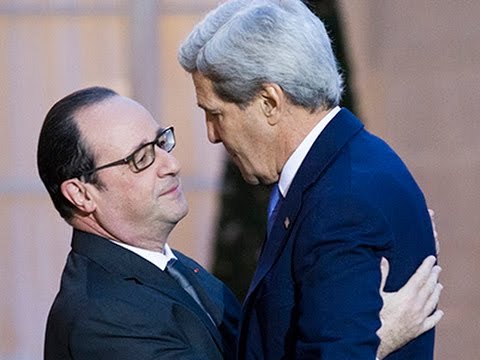 En route back to Washington at the tail end of his most recent overseas trip, John Kerry, America’s peripatetic secretary of state, stopped off in France “to share a hug with all of Paris.” Whether Paris reciprocated the secretary’s embrace went unrecorded.

Despite the requisite reference to General Pershing (“Lafayette, we are here!”) and flying James Taylor in from the 1960s to assure Parisians that “You’ve Got a Friend,” in the annals of American diplomacy Kerry’s hug will likely rank with President Eisenhower’s award of the Legion of Merit to Nicaraguan dictator Anastasio Somoza for “exceptionally meritorious conduct” and Jimmy Carter’s acknowledgment of the “admiration and love” said to define the relationship between the Iranian people and their Shah.  In short, it was a moment best forgotten.

Alas, this vapid, profoundly silly event is all too emblematic of statecraft in the Obama era.  Seldom have well-credentialed and well-meaning people worked so hard to produce so little of substance.

Not one of the signature foreign policy initiatives conceived in Obama’s first term has borne fruit. When it came to making a fresh start with the Islamic world, responsibly ending the “dumb” war in Iraq (while winning the “necessary” one in Afghanistan), “resetting” U.S.-Russian relations, and “pivoting” toward Asia, mark your scorecard 0 for 4.

There’s no doubt that when Kerry arrived at the State Department he brought with him some much-needed energy.  That he is giving it his all — the department’s website reports that the secretary has already clocked over 682,000 miles of travel — is doubtless true as well.  The problem is the absence of results.  Remember when his signature initiative was going to be an Israeli-Palestinian peace deal?  Sadly, that quixotic plan, too, has come to naught.

Yes, Team Obama “got” bin Laden.  And, yes, it deserves credit for abandoning a self-evidently counterproductive 50-plus-year-old policy toward Cuba and for signing a promising agreement with China on climate change.  That said, the administration’s overall record of accomplishment is beyond thin, starting with that first-day-in-the-Oval-Office symbol that things were truly going to be different: Obama’s order to close Guantanamo.  That, of course, remains a work in progress (despite regular reassurances of light glimmering at the end of what has become a very long tunnel).

In fact, taking the president’s record as a whole, noting that on his watch occasional U.S. drone strikes have become routine, the Nobel Committee might want to consider revoking its Peace Prize.

Nor should we expect much in the time that Obama has remaining. Perhaps there is a deal with Iran waiting in the wings (along with the depth charge of ever-fiercer congressionally mandated sanctions), but signs of intellectual exhaustion are distinctly in evidence.

“Where there is no vision,” the Hebrew Bible tells us, “the people perish.”  There’s no use pretending: if there’s one thing the Obama administration most definitely has not got and has never had, it’s a foreign policy vision.

All of this evokes a sense of unease, even consternation bordering on panic, in circles where members of the foreign policy elite congregate.  Absent visionary leadership in Washington, they have persuaded themselves, we’re all going down.  So the world’s sole superpower and self-anointed global leader needs to get game — and fast.

Leslie Gelb, former president of the Council on Foreign Relations, recently weighed in with a proposal for fixing the problem: clean house.  Obama has surrounded himself with fumbling incompetents, Gelb charges.  Get rid of them and bring in the visionaries.

Writing at the Daily Beast, Gelb urges the president to fire his entire national security team and replace them with “strong and strategic people of proven foreign policy experience.”  Translation: the sort of people who sip sherry and nibble on brie in the august precincts of the Council of Foreign Relations.  In addition to offering his own slate of nominees, including several veterans of the storied George W. Bush administration, Gelb suggests that Obama consult regularly with Henry Kissinger, Brent Scowcroft, Zbigniew Brzezinski, and James Baker.  These distinguished war-horses range in age from 84 to 91.  By implication, only white males born prior to World War II are eligible for induction into the ranks of the Truly Wise Men.

Anyway, Gelb emphasizes, Obama needs to get on with it.  With the planet awash in challenges that “imperil our very survival,” there is simply no time to waste.

At best, Gelb’s got it half right.  When it comes to foreign policy, this president has indeed demonstrated a knack for surrounding himself with lackluster lieutenants.  That statement applies equally to national security adviser Susan Rice (and her predecessor), to Secretary of State Kerry (and his predecessor), and to outgoing Pentagon chief Chuck Hagel.  Ashton Carter, the technocrat slated to replace Hagel as defense secretary, comes from the same mold.

They are all “seasoned”  — in Washington, a euphemism for bland, conventional, and utterly unimaginative — charter members of the Rogers-Christopher school of American statecraft.  (That may require some unpacking, so pretend you’re on Jeopardy.  Alex Trebek:  “Two eminently forgettable and completely forgotten twentieth-century secretaries of state.”  You, hitting the buzzer:  “Who were William Rogers and Warren Christopher?”  “Correct!”)

Members of Obama’s national security team worked long and hard to get where they are.  Yet along the way — perhaps from absorbing too many position papers, PowerPoint briefings, and platitudes about “American global leadership” — they lost whatever creative spark once endowed them with the appearance of talent and promise.  Ambition, unquestioned patriotism, and a capacity for putting in endless hours (and enduring endless travel) — all these remain.  But a serious conception of where the world is heading and what that implies for basic U.S. policy?  Individually and collectively, they are without a clue.

I submit that maybe that’s okay, that plodding mediocrity can be a boon if, as at present, the alternatives on offer look even worse.

A Hug for Obama

You want vision?  Obama’s predecessor surrounded himself with visionaries.  Dick Cheney, Condoleezza Rice, Donald Rumsfeld, and Paul Wolfowitz, products of the Cold War one and all, certainly fancied themselves large-bore strategic thinkers.  Busily positioning the United States to run (just another “i” and you have “ruin”) the world, they were blindsided by 9/11.  Unembarrassed and unchastened by this disaster, they initiated a series of morally dubious, strategically boneheaded moves that were either (take your pick) going to spread freedom and democracy or position the United States to exercise permanent dominion.  The ensuing Global War on Terror did neither, of course, while adding trillions to the national debt and helping fracture great expanses of the planet.  Obama is still, however ineffectually, trying to clean up the mess they created.

If that’s what handing the keys to big thinkers gets you, give me Susan Rice any day.  Although Obama’s “don’t do stupid shit” may never rank with Washington’s Farewell Address or the Monroe Doctrine in the history books, George W. Bush might have profited from having some comparable axiom taped to his laptop.

Big ideas have their place — indeed, are essential — when the issues at hand are clearly defined.  The Fall of France in 1940 was one such moment, which President Franklin D. Roosevelt recognized.  So too, arguably, was the period immediately after World War II.  The defeat of Nazi Germany and Imperial Japan had left a dangerous power vacuum in both Europe and the Pacific to which George Marshall, Dean Acheson, and their compatriots forged a necessary response.  Perhaps the period 1968-1969 falls into that same category, the debacle of Vietnam requiring a major adjustment in U.S. Cold War strategy.  This Richard Nixon and Henry Kissinger undertook with their opening to China.

Yet despite the overwrought claims of Gelb (and others) that America’s very survival is today at risk, the present historical moment lacks comparable clarity.  Ours is not a time when we face a single overarching threat.  Instead, on several different fronts, worrisome developments are brewing.  Environmental degradation, the rise of China and other emerging powers, the spread of radical Islam, the precarious state of the global economy, vulnerabilities that are an inevitable byproduct of our pursuit of a cyber-utopia: all of these bear very careful watching.  Each one today should entail a defensive response, the United States protecting itself (and its allies) against worst-case outcomes.  But none of these at the present moment justifies embarking upon a let-out-all-the-stops offensive.  Chasing after one problem would necessarily divert attention from the rest.

The immediate future remains too opaque to say with certainty which threat will turn out to pose the greatest danger, whether in the next year or the next decade — and which might even end up not being a threat at all but an unexpected opportunity.  Conditions are not ripe for boldness.  The abiding imperative of the moment is to discern, which requires careful observation and patience.  In short, forget about strategy.

And there’s a further matter.  Correct discernment assumes a proper vantage point.  What you see depends on where you sit and which way you’re facing.  Those who inhabit the upper ranks of the Obama administration (and those whom Leslie Gelb offers as replacements) sit somewhere back in the twentieth century, their worldview shaped by memories of Munich and Yalta, Korea and Vietnam, the Cuban Missile Crisis and the Berlin Wall, none of which retain more than tangential relevance to the present day.

You want vision?  That will require a new crop of visionaries.  Instead of sitting down with ancients like Kissinger, Scowcroft, Brzezinski, or Baker, this president (or his successor) would be better served to pick the brain of the army captain back from multiple combat tours in Iraq and Afghanistan, the moral theologian specializing in inter-religious dialog, the Peace Corps volunteer who spent the last two years in West Africa, and the Silicon Valley entrepreneur best able to spell out the political implications of the next big thing.

In short, a post-twentieth century vision requires a post-twentieth century generation, able to free itself from old shibboleths to which Leslie Gelb and most of official Washington today remain stubbornly dedicated.  That generation waits in the wings and after another presidential election or two may indeed wield some influence.  We should hope so.  In the meantime, we should bide our time, amending the words of the prophet to something like: “Where there is no vision, the people muddle along and await salvation.”

So as Obama and his team muddle toward their finish line, their achievements negligible, we might even express a modicum of gratitude.  When they depart the scene, we will forget the lot of them.  Yet at least they managed to steer clear of truly epic disasters.  When muddling was the best Washington had on offer, they delivered.  They may even deserve a hug.

Andrew J. Bacevich, a TomDispatch regular, is writing a military history of America’s War for the Greater Middle East. His most recent book is Breach of Trust: How Americans Failed Their Soldiers and Their Country.