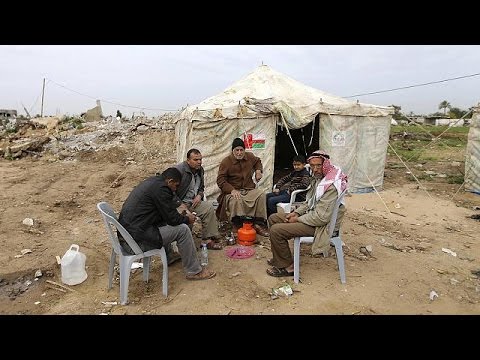 BETHLEHEM (Ma’an) — A massive shortfall in the $5.4 billion pledged for Gaza’s reconstruction by the international community last October is exacerbating an already dire humanitarian crisis for Palestinians displaced by Israel’s summer offensive.

On Tuesday, the UN agency for Palestinian refugees, the largest service provider in the Gaza Strip, announced that it was forced to stop a cash assistance program for tens of thousands of Palestinians to make repairs to damaged and destroyed homes.

“The generous pledges that were made in Cairo need to to be translated into money in the bank, and that money has not arrived,” UNRWA spokesman Chris Gunness told Ma’an.

UNRWA has so far only received $135 million since the conference — leaving a shortfall of $585 million — and that money has been distributed to 8,000 Palestinians for reintegration payments and 7,000 for cash assistance.

Around 59,000 families also received funding to repair their damaged homes. Those awaiting funding will likely continue to live under tarpaulin tents in the ruins of their properties while at least 12,000 Palestinians remain in 18 UNRWA shelters.

UNRWA’s director in Gaza, Robert Turner, said in a statement that it is “unclear” as to why donors have not fulfilled their pledges.

“People are desperate and the international community cannot even provide the bare minimum — for example a repaired home in winter — let alone a lifting of the blockade, access to markets or freedom of movement.”

A near-permanent closure of the Rafah crossing since October and continued Israeli restrictions on building materials entering Gaza mean the reconstruction process is virtually frozen.

The figures amount to around 4 percent of what used to enter the coastal territory before Israel’s blockade. At current rates, it would take 23 years to meet “immediate needs” for construction, the group said.

A lack of fuel entering Gaza has also led to a severe electricity crisis, compounding the lack of shelter as Palestinians try to stay warm over the winter months.

Earlier in January, two children, aged three and four, died in a house fire in al-Shati refugee camp as families resort to candles and fire wood to stay warm.

At least four people, including three babies, have frozen to death in 2015 due to the extreme cold.

“There has been an unprecedented deterioration in human conditions since the end of the war,” deputy director of the Palestinian Center for Human Rights Hamdi Shaqqura told Ma’an.

“We are shocked by this conclusion. The international community is unable to meet the basic demands of the Gazan people. Gaza is a man-made disaster and requires man-made policies immediately.

“The international community must exact pressure on Israel,” he said.

Issam Younes, director of the al-Mezan Center for Human Rights, says Gaza has been in a continuous reconstruction process for over six years, having suffered devastating structural and human losses in Israel’s 2008-09 military offensive.

Around $4.5 billion was pledged by the international community at a Sharm el-Sheikh conference in 2009 to rebuild Gaza following Cast Lead.

Years later, the funding has yet to materialize.

“People are suffering and all of this while Gaza is under an unprecedented blockade. Electricity is even worse than before (the war), together with other services, and forcing human beings to live on an experimental basis means no-one knows where it will lead,” Younes says.

“Humiliation, the obstruction of reconstruction, Israel’s blockade, you cannot plan and you cannot predict, but it is a very fragile situation.

“People are suffering in this misery. This is the first winter, and who knows how many winters more.”

The politics of reconstruction

The Gaza Reconstruction Mechanism brokered by the UN in September 2014 was to implement rebuilding by boosting Gaza’s private sector and enabling the Palestinian unity government to oversee reconstruction, while assuring donors of their investments and addressing Israel’s stated security concerns.

But the lack of donor funds, restrictions on building materials, Israel’s blockade and internal Palestinian political disputes have stalled the process.

An official contacted by Ma’an at the Norwegian Representative Office in Ramallah — Norway co-hosted the Cairo donor conference last year — declined to comment on why the billions pledged by donors have not materialized.

Nour Odeh, a former spokeswoman for the Palestinian Authority, says that discrepancies between what is pledged and dispersed by donors is a common trend with Palestine, and usually hostage to the political context.

In 2009, the international community effectively refused to deal with a Hamas government in Gaza in implementing reconstruction. But the reasons in 2015 are more complicated.

A financial crisis in the EU, high-level diplomatic moves by the PLO, and the gradual disintegration of the unity government — culminating in a series of tit-for-tat arson attacks on both Hamas and Fatah officials’ cars — have provided a context where donors are unwilling to follow through on pledges.

“A lot of people will find ready excuses in the dysfunctional arrangements internally between Hamas and the national unity government,” Odeh told Ma’an.

On Jan. 3, Israel froze about $127 million owed to the PA after it decided to join the ICC, further intensifying to a salary crisis between the PA and former employees of the Hamas-run government in Gaza.

Odeh says that the Palestinians are used to international sanctions, but warned that money pledged by donors must not be used as a tool to exert political influence.

“It should go without saying that all of these donors are very aware of the risk of leaving Gaza like this, without any hope or any recourse. They cannot leave it like this and expect it to stay under control.”