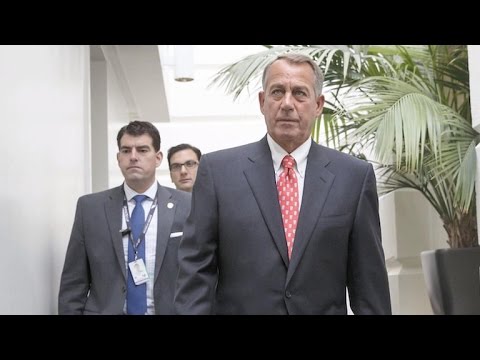 By Jasmin Ramsey | (WASHINGTON (IPS) – While it’s anyone’s guess whether a final deal will be reached over Iran’s nuclear programme this year, a number of key international actors have forcefully weighed in on calls from within the U.S. congress to impose more sanctions on the Islamic Republic.

President Barack Obama reiterated his threat to veto new Iran-related sanctions bills while talks are in progress during his State of the Union (SOTU) address this week.

“It doesn’t make sense,” he said Jan. 20 in his second to last SOTU. “New sanctions passed by this Congress, at this moment in time, will all but guarantee that diplomacy fails—alienating America from its allies; and ensuring that Iran starts up its nuclear programme again.”

The administration’s call to “give diplomacy with Iran a chance” was echoed a day later by key members of the P5+1 (U.S., U.K., France, Russia, China plus Germany), which is negotiating with Iran over its nuclear programme, through an op-ed in the Washington Post.

“…[I]ntroducing new hurdles at this critical stage of the negotiations, including through additional nuclear-related sanctions legislation on Iran, would jeopardize our efforts at a critical juncture,” wrote Laurent Fabius (France), Philip Hammond (U.K.), Frank-Walter Steinmeier (Germany) and Federica Mogherini (EU) on Jan. 21.

“New sanctions at this moment might also fracture the international coalition that has made sanctions so effective so far,” they continued. “Rather than strengthening our negotiating position, new sanctions legislation at this point would set us back.”

Last week, during a joint press conference with Obama at the White House, the U.K.’s Prime Minister David Cameron admitted he had contacted members of the U.S. Senate to urge against more sanctions on Iran at this time.

“[Y]es, I have contacted a couple of senators this morning and I may speak to one or two more this afternoon,” he told reporters on Jan. 16.

“[I]t’s the opinion of the United Kingdom that further sanctions or further threat of sanctions at this point won’t actually help to bring the talks to a successful conclusion and they could fracture the international unity that there’s been, which has been so valuable in presenting a united front to Iran,” said Cameron.

In what has been widely perceived by analysts as a rebuff to Obama’s Iran policy, reports surfaced the day after Obama’s SOTU that the House of Representatives Speaker John A. Boehner had invited Israeli Prime Minister Benjamin Netanyahu—who has made no secret of his opposition to Obama’s approach to Iran—to address a joint session of Congress on Feb. 11.

Netanyahu accepted the invitation, but changed the date to Mar. 3, when he would be visiting Washington for a conference hosted by the prominent Israel lobby group, the American Israeli Public Affairs Committee (AIPAC).

The invite, which was not coordinated with the White House, clearly surprised the Obama administration, which said it would not be receiving the Israeli prime minister while he is in town, citing a policy against receiving foreign leaders close to election dates (the Israeli election will be in March).

While Netanyahu has long recommended hard-line positions on what a final deal over nuclear program should entail—including “non-starters” such as zero-percent uranium enrichment on Iranian soil—he cannot be faulted for accepting the speaker’s invitation, according to the U.S.’s former ambassador to NATO, Robert E. Hunter, who told IPS: “If there is fault, it lies with the Speaker of the House.”

“If the Netanyahu visit, with its underscoring of the political potency of the Israeli lobby on Capitol Hill, is successful in ensuring veto-proof support in the Senate for overriding the threatened Obama veto of sanctions legislation, that would saddle Boehner and company with shared responsibility not only for the possible collapse of the nuclear talks…but also for the increased chances of war with Iran,” he said.

But there’s no guarantee at this point whether the bills at the centre of the battle—authored by Republican Mark Kirk and Democrat Bob Menendez, and another by the chairman of the Senate Foreign Relations Committee, Bob Corker—will garner the veto-proof majority necessary to become legislation.

With the support of the Democratic leadership in Congress, the administration has so far successfully prevented the Kirk-Menendez bill from coming to the floor since it was introduced in 2013.

A growing number of current and former high-level officials have also voiced opposition to more sanctions at this time.

“Israeli intelligence has told the U.S. that rolling out new sanctions against Iran would amount to ‘throwing a grenade’ into the negotiations process,” Secretary of State John Kerry told CBS News on Jan. 21.

“Why would we want to be the catalyst for the collapse of negotiations before we really know whether there is something we can get out of them?” asked former Secretary of State Hillary Clinton this week after opposing new sanctions during a forum in Winnipeg, Canada.

“We believe that new sanctions are not needed at this time,” the Under Secretary of Treasury for Terrorism and Financial Intelligence David Cohen told the Wall Street Journal this week.

“To the contrary, new sanctions at this time, even with a delayed trigger, are more likely to undermine, rather than enhance, the chances of achieving a comprehensive agreement,” he said.

While the battle isn’t over yet, in the wake of Obama’s veto threat and Boehner’s invitation to Bibi, even some of the Democratic co-sponsors of the original Kirk-Menendez bill appear to be moving in the White House’s direction.

“I’m talking to colleagues on both sides of the aisle. And I think they are thinking, and rethinking, their positions in light of the points that the president and his team are making to us,” he said.

CBS This Morning: “Boehner clashes with Obama over Iran, Israel”