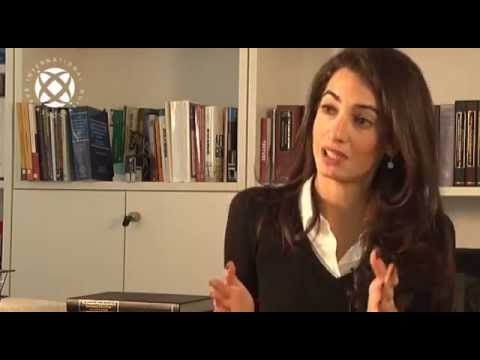 Update: Egypt has announced that Mohamed Fahmy will be retried in Cairo.

Human Rights attorney Amal Clooney, wife of the actor George Clooney, wrote to Egyptian President Abdel Fattal al-Sisi on Saturday, requesting a meeting with him with regard to the fate of her client, Mohamed Fahmy, the former bureau chief of Aljazeera English in Egypt, before the latter was banned. The hapless journalist was arrested for reporting the news over a year ago and falsely charged with criminal conspiracy. Fahmy recently gave up his Egyptian citizenship under duress. Since he had both Canadian and Egyptian passports, he is now just a Canadian.

In order to get the international press off his back, al-Sisi made a law allowing foreigners indicted in Egyptian courts to be deported rather than tried (and to be deported rather than serving their jail term if they had already been sentenced). This provision was used to let Australian journalist Peter Greste leave Egypt on Feb. 1. Rumors are rife that Fahmy will be deported to Canada soon, but Clooney is clearly keeping on the pressure.

In her letter to al-Sisi, she said she wanted to discuss the current state of the case against Fahmy, and ways of freeing him. She said she understood that his Egyptian legal team had been given undertakings that he would soon be released. She wrote that, nevertheless, there had been no movement toward freeing him. She said she wanted to meet with al-Sisi at his earliest opportunity. Egyptian authorities denied a report in the Guardian last month that the London-based Clooney is in danger of being arrested if she comes to Egypt.

One danger is that, even if Clooney can use her new celebrity to pressure al-Sisi into letting Fahmy go, the latter’s colleague, producer Baher Mohamed, only has Egyptian citizenship and so is not eligible for deportation. A new trial has been ordered for him (after a first that was a fiasco for the Egyptian judiciary), and if convicted he could spend long years in jail for simply being a producer on a news program.